Connect with us
Jake Pope has more than 30 scholarship offers and is ready to begin narrowing down his list. (Birm/Lettermen Row)

Ohio State football recruiting can be a wild ride full of twists and turns as recruits from all over the country maneuver their way to signing day. Lettermen Row is here to help navigate the tumultuous roads by getting to the heart of the matter with the young football players and Ohio State coaches and staff members themselves. Today we’re talking with Buford (Ga.) standout Jake Pope, who has offers from a number of the country’s best programs including Ohio State.

Jake Pope doesn’t strike many right away as an athlete who would be courted by a Who’s Who of college football.

The unassuming, 6-foot-1, 190-pound two-sport star at Buford (Ga.) High School is just that, though. The nation’s No. 391-ranked prospect is a 3-star in the 247Sports.com composite rankings — but his offer list tells the real story.

Ohio State, Georgia, Alabama, Notre Dame, Michigan, Auburn, USC and others are making him a priority in the Class of 2022. That’s big time.

But Pope is just a regular kid trying to make sense of the battle he finds himself in at the moment. That task has been made much harder by an inability to visit the schools he’s interested in at the next level. He has 31 offers but recently cut his options by more than half.

He’d like to cut it again soon to begin focusing solely on the schools that he will visit officially this summer. 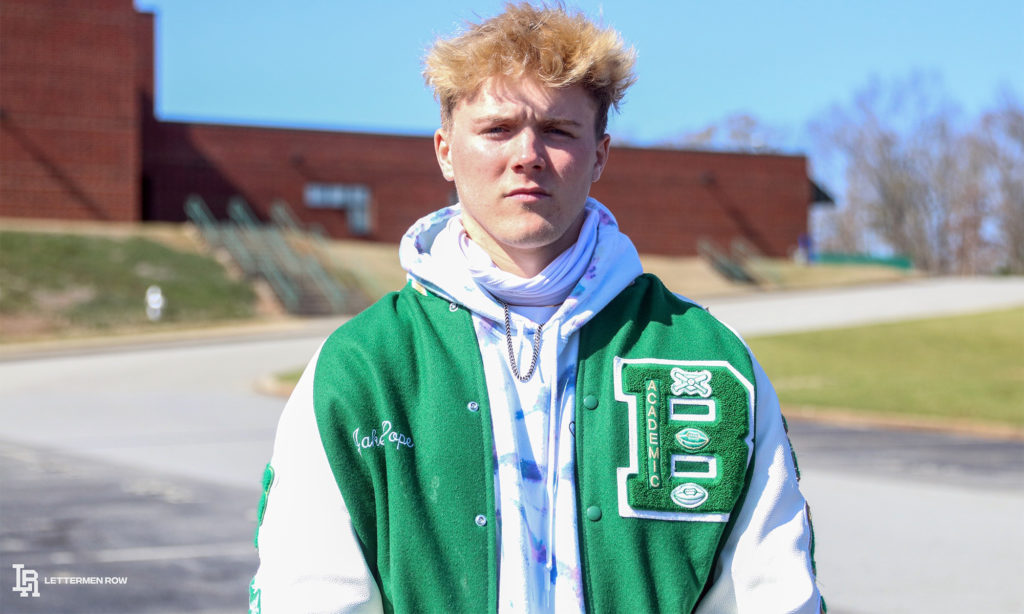 Jake Pope is a Clemson legacy and plays all a key role in all three phases of the game for Buford. (Birm/Lettermen Row)

Ohio State hopes it will be on the next list. That’s why Matt Barnes and Ryan Day have made sure that Pope knows he’s a priority for the Buckeyes. His character and versatility on the field working in his favor as a major draw.

What is Jake Pope looking for as he begins to narrow things down again the future? What impact does Harry Miller have on his recruitment. When does he want to make a college choice? Lettermen Row went to Georgia to talk to Pope about those items and more in the latest edition of Birminology.

Find out what makes this talented young player someone that Ohio State believes fits its program below.