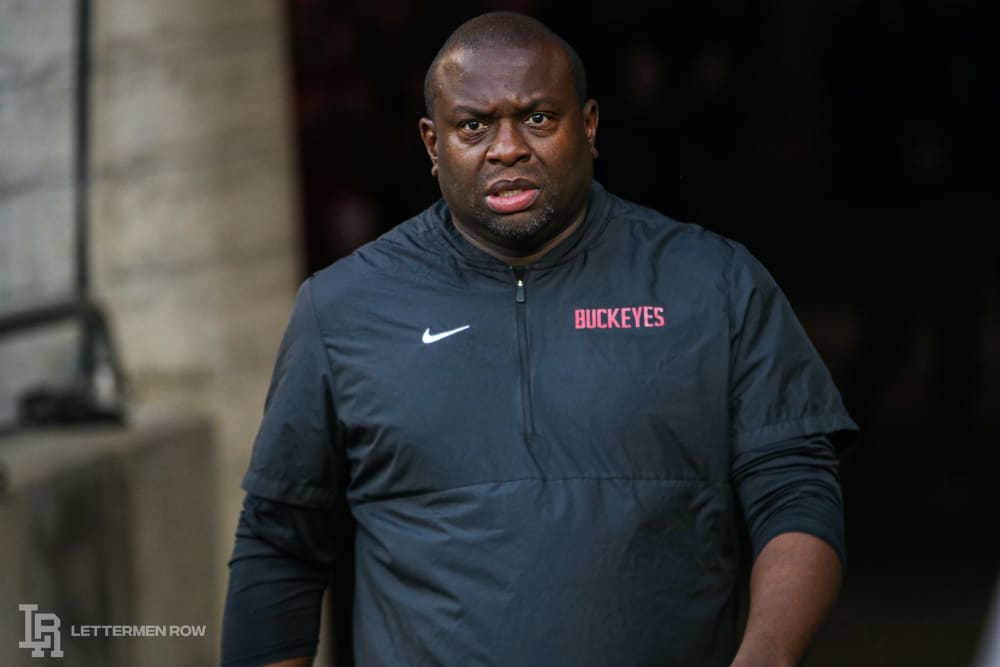 Tony Alford and Ohio State made their pitch to Jahmyr Gibbs. Will it be enough to get him to leave home? (Birm/Lettermen Row)

Have a question about Ohio State recruiting? This is the place for you, five days a week. Submit your questions on Twitter or on the Lettermen Row forums. Check-in daily to see what’s on the mind of Buckeyes fans all over the country. Today’s question tries to read between the lines on running back recruiting, specifically Georgia tailback Jahmyr Gibbs.

Anything on Jahmyr Gibbs?

There’s not much noise coming from Jahmyr Gibbs following his first visit to Ohio State.

That trip, which came over a weekend when the Buckeyes scored 73 points against Maryland in a game where the running backs racked up almost 360 yards rushing, should have been set up pretty perfectly to impress the nation’s No. 22-ranked tailback.

Gibbs, though, remains relatively mum, not expounding much on his trip or his recruiting plans. That’s really who he is, and that doesn’t necessarily mean much. What matters is that he has told people that matter at Ohio State that he’s likely to return for an official visit next month. Still, there’s not an overwhelming sense of optimism emanating from the Woody Hayes Athletic Center when it comes to the odds of flipping the Georgia Tech commit to the Buckeyes.

It’s not even just Alabama, Georgia or LSU that look to be the biggest threat to Ohio State, either. A few weeks ago we wrote about “personality” fits as it pertains to the program, and I think it’s a story worth looking back on as we try to sort out what could happen from here with the soft-spoken but very talented running back. For a young man growing up in the south, even if his dream is to play big-time college football, there’s not any kind of intrinsic pull to Columbus or the Ohio State program.

The Buckeyes aren’t the center of the football universe for every kid in America. They certainly aren’t for Gibbs at this point, and in conversations about the fast-rising prospect, there’s a sense that isn’t going to happen because of his desire to stay closer to his hometown of Dalton, Georgia. That’s why, if the big-time programs that have offered like Alabama or Georgia don’t come calling, or if schools LSU and Florida continue to stay at arm’s length, there’s a real possibility that Gibbs eschews the chance to play at Ohio State and opts to sign with Georgia Tech.

And if that happens, it’s not a result of an insufficient recruiting effort by Tony Alford and the Buckeyes. It’s just the result of a young man having a different set of priorities as he makes the biggest decision of his life than maybe other people would in his unique situation.

For Ohio State, the goal is simple: Get Gibbs back on campus for an official visit. Continue to illustrate to the running back and his family that being a little bit further from home is a compromise worth considering thanks to the benefits of being developed as person and player that the Buckeyes program can provide.