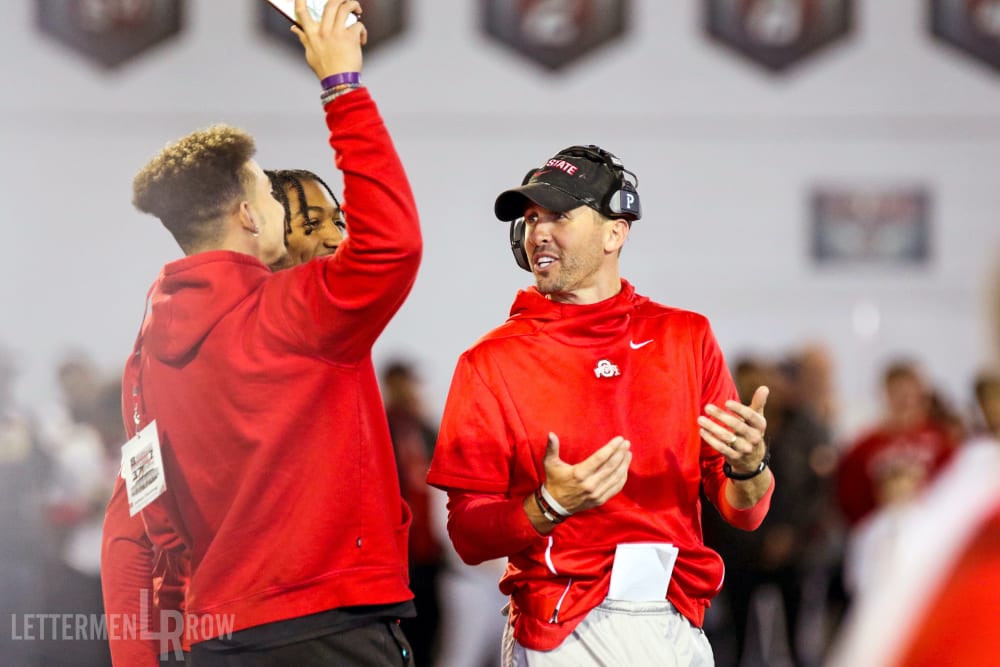 Brian Hartline and Ohio State will have to go back to the well after Rakim Jarrett committed to LSU. (Birm/Lettermen Row)

Have a question about Ohio State recruiting? This is the place for you, five days a week. Submit your questions on Twitter or on the Lettermen Row forums. Check in daily to see what’s on the mind of Buckeyes fans all over the country. This afternoon’s column looks at the Buckeyes receiver recruiting following the weekend commitment of 5-star prospect Rakim Jarrett to LSU.

I think I have a good one…with Rakim Jarrett out (or basically out, see since deleted LSU tweet), how does that effect our chances with Fleming, if at all?

In the event that you missed it this weekend because you were in some Avengers: Endgame and/or Game of Thrones-induced coma, St. John’s College (Washington D.C.) 5-star receiver prospect Rakim Jarrett committed to LSU over the weekend.

The first thing to understand here is that the decision by Jarrett to commit elsewhere shouldn’t be a surprise. He’s shown a remarkable affinity for the recruiting “game” over the months and has left a handful of his previous visits, including both he’s taken to Ohio State, suggesting he wouldn’ve committed on the spot if his mother was with him.

She was at LSU with him, and he’d visited the Tigers earlier this year so the relationship has been building and the vibe on an official visit, the glitz and glamour, etc. it’s easy to get caught up in the vibe and commit.

Either way, LSU or not, the recruitment between Ohio State and Jarrett was not where it once was and had been deteriorating for months. Because of that, the Buckeyes and receivers coach Brian Hartline have been working to build relationships elsewhere as Ohio State searches for an inside receiver to fill the role that was, at one time, “slotted” — pardon the pun — for Jarrett.

But before I dive into those options, let me get to today’s question specifically: there’s absolutely no reason that Rakim Jarrett’s commitment to LSU should impact fellow 5-star receiver Julian Fleming and the way his relationship and recruitment is going with the Buckeyes. Ohio State, Clemson, Penn State, Georgia, Oregon and Alabama are fighting for Fleming and like most package-deal conversations, the hype around a potential team up with him and Jarrett was a little over the top. 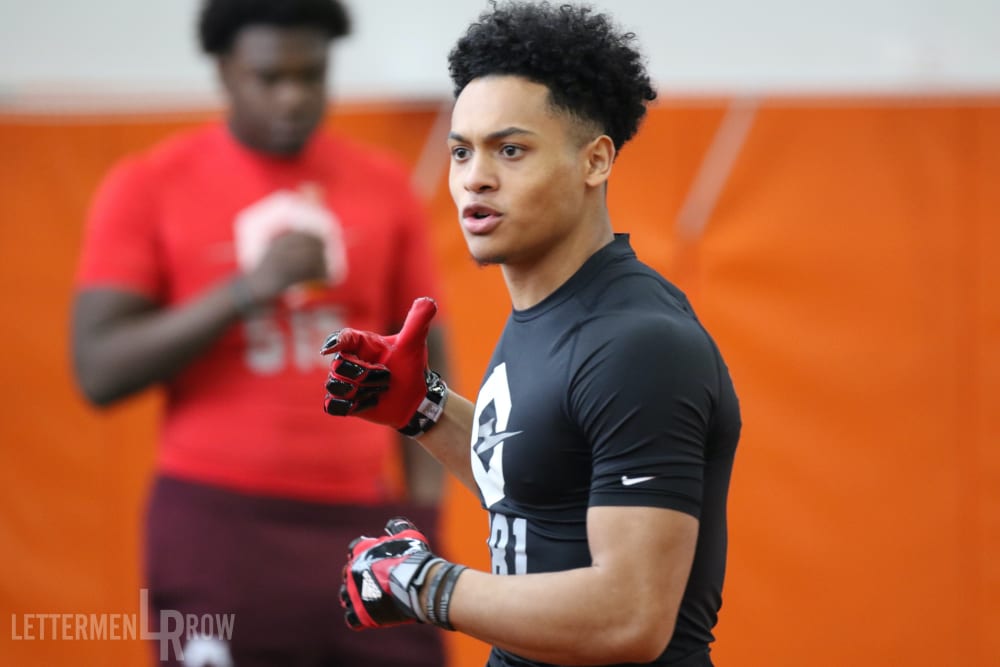 Cam Martinez is able to play offense or defense, but does he want to play at Ohio State? (Birm/Lettermen Row)

So let’s make this a bonus, double answer day, shall we? Who are the receivers that fit the bill as a replacement for Rakim Jarrett?

The first option is probably Muskegon (Mich.) two-way star Cameron Martinez. Martinez is a player capable of playing offense or defense in college but he’s shown this spring that he may be too good with the ball in his hands to put on the defensive side of the football. His relationship with Brian Hartline is good and the Buckeyes are very much in the mix along with Michigan, Northwestern, Penn State and others.

Recently offered receiver Muhsin Muhammad III, a 4-star prospect from Charlotte, pleasantly surprised the Buckeyes coaching staff during a recent evaluation trip and though I think Ohio State is trailing here a bit — it’s hard to make up months of less-than-consistent conversation in a week — Muhammad is a player that really liked the Buckeyes early in the process.

Finally, it’d be shortsighted to assume that Ohio State is out of the mix for St. Thomas Aquinas (Fort Lauderdale) 4-star Marcus Rosemy. Though he’s not yet been to Columbus, sources in South Florida continue to suggest this could eventually be a two-team race between the Buckeyes and the Georgia Bulldogs. Brian Hartline has quickly emerged as one of the top receiving coaches in the country and with a serious need at the position, the fit could be right. As long as Rosemy can get himself to campus sometime in the near future to build on the existing relationship.

LV Bunkley-Shelton is another name to continue watching. The 4-star receiver from Junipero Serra (Gardena, Calif.) raved about his recent visit to Ohio State and the Buckeyes are in a great position to land if they see him as the right fit. Oregon and USC are also involved but the message from Bunkley-Shelton following his trip to Columbus was entirely pro-Buckeyes.