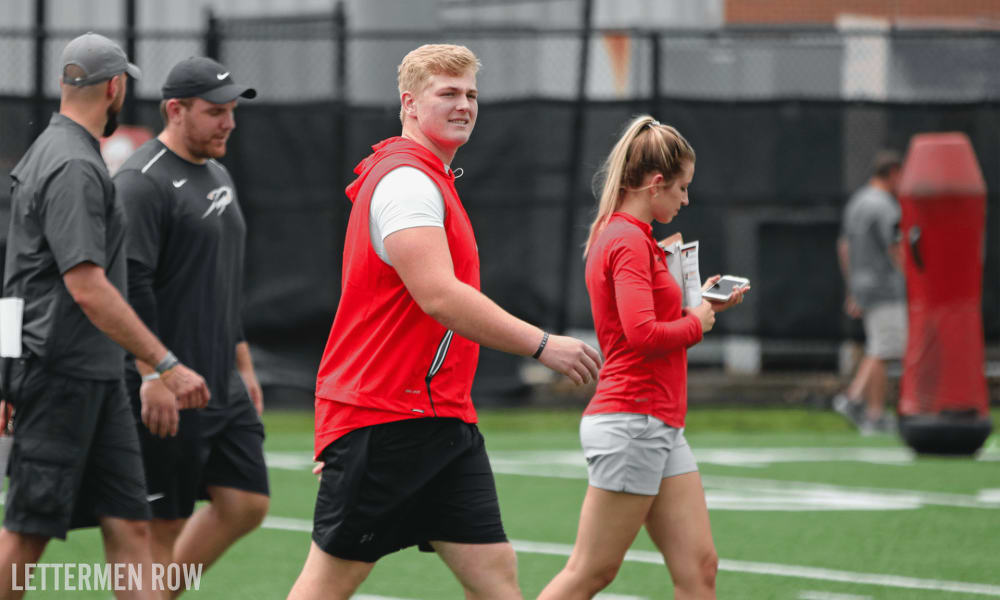 The Ohio State recruiting “beat” is about as well covered as any in the country and because of that, it’s very rare when a big-name player makes a visit to the school and someone isn’t privy to it yet that’s exactly what happened on Friday.

Harry Miller, a 4-star offensive lineman from Buford (Ga.), was on campus with the Buckeyes, not participating in the Ohio State 1-day recruiting camp, but taking it in with his mother.

The visit, and to this point there’s no idea how long he’ll be in town, is important. The country’s second-ranked center will make his college decision sometime in the next month or so, and getting back to Columbus before can only be considered a win for the Buckeyes.

At this point, it’d be a major surprise if Miller committed anywhere other than Ohio State.

There were roughly 500 kids in attendance for Ohio State’s camp today so it’s impossible to see them all. There are some kids though that make it difficult to not notice them, and you can put Massillon (Ohio) Washington 2021 wide receiver Jayden Ballard in that category.

Ballard stands about 6-foot-2 and though he’s not yet filled out physically – he’s just a sophomore-to-be after all – he’s got impressive ball skills and is exceptionally fluid in his movements. He’s a very gifted natural athlete and that’s why today he became the second Class of 2021 prospect in Ohio to earn a Buckeyes offer.

There’s a long way to go in his recruitment and before he can take a college snap, but this is certainly a name to remember in the future.

Speaking of wide receivers, though this one may not have as long to wait for a recruiting decision, Nashville (Tenn.) Franklin Road Academy 4-star Lance Wilhoite made his fifth trip to Ohio State and was very impressive, spending much of the early session getting one-on-one time with Buckeyes wide receivers coach Zach Smith and a small group of receivers.

Wilhoite, almost 6-foot-3 inches tall and 185-pounds, was fast, aggressive with his route-running and did a nice job catching the ball out front of his body and using his hands. He’s a player the Buckeyes have offered and have had considerable interest in and things seem to be trending in a positive direction.

“It was a really good day for me,” Wilhoite told Lettermen Row. “I had a good camp.”

Multiple coaches I spoke with during the camp commented on Wilhoite’s frame and fluidity, noting that he’s still going to get much stronger but that he’s got natural gifts that aren’t able to be taught.

He’s one of a handful of receivers Ohio State has real interest in and there’s a good chance most of those guys will make a decision in the next month or two.