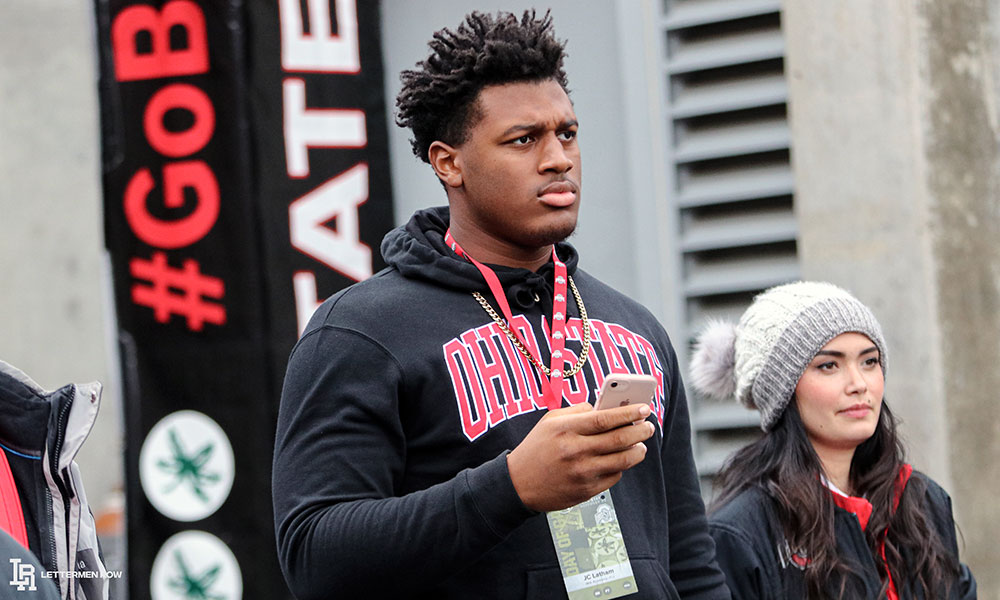 Ohio State target J.C. Latham has not publicly stated if he is still aiming for an April 18 commitment date. (Birm/Lettermen Row)

As Ohio State and the rest of college football continue to be incapable of recruiting in-person, the pressure to create new and innovative recruiting approaches mounts around the country.

How does a coach get to know prospects and their families without the chance to meet them in person? How do programs evaluate a player without getting the chance to see him work out, run track or do any other organized athletic event? That’s the question that hundreds of personnel folks around the nation are working to answer as April barges in.

What are three important recruiting keys for the Buckeyes in April since no on- or off-campus visits will be happening? Lettermen Row is taking a look at the latest recruiting to-do list for Ohio State after a challenging but fulfilling March.

Item One: Ohio State needs to add an offensive lineman

Maybe it sounds greedy, especially after a commitment-filled March, but Ohio State’s top-ranked recruiting class is ready for another big piece. The offensive line is one area that needs help, and a top-of-the-recruiting-board type of player is potentially making an announcement this month.

I say potentially, because right now it is unknown if 4-star offensive tackle prospect J.C. Latham still intends to make a decision on April 18 as he’s been planning. That decision could have been derailed by the inability to make campus visits to Ohio State and LSU — the presumptive leaders in his recruitment — as he intended.

Latham has been to Ohio State twice and has built a very strong relationship with Ryan Day, Greg Studrawa and a host of players already committed to the program. So another visit isn’t really necessary to feel good about a potential commitment, it would have gone a long way toward making Ohio State feel great about it

Because April is going to be dead on the recruiting trail and kids are pretty much forced to stay home with little to do besides talk to coaches, it’s a good time for opponents to work on loosening the Ohio State grip on its current crop of 15 verbal commitments.

For the majority of the current group, that’s not likely to be a problem. But as uncertainty around the future of college football grows and the inability to make visits persists, it is easier to convince young players and their families that maybe now isn’t the time to feel locked into a commitment.

Relationships are always the most important piece of the recruiting puzzle, and the bonds that the Buckeyes coaches have formed with their top-ranked recruiting class will probably never be challenged more aggressively than it figures to be over the next month or two. This isn’t the time to rest on laurels or to celebrate the recent rash of verbals for Ohio State. It’s time to grow its class even tighter than before.

Item Three: Ohio State needs to know when recruiting gets back to normal

This final piece for April isn’t really on the Buckeyes as much as it is on the NCAA. But it’s incredibly important for Ohio State to have a date to point to for recruits when they’re discussing a return to normalcy.

It’s almost impossible to imagine that happens in the next month. But for the Buckeyes and the rest of college football to feel confident in their recruiting approach, it’d sure be helpful to have a soft timeline known for recruits and their families. Planning visits, both unofficial and official, is a daunting task for kids in a normal year. But for people around the country who are now facing serious financial ramifications because of the COVID-19 pandemic, it’s even more of a challenge. That means being able to plan ahead is huge for families trying to sort out their futures.

Getting to camps or making exploratory visits for young prospects, those things are up in the air for recruits. That means they’re up in the air for coaches, too. A return to regular life is not going to happen in April, but for the Buckeyes longterm recruiting efforts, any kind of plan — even one for four months from now — is better than no plan.