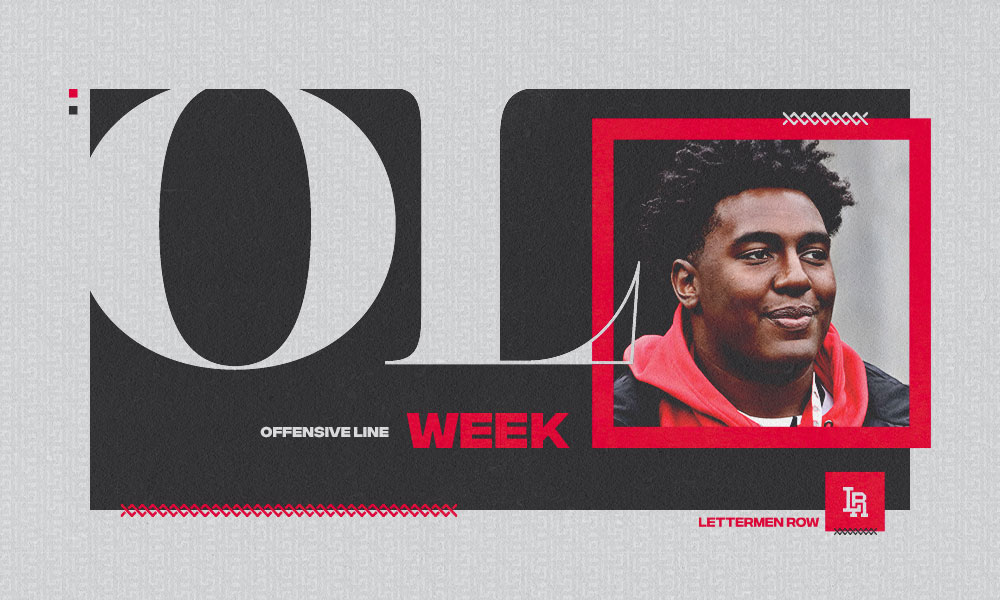 Donovan Jackson wants to be known for a nasty on field disposition and off-field kindness. (Sam Silverman/Lettermen Row)

COLUMBUS — The soft tone in Donovan Jackson’s voice as he describe his playing style makes the harshness of his words feel out of place.

The video tape confirms, though, that his words are true.

“When I put the helmet on, my goal is to take someone’s head off,” Jackson told Lettermen Row earlier this week. “It’s to make sure that my team wins.

The country’s No. 1-ranked guard prospect and 2021 Ohio State commitment isn’t afraid to go to his dark side when the lights come on. Make no mistake, though, he’s equally capable of shining when he takes off the pads.

“He’s just he’s incredibly driven,” Steve Leisz, Jackson’s coach at Episcopal High School (Bellaire, Texas) told Lettermen Row. “And that’s academically and football wise. So wherever he goes, whatever he does, Donovan is all in.” 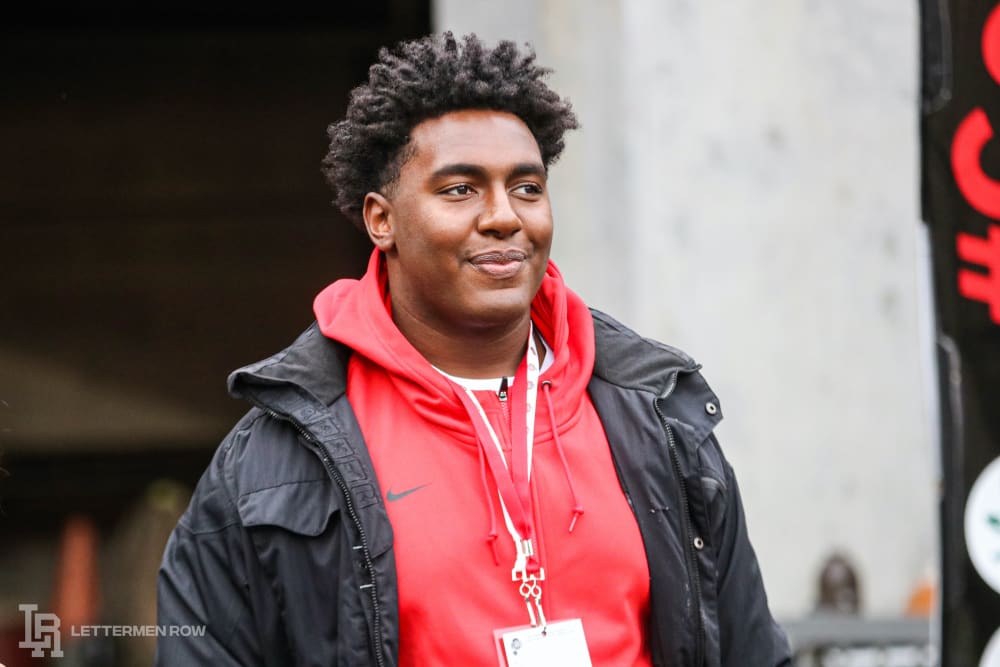 ‘I want to replace me with a better me’

It’s one thing to have the frame to be a college football star, and Donovan Jackson certainly has that.

He’s solidly built at 6-foot-4 and almost 310 pounds. He has long arms that make him a devastating blocker against the run or the pass. But what makes Jackson so rare, such a safe bet to excel at the next level and beyond, is his intelligence and his passion for the game.

“He just he wants to be great, and he wants to learn because he loves football,” Leisz said. “He loves it.”

Jackson is a football sponge. According to his father Todd, his son was identifying coverages and defensive alignments when he was a 6-year-old watching his dad play Madden football video games, and that’s carried over to his role now.

“He’s so coachable,” Leisz said. “He just wants to learn more. Last week Walker Little, one of our alums and a top NFL prospect at Stanford, was in town. He’s one of the top tackles in the country, and was working with [25-year NFL offensive line coach] Pete Alexander. Walker called Donovan over to work out with him, so they’re working out, they are spending time on the smallest little details.

“And that’s what Donovan’s about. He just wants to just get better. Every time he takes the field. He’s told me: ‘Every time I go on the field I want to replace me with a better me.'”

Jackson’s desire to improve is rare. So, too, is his ability to communicate.

That’s one of the reasons he’s become the leader he is for the Knights. He prefers English among his school subjects because he finds it easy to put thoughts into words. It shows when he’s making adjustments called to the field from the press box. It’s the lineman on the headset with his offensive coordinator between series, leading his team.

At Episcopal, accountability is the name of the game. The school has produced a handful of recent college stars, including Alabama receiver Jaylen Waddle, Florida State defensive tackle Marvin Wilson and the aforementioned Little. For Jackson, there’s no football if he’s not the best he can be away from the game.

“His mom and dad wouldn’t put up with it if Donovan wasn’t a leader in our community,” his coach said. “Plus, our school — we’re a high-end academic school — if you don’t cut the mustard, you’re not out there.

“We do this deal with special needs kids in our school and he saw Jaylen Waddle run that show. So what did Donovan do? He wanted to be that guy when Jaylen left. Every year we bring the special needs kids in, give him a jersey and we let them score touchdowns, call their name out and do a lot of dancing. And that’s one of those things that you can’t fake. The kids gravitate towards you, and now you see Donovan Jackson running the plays and the dances. That’s real. That’s a real gift. He kind of he takes charge of that stuff, and he’s always got a smile on his face.” 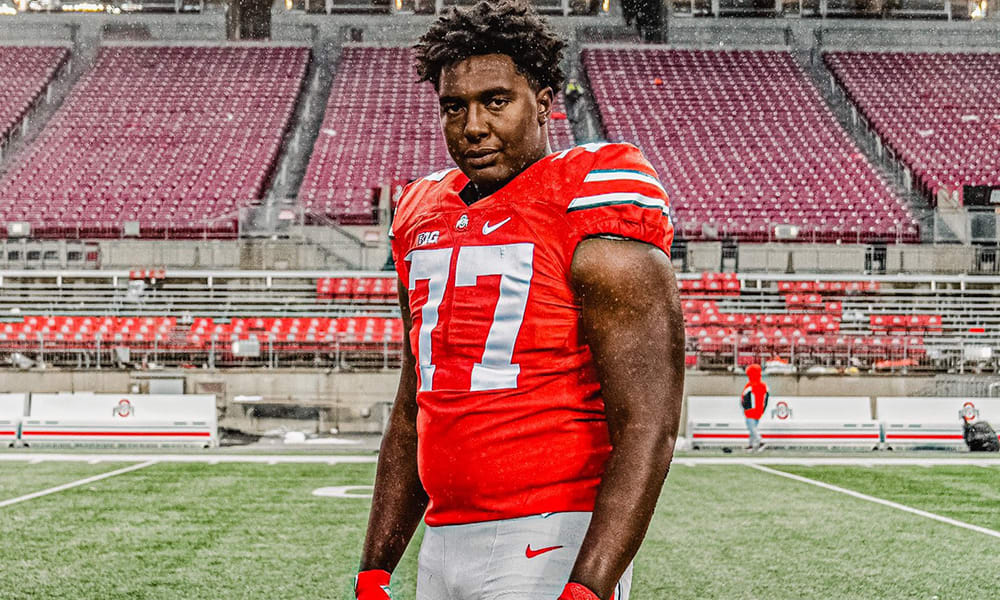 Donovan Jackson can flip the switch

It doesn’t take much for the smile to come off the young lineman’s face. Just blow the whistle.

One of the biggest challenges for young offensive linemen is having the ability to play angry while playing smart. That is not a problem for Donovan Jackson. He may be the nicest kid in the world when he’s off the field, but on it, he’s a different person entirely.

“My parents raised me to be a respectful young man,” Jackson said. “That’s just me. I try to treat everyone I come in contact with with respect, how I’d like to be treated.

“But when I step on that field, it’s like there’s an internal switch. But there has to be a switch, a balance. I can’t be some rough hooligan in the classroom or anything like that. I have to be what my parents taught me to be.”

It wasn’t always that easy to find the switch for Jackson. Like most of his peers, his size advantage made him cautious between the lines. For a kid as nice as he is, there was a worry about hurting his opponent. He had to learn that his size and strength were an advantage, and it’d be folly not to use it.

“In eighth grade, one of my coaches told me, ‘If you’re not nasty on the football field, you won’t be successful,'” Jackson said. “I took his words to heart. Mow, I’m looking to take out at least two to three people. When I don’t do that, that’s when I get upset. I’m mad as heck because I’m like: ‘I didn’t I didn’t get that person I needed to.’

“It just makes me want to go twice as hard.”

According to Leisz, that lesson he learned in in eighth grade has never needed to be retaught.

“He’s nasty, and that’s funny because it’s hard to do that,” Leisz said. “We tell the kids it’s really hard because we have to be leaders on campus, in the classrooms. But when we get on the field, we got to change that.

“We’ve still got to be leaders, but we’ve got to get nasty and and we got to take things to a different level. And he’s such a great individual off the field. But when he flips that switch, Donovan Jackson flips the switch better than most players I’ve ever seen.”

Just listen close — or better yet, watch him go to work.

Continue Reading
You may also like...
Related Topics:Featured, donovan jackson