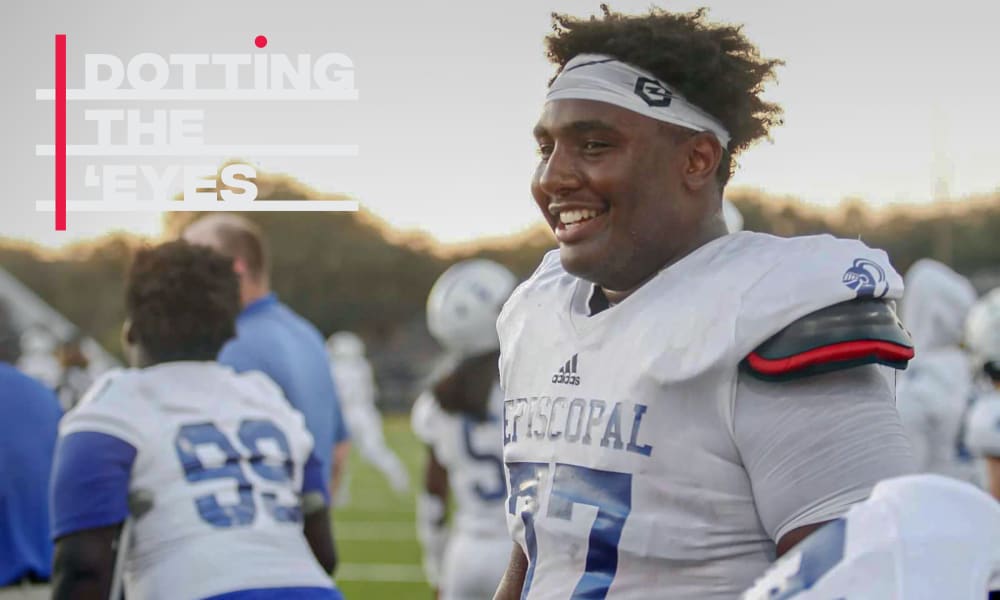 Donovan Jackson is heading north to see Ohio State and to see his family in Cincinnati. (Todd Jackson/Courtesy)

Stay in touch or be left out because Ohio State recruiting is a 24-hour, seven-day-per-week obsession. What’s the latest news as the Buckeyes build for the future? Get that and more Sunday through Thursday on Lettermen Row. Today, we’re examining a big group of offensive line visitors expected to make their way to Columbus for the Ohio State and Penn State game.

It’s been relatively quiet on the recruiting trail for Episcopal (Bellaire, Texas) offensive lineman Donovan Jackson, but that’s been by design. Rather than worrying about visits and offers and things of that sort, Jackson has maintained his focus on a state championship.

That has been delivered.

“Things have been going great,” Jackson told Lettermen Row. “We just brought back the 4A SPC state championship back to EHS. It felt great.”

With that task accomplished, the focus turns to recruiting for the next few months as the country’s No. 46-ranked junior prospect begins to set up visits, starting with a much-anticipated trip to Columbus to see Ohio State this weekend. Jackson has been to see the Buckeyes before — his last visit was the spring game in April — but this is set to be his first actual game-day experience at Ohio State, which is something he’s looking forward to.

“One of the major things I’m checking and looking forward to is the overall atmosphere in Columbus on Gameday,” he said. “I’m not too concerned about the weather. Then I’ll be there on Sunday to sit down with the coaches.”

Though Ryan Day was at the helm during Jackson’s previous visit, this weekend will provide the backdrop for the first in-person meeting between the 6-foot-4, 310-pound lineman and the first-year Buckeyes coach. From what he’s seen so far, Jackson has been impressed by Day.

“I believe he’s done an amazing job, and he has the record to prove it,” the No. 7-ranked Texas junior said. “He’s definitely involved in the recruiting process instead of taking a backseat and waiting until I’m a senior. It’s nice to hear from him consistently.”

Following the visit to Columbus, Jackson and his parents will head to Cincinnati and spend the holiday week in Ohio. As we’ve noted here before, there are strong family ties to the Buckeye State.

Colorado 2021 offensive lineman Trey Zuhn has been to Ohio State multiple times in the last year, and the Fossil Ridge (Fort Collins) 4-star prospect is also set to return this weekend. It’s a trip that could be pivotal in his recruitment.

The No. 2-ranked player in Colorado in the Class of 2021, Zuhn is close to cutting things way down in his recruitment. He’s recently been to Texas A&M and Oklahoma, and it seems this trip to Ohio State could be helping him gain clarity in a battle that right now includes offers from Michigan, Notre Dame, Nebraska, Penn State, Colorado and more. That’s why this weekend is important for a player who was last on campus during camp season in June.

“I feel like I’m a lot farther along in the recruiting process,” Zuhn said. “I think I have my list of schools narrowed down to just three. so it’s really about making sure I can see myself as a Buckeye.

“Are these my kind of people? I love the coaches and everything I’ve heard about the program, but I’ve just got to experience it for me and make sure it all feels real.”

Zuhn is the country’s No. 29-ranked offensive tackle according to the 247Sports.com composite rankings.

Outside of Jackson and Zuhn, there are a number of other big-time offensive line prospects who should be in attendance at Ohio State this weekend.

In the Class of 2020, five of the Buckeyes six offensive line commitments are expected, including Trey Leroux, who will make his official visit to the school. Luke Wypler will not be making the trip over from New Jersey because the St. Joseph’s Regional school will be playing football on Saturday as well.

The class of 2020 is pretty well settled, so that’s more of a bonding opportunity for them rather than a recruiting moment. That group can certainly help Ben Christman and his efforts to get 2021 standouts to join him in the commitment column, though, and there will be a number of major junior prospects in attendance with an offer and Ohio State interest. Here’s a rundown of the guys Lettermen Row knows will be coming.

One of the more interesting things to watch on these big visit weekends is who recruits spend their time with. A lot of kids taking major visits like a trip to Ohio State tend to hang out by themselves or with their families, choosing to soak in the atmosphere that way. With Christman and five 2020 offensive line verbals in the mix, who that group gravitates toward can be telling when it comes to how well a recruit feels he fits into the scene at Ohio State.

Also coming to Columbus this Saturday for the second time in November is Tegra Tshabola from Lakota West High School in West Chester. He’s the odds on favorite to become the Buckeyes first 2022 commitment at this point. Could that happen this weekend? I wouldn’t rule it out despite Tshabola’s intention to “wait a little while” before making a decision.

Should Buckeyes use one of final 2020 spots on offensive line?
Do certain high school programs have more recruiting clout for Buckeyes?