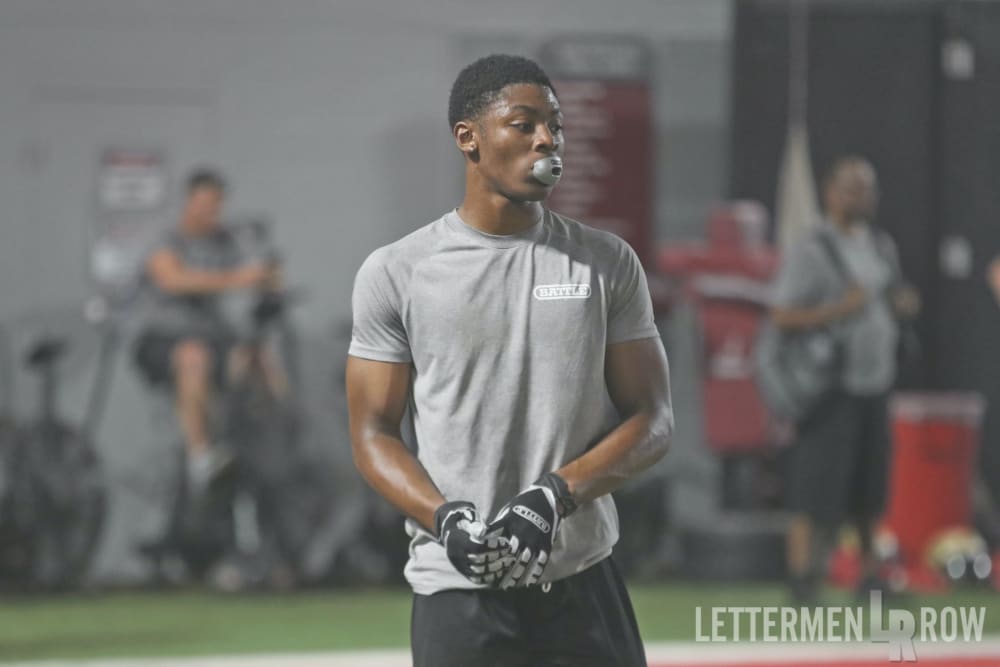 COLUMBUS — It was 2009 when Ohio State last made its recruiting presence felt Monroeville (Pa.) Gateway High School. Luke Fickell was the guy leading the charge at the Western Pa. powerhouse at the time, and helped Jim Tressel’s Buckeyes secure two of the country’s best prospects in that class, 4-star defensive back Corey “Pitt” Brown and 5-star linebacker Dorian Bell.

The next target from Gateway is now firmly established, and its 2021 standout Derrick Davis, Jr.

Get the picture? This is a special talent in the making.

On Friday, Davis, 6-foot-tall and almost 180 pounds, ran a 4.6 in the 40-yard dash at Ohio State then took rep after rep against the best receivers he could find at Ohio State’s 1-day camp.

“It felt good,” Davis said of the camp. “I learned a lot and I took a lot of mental reps. [Ohio State] pulled me back and watched some film. I felt good today.”

Davis has 13 scholarship offers to this point and is one of just 12 players in the Class of 2021 that has picked up an offer from the Buckeyes to this point. He took time to talk to Urban Meyer, who he met earlier this year for the first time. He says he’s now getting more familiar with Meyer and what he’s all about.

“I was a big Florida fan, when Urban was actually down there,” Davis told the gathered media on Friday. “It was actually crazy meeting him, I was actually excited to come up here. I know him better now, I know what he wants – not all he wants – but he wants his players to get the NFL, but then he wants them to succeed other than football, to do other things big.

Derrick Davis was one of the most active DBs at Ohio State’s June 8, 2018 camp. (Photo: Birm/Lettermen Row)

The Buckeyes don’t usually recruit a player with three years of high school with that much intensity, but there’s no doubt that they’ve identified Davis as a top priority early. Maybe it’s because he’s from the always-challenging-to-recruit Pittsburgh area. Maybe it’s because they know they’re going to be squaring off against Penn State and James Franklin for three more years. Whatever the case, there’s been no shortage of interest and Davis recognizes it.

“It’s a good vibe,” he said of the Buckeyes attention. “It means a lot to me. It means that they’re really interested in me. I’m not letting it [get to me]. I am just focused on me and trying to get better out here.

“[Ohio State] is a really good school. I like the education, it’s education first. My mom is a teacher, so that’s a big part of it. The football team is real good, the coaching staff and everything. ”

This weekend’s visit also provided a chance for Davis to work alongside new Buckeyes defensive coach Alex Grinch. Grinch was with him for a good portion of the afternoon on Friday, getting in his ear after nearly every rep.

“I like his personality,” he said of the young Buckeyes coach. “He wants me to get better. He was mainly working on my technique, staying low, being patient. I think he’s a really good coach.”

There’s no leader for Davis at this point, but getting back to Ohio State is a priority for him moving forward. There’s a chance he could return this summer.

“Hopefully [I can] come back here this summer, he said. “But definitely I’m coming to a game.”