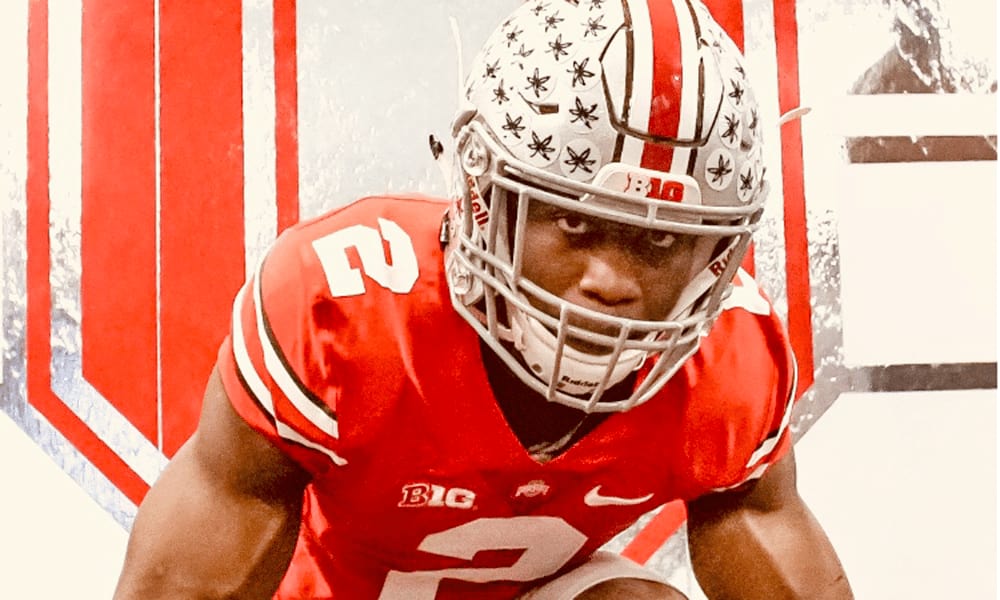 Ohio State’s 2019 recruiting class has a number of talented players that could play a host of different positions when they arrive on campus, including Roswell (Ga.) 4-star athlete Steele Chambers.

Chambers, a linebacker and running back at Blessed Trinity School, says that running back is where he’d like to start his collegiate career.

If that ends up being the case, the 6-foot-2, 215-pound Chambers will be competing directly with Avon, Ind. 4-star standout Sampson James, when they’re both finished with their outstanding prep careers.

With James – and potentially Chambers – already committed, there’s a real sense that Ohio State could be finished at running back in its 2019 class. While I don’t believe that was the original plan, 5-star tailback Devyn Ford, who was seriously considering Ohio State until Chambers’ commitment, recently committed to Penn State and that means there’s no real guy on deck for the Buckeyes.

As the recruiting cycle turns, though, there will be things that change and because of that, let’s take a look at a few of the potential names that are worth knowing if the Buckeyes crank up the chase for another running back.

Months ago – before Buckeyes fans had heard the name Sampson James or Steele Chambers – Noah Cain was the guy most people believed could end up in the Ohio State recruiting class.

Things aren’t always what they seem though and despite multiple visits, the IMG Academy star now appears to have been nothing more than a blip on the radar.

Cain will make a December decision, so there’s time for Ohio State to try and get back into the mix, but Auburn, Oklahoma, Texas, LSU and others are going to make this a difficult battle to regain in traction in. Cain will release his final five schools toward the end of the summer, and has no current plans to make another visit to Ohio State.

A year ago, Kenny McIntosh told me that he almost committed to Ohio State at Friday Night Lights but since then, he and the Buckeyes have not been as closely linked.

The country’s 13th-ranked tailback, McIntosh has laid relatively low on the recruiting front as of late and there appears to be little communication between he and the Buckeyes. Miami, Oklahoma, Florida and Oregon are all involved, so any attempt at reopening the lines of communication would have to take place relatively soon.

Derrian Brown has an Ohio State scholarship offer and is currently uncommitted, and those two factors alone mean he’ll get a spot on this list.

He’s a talented tailback from Buford (Ga.) – an area and high school that Ohio State is very familiar with – and the 5-foot-11, 185-pound 4-star prospect appears to be taking his time in the recruiting process, which helps a team like Ohio State that isn’t in dire need of an addition right now.

Katy (Texas) 4-star running back Deondrick Glass says he talks to Ohio State’s running backs coach Tony Alford regularly and has for months. He also says he’s got plans to visit Columbus during the season, but he’s hinted at that visit for more than a year now. Whether or not it actually happens is eventually going to tell the tale in this recruitment.

With offers from more than 25 schools, Glass has no shortage of options and his experience at Katy – one of the best programs in Texas – makes him an ideal candidate for a big-time, high-pressure program like Ohio State. In three seasons of prep ball, he’s run for almost 4300 yards and is set to have a huge senior season.

Alabama, USC, Michigan, Georgia, and Texas are just a few of the schools that in the Top 10 for this 5-foot-11, 200-pound Glass, so there’s some real competition if Ohio State decides to go all in.

The usual caveat applies here: things can change. There are late bloomers and diamond’s in the rough that have yet to get discovered.

As Ohio State hosts its first one-day camps on Friday, June 8, there are new names that will pop up and make a play for a spot.

If there’s a need for one, and as things stand right now with the Buckeyes and the running back position, it doesn’t appear that there is.

Stay ‘Crootin: Jake Wray hoping to lead the way in Class of 2020
What’s going on with the linebacker position for Ohio State in 2019?