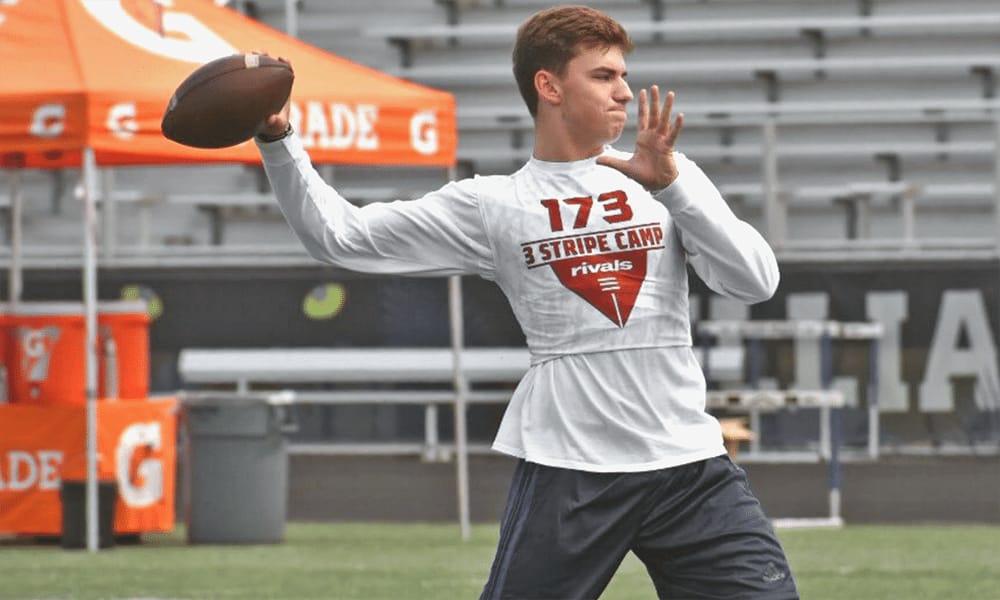 As one of the country’s recruiting juggernauts, there’s an expectation – fair or not – among Buckeyes fans that Ohio State will simply take its pick of the litter every single season, without exception.

There are 120-plus Division 1 programs competing against the Buckeyes for the nation’s top prospects and that means you’re actually going to miss out on more guys that you wanted than you’ll land, generally.

But Ohio State continues to do pretty…pretty good.

With just about six months before the Class of 2019 can begin putting its name on the dotted line, the Buckeyes are still searching for a de facto leader – read: a quarterback – in their recruiting class, however. That’s not an intentional move by the Buckeyes, because they’ve offered 13 different quarterbacks to this point despite it being widely regarded as a subpar quarterback class nationally. The lower quality/quantity thing has played a role. So too did questions about Ohio State’s depth, a question that received some portion of an answer when Joe Burrow announced he was transferring out of the program.

Whatever the case may be, it’s been a challenge finding the right guy to be the guy in 2019. Who will be filling that spot remains a mystery.

Fortunately, I’m here to try and help break down the most likely candidates for such a role.

Let’s examine the top choices, which kicks off with a couple of prospects already committed to Big Ten foes.

For my money, Graham Mertz is the best quarterback in the country not named Bo Nix (Auburn’s 2019 commitment, whose been left off this list because there’s no real shot for Ohio State to land him at this point).

Ohio State hosted Mertz for a one-day visit in April, but the Buckeyes are pushing for him to take an official visit sometime in June. If that visit gets made, things will get very interesting in this pursuit but until then, it seems Mertz is comfortable and happy with his commitment to Wisconsin.

When you talk about upside at the quarterback position, you’re talking about Oak Park (Mich.) High School’s Dwan Mathis, a former Iowa State verbal that is now committed to Michigan State.

Mathis first popped up on the Buckeyes radar in the summer of 2017 when he impressed coaches and bystanders during an Ohio State 1-day camp, though an offer from Ryan Day and company didn’t come until April of  2018, months after he’d already committed to the Spartans.

Ohio State isn’t necessarily waiting on Mertz or any other quarterbacks before kickstarting their efforts with Mathis, either. He’s a guy that the Buckeyes would take today if they had the chance.

Do you see a pattern?

Ryan “Bo” Hilinski – if the Buckeyes are serious about wanting to change their offense to include more of a pro-style passer – is an intriguing option. He’s a legitimate 6-foot-4 and 225-pounds; a prototypical California drop back passer. He’s from California and is committed to the other USC, so he’s willing to travel for the right situation and certainly Ohio State’s program is in better shape than South Carolina’s at present.

Unlike Mertz or Mathis, the bridge that would be burned from a flip isn’t something he’d have to deal with every year in the Big Ten, and that makes the concept of landing him a bit easier.

But first you’ve got to get him on campus which has not happened to this point.

Following his official visit to Ohio State in April, it appeared that the wheels were in motion for Grant Gunnell to commit to the Buckeyes, but over the course of the last seven weeks, there appears to have been steady decline in conversation between the two sides.

Gunnell’s 247Sports.com crystal ball is now beginning to tilt heavily away from Ohio State and toward the Arizona Wildcats, where Kevin Sumlin and Noal Mazzone – who were the coaches at Texas A&M that he’d previously committed to – are now working.

Is it too late for Ohio State to work its way back into the mix for Gunnell? Are they even trying to? Right now, it appears he’s not at the top of the list.

Brian Maurer does not have an offer from Ohio State at this point and is likely a lean to West Virginia, but he’s a quarterback that Ryan Day has had contact with and nice weekend at The Elite 11 Finals – where he earned a spot as one of the Elite 11 – has some fresh buzz around his name nationally.

According to 247Sports, Maurer has “the frame at 6-4 and the arm talent to emerge as one of the elite quarterbacks in this class” and if the Buckeyes were to make a serious push sometime soon, they’d be in a good position make some noise in his recruitment.

The West Port High School star has 14 offers but is about to see interest ramp up from all over the country.

The lone Ohio-based 2019 quarterback on the list, Archbishop Alter (Dayton, Ohio) 3-star prospect Connor Bazelak has been in regular contact with Ryan Day and the Buckeyes for months. He is still waiting for an offer from Ohio State, though, while he mulls over opportunities from 25 other schools, including Georgia, Pitt, Duke, North Carolina, Iowa and a host more.

The Buckeyes have a window open if they want to offer Bazelak, but its not going to be open indefinitely.

This could be a situation where it makes more sense to look for a player at home than to miss him by searching all over for kids that are not much better, if they’re better at all.

There are certainly more names to watch across the country, and as the Buckeyes have to dig deeper to find them, they’ll come to the surface.

For now, these are some of the names to know as Ohio State continues its quarterback search for 2019.