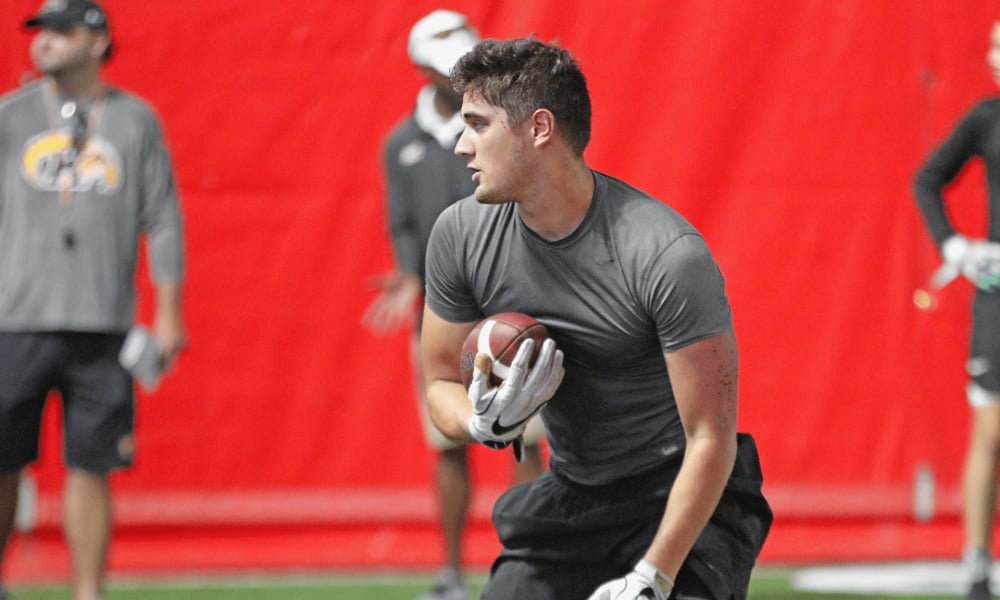 Ohio State signed the country’s top-ranked tight end in the Class of 2018. New York’s Jeremy Ruckert arrived on campus last week ready to start preparing for his freshman season with the Buckeyes.

The roster in Columbus isn’t empty at the position, even without Ruckert. Rashod Berry appears to have taken his opportunity on offense and run with it, and the redshirt junior could be a surprise weapon for Ohio State this season. Luke Farrell and Jake Hausmann were each highly-ranked 4-star prospects in the Class of 2016 and will have opportunities to shine.

Yet, here we are in June and the Buckeyes have offered 13 different tight ends in the class and are still actively researching and evaluating a number of players that they’ve not yet offered. It’s clear that the position is one that Ohio State would like to land in 2019.

Who are the top options to know at this point? Let’s take a look at a few of them.

The country’s top-ranked 2019 tight end is the younger brother of current San Diego Charger and former Arkansas Razorback Hunter Henry. As might be expected, the Hogs are projected as the team to beat in his recruitment. Stanford is also in the mix, but either way, he’s a very long shot for Ohio State.

Ohio State has always recruited Florida well, but Lakeland has not been as kind to the Buckeyes as other schools in the Sunshine State. Can Zipperer change that? I don’t think so. Expect the 6-foot-2, 240-pound tight end to stay close to home with Florida as the most likely destination. He’s not really the body type Ohio State prefers for its tight ends, anyway.

At 6-foot-4 and 215-pounds, Jahleel Billingsley is a bit more what the Buckeyes are looking for in the tight end position — and he’s still developing. He’s a prospect that Kevin Wilson first had interest in over a year ago, but in that time schools like Florida, Penn State and others have leapt ahead of Ohio State. If the Buckeyes are really interested, they’ll need to get him on campus again soon. He last visited in May.

The Buckeyes love recruiting Texas and have recently amped up their efforts with Jaylen Wydermyer, the country’s No. 17-ranked tight end. He’s 6-foot-5 and 230-pounds, which is the prototype body for the Big Ten at tight end. A gifted athlete, he also has offers from Alabama, Georgia, Michigan and others. He told Lettermen Row recently that he’s working to get a visit scheduled to Ohio State but has had trouble getting transportation arranged — always a challenge for kids from areas that aren’t within a four-to-five hour drive of Columbus.

A very new name to the mix for Ohio State is West Virginia’s Brenton Strange. He visited Ohio State on June 4 and is expected to return for a camp date on June 12. He measured in at 6-foot-4 and 210-pounds during his recent visit and the Buckeyes are interested to see how he moves in person. Since his Ohio State trip, Strange has added offers from North Carolina, Cincinnati and Wake Forest, and he’s now becoming a well-known regional target.

If there were a tight end built in a lab, there’s a good chance he’d come out looking like Dayton Dunbar’s Justin Stephens. He’s a true 6-foot-7 and weighs about 240 pounds, but there are a lot of questions about how he translates to college football as he grows out. He has offers from 17 schools, but until he proves he can consistently catch the football, I imagine most of those schools are looking to turn him into another position.

The Buckeyes have been watching Fairfield’s Erick All for a while now, and he’ll get his chance to earn an offer from Ohio State if he shows up for a camp in Columbus. Iowa, Michigan, Wisconsin, Notre Dame and more than 20 others have already offered. What’s holding the Buckeyes back?

Another player that camped with the Buckeyes on Friday, June 8, Foster may have done more good for himself than any of the tight ends in attendance. The 6-foot-6, 235-pound tight end from Pickerington North High School was excellent all day, catching the ball well and running crisp routes. He’s skinny, but he’s got a big-time frame and a chance to be a good college player once he hits a weight room.

As the last week has shown us, there are still plenty of other names that could pop up at any minute. The best way to stay on top of all that recruiting news? Subscribe to Lettermen Row’s Recruiting with Birm newsletter.