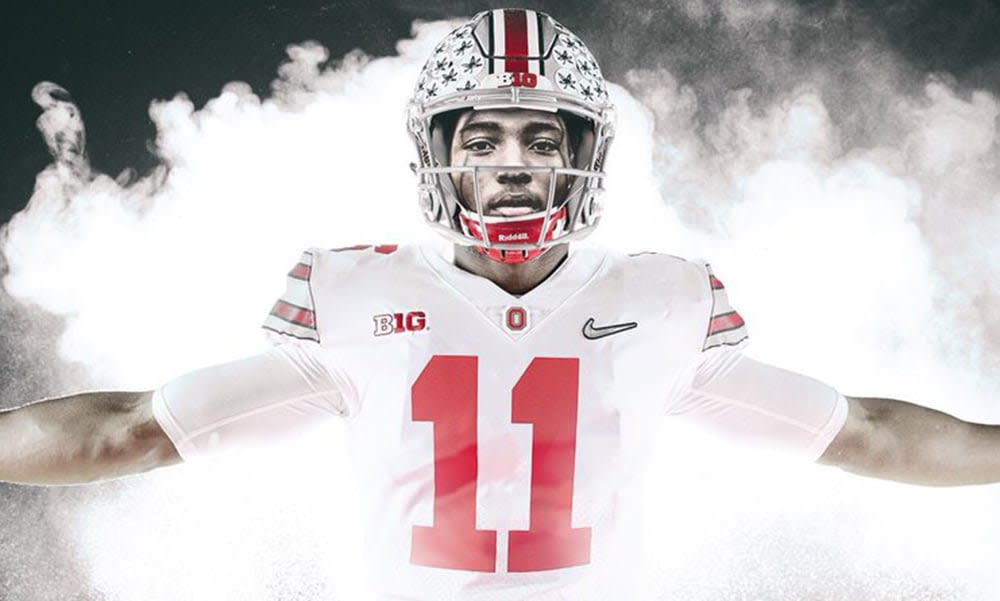 Eight of the country’s top 10-ranked 2019 wide receivers have already made their college decision.

The good news is that one of them has already committed to Ohio State – 5-star prospect Garrett Wilson from Austin, Texas – and is planning to enroll early with the Buckeyes.

The bad news is that Ohio State is looking to sign at least four wide receivers in 2019 and many of the best in the country are already crossed off the list. Of course, as usual, the wide receiver spot is one of the deepest in the country when it comes to the recruiting game, so there’s no shortage of good players out there ready to step up and be a part of Zone Six in Columbus.

As we’ve done with quarterbacks and running backs already this week, let’s examine some of the key names to look for as the Buckeyes search for pass catchers continues.

The Buckeyes have found St. Louis to be quite generous to them of late – they signed two of the city’s best prospects in the Class of 2018 – and the next couple of weeks could prove to be equally fruitful.

Washington, a 6-foot-2, 195-pound wideout at Trinity Catholic, is the country’s ninth-ranked wide receiver and he’s made it no secret that he’s feeling the Buckeyes. He will announce his college decision on August 7 and right now has one official visit planned: to Ohio State the weekend of June 22.

Months ago, it appeared Ohio State was the clear-cut favorite to land another of Indiana’s best prospects but things seemed to decline a bit in the relationship between the Buckeyes and David Bell. That’s no longer the case and he’s become a major target for the Scarlet and Gray.

Bell has a top five that includes the Buckeyes, Penn State, Iowa, Purdue and Indiana but a decision isn’t likely until the season gets underway. He was expected to visit Ohio State on June 16, but a recent family matter has clouded those plans. If he gets to town, there could be some real action, sooner than later.

We’re going back to St. Louis – this time to Cardinal Ritter College Prep School – to talk about 6-foot-2, 160-pound Jameson Williams, another top target at wide receiver for the Buckeyes.

Williams is the nation’s 30th-ranked wideout and Missouri’s third-ranked prospect in the Class of 2019. Ohio State will host him for his official visit the weekend of June 22 as well, and will be hoping to hold off Bama, Oregon, UCLA and more.

Kyle Ford, a 6-foot-2, 200-pound wide receiver from Orange (Ca.) Lutheran starts the portion of the list where things get a bit less clear. He’s an excellent wideout – ranked seventh at the position nationally – but the Buckeyes do not yet have the same kind of relationship with him as they do their top group of receivers (the three above).

Colorado, Michigan, USC, and UCLA are near the top of his list at the moment, but he’s definitely got the attention of Ohio State’s coaching staff.

Penn State will get an official visit the weekend of June 8 and Florida State is probably the team to beat, but Dunmore is a player to keep an eye on if the top three wideouts on the board end up spurning Ohio State.

An interesting prospect making his fifth visit to Columbus on June 8, Lance Wilhoite is the top-ranked prospect in Tennessee according to the 247Sports.com composite rankings.

The Buckeyes have made Tennessee a recruiting priority in the last few class cycles and Wilhoite’s eventual decision could impact a few other targets, so it’s interesting to watch what he does following this fifth trip to Columbus.

When Garrett Wilson made his college announcement and picked Ohio State, he took to Twitter shortly after and announced that he had every intention of bringing some more Texas talent to Columbus with him.

Elijah Higgins, another Austin product, is certainly one of those players he’d like to bring along. Higgins is a true outside wide receiver at 6-foot-3 and 215 pounds and that’s a spot Ohio State would love to add in 2019. He’ll visit Columbus officially – and for the second time since April – on June 22.

Though he’s likely a defensive back in college, Griffin (Ga.) Spalding High School two-way star Zion Puckett definitely has the Buckeyes attention and has the skills to play offense or defense in college.

I’ve included him here only because he’s listed as a wide receiver on the 247Sports.com composite rankings.

The talk out of Georgia is that Puckett is sincere about Ohio State but the Buckeyes have a host of major programs to fend off if they want to land him. Academics are a major priority in his decision, according to folks I’ve talked to in the Peach State.

How Robinson sees Ohio State is something that will become a bit more clear when he visits the Buckeyes on June 14. One thing that is certain: Robinson is an explosive offensive threat. In three seasons at Western Hills High School he’s accounted for 71 touchdowns and nearly 6000 all-purpose yards.

If there’s an Ohio prospect that could get worked into the conversation for Ohio State, it’s Solon’s Trevon Raphael.

Raphael is 6-foot-4 and 190-pounds, and again – like Higgins – is a true outside guy making his talents a little more unique than most. He has nine current offers, including West Virginia, Maryland, Missouri and Iowa State, but he’s in no hurry to make a college decision, which is always a good thing for the Buckeyes when it comes to in-state talent.

This is a very raw but potentially special talent who has only played one year of high school football. He’s a 10.8 guy in the 100-meter dash and that kind of speed, at 6-foot-4, is rare. Keep an eye on him.

The last player on this list is another guy that doesn’t currently have an Ohio State offer, but has been in fairly regular contact with Ohio State recently. Tae Crumes, a former Louisville Cardinals commitment, will visit the Buckeyes in June. He’s a burner at 6-foot-1 and 165 pounds at Louisville’s Butler Traditional High School and he’s still relatively green when it comes to the recruiting game, having only visited Louisville and Kentucky to this point.

That’s going to change this summer and if he can come to Ohio State and impress Urban Meyer, he’s a guy that could find himself really involved in the mix.

There are dozens of other potential names at wide receiver, so you’ll forgive me if I’ve not listed them all, but these are the prospects most involved with the Buckeyes at the moment. June camp season has a way of revealing new stars though, and the search for those players begins in earnest on Friday in Columbus.