Connect with us
Ohio State commit Clark Phillips is counting down to his arrival with the Buckeyes. (Birm/Lettermen Row)

LA HABRA, Calif. — Frank Mazzotta popped the practice film in to evaluate the offense, but his attention immediately was drawn to the scout-team defense.

The decorated, longtime coach at La Habra in sunny Southern California had always preached the importance of getting as many reps as possible on the practice field, pushing the Highlanders to find any way they could to contribute, improving both themselves and the team at the same time. And yet, it was still a surprise when he saw Clark Phillips III patrolling the secondary on tape, giving the offense just about the most difficult scout-team look imaginable at that level.

That’s both the challenge and the benefit of coaching the tireless, four-star cornerback: The Ohio State commit never wants to leave the field.

“That’s him, he never wants to not be playing,” Mazzotta told Lettermen Row. “The guy loves football. And his bar for himself is way higher than somebody else could set. He’s just an intense trainer. There’s football, then there’s what he does extra.

“You go to practice, and how do you know he loves football? He doesn’t want to come off, everything is a competition. We record every practice, and I’m coordinating the offense and looking through it — and on scout defense, Clark is out there. That’s him, he never wants to not be playing. He takes it to another level, he takes the effort to the extreme.”

It’s not just on the field where all that work pays off for Phillips. And before he could chat about his rise for the Highlanders during a visit from Lettermen Row last week, he first needed a few minutes to talk with a teacher about how he could go from “good to great” in an academic mock-trial competition. It’s also the same kind of energy he’s taking to his classwork so he can graduate early and get on campus with the Buckeyes in January.

It’s clear that Phillips isn’t just a football player, and he’s certainly well-rounded in his interests. But it’s no secret that his off-the-charts athleticism, intense drive and a knack for tackling that accidentally showed up early in his life has always been leading to the kind of opportunity that awaits at Ohio State.

“When I was about 7 years old, I started out and my first sport was actually soccer,” Phillips said. “My dad took me out there to try out and play, and then the first game comes around, he said the first thing I did in my first game was tackle a kid. The kid is crying, the mom is screaming. I ended up not playing in that game, so my dad was like: Now your sport is football.

There’s been no slowing Phillips down ever since, and La Habra doesn’t even bother trying to rein him in at this point.

If Phillips wants to play offense and help the team more, so be it. And, no surprise, his attention to detail and work there was so impressive that Alabama offered him a scholarship as a wide receiver.

Scout team? Every rep on defense in a game? Whatever La Habra needs now or Ohio State needs in the future as it faces the possibility of completely rebuilding the secondary next year, Phillips will do it. 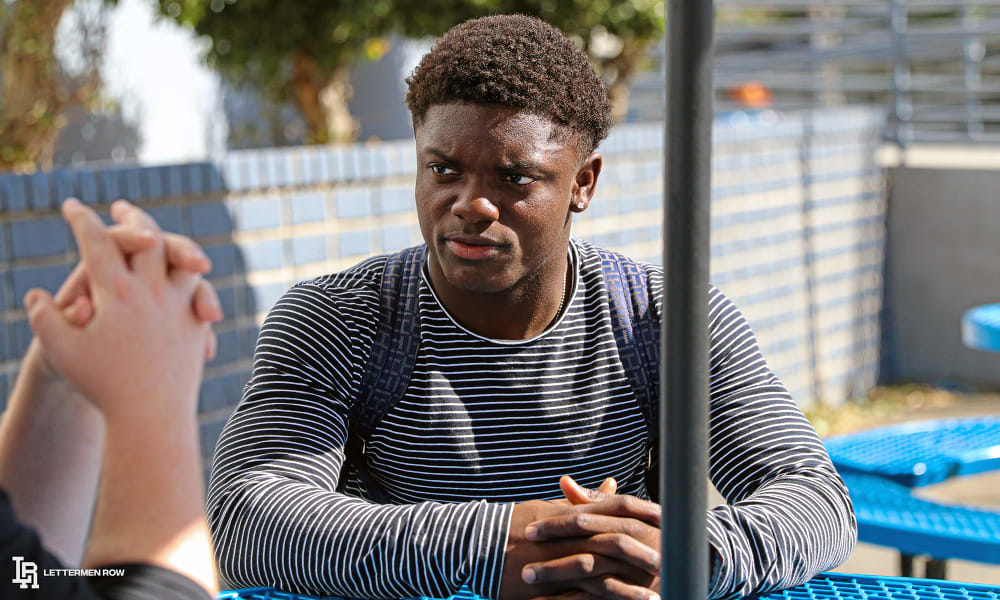 Ohio State commit Clark Phillips is doing as much work as possible to prepare for his early enrollment. (Birm/Lettermen Row)

“I’m super passionate about it,” Phillips said. “I want to do something great, dominate any kind of competition and just do something special. I tried to dominate as the defense attorney [in the mock trial], and anything I can compete at, I’m going to do it. That’s kind of what stood out to me when I was on campus at Ohio State, because that’s the way the guys there and the coaching staff go about their business.

For now, though, Phillips still has work to do at La Habra.

And even when he’s done with the basic requirements, odds are he’ll find a few extra jobs to do just to keep making himself better.

“Clark Phillips isn’t going to do anything halfway,” Mazzotta said. “If he says he’s going to help the team on offense, he’s going to be the best damn receiver there is. The athletic part, I mean, he’s off the charts. He’s fast, extremely explosive — but there are other kids like that, right? Ohio State gets kids like that a lot, but I think they also get the next-level guy like him.

“That’s my favorite thing about him. He’s singularly focused on accomplishing what he wants to do.”

That certainly bodes well for Clark Phillips and his future at Ohio State.

But for now, that’s still making life difficult for the La Habra offense against the best scout-team cornerback in the nation.