Connect with us
Rancho Cucamonga quarterback C.J. Stroud has the attention of Ohio State. (Birm/Lettermen Row)

RANCHO CUCAMONGA, Calif. — The reminder of the turning point in the life of C.J. Stroud is right there on his T-shirt as he walks out onto the field for a league championship walk-through workout.

Stroud gets loose, stretching his long arms before any of his teammates at Rancho Cucamonga arrive for practice with Mount Baldy looking down on the Cougars. Stroud starts off by firing a series of short throws, each one with pinpoint accuracy right into the chest of his receiver before casually uncorking perfect 45-yard spirals by the end of the session.

All the while, the shiny, gold Elite 11 logo on his chest leaves no doubt that anybody looking for the fastest-rising quarterback prospect in the country has come to the right place.

“I definitely was thinking going into that week that it was a great opportunity for me to put my name out there,” Stroud told Lettermen Row on a sunny afternoon in Southern California. “But I really just came with the attitude that I wanted to be myself and see where it goes from there.

“I definitely knew going in that I could compete with anybody. But I needed that assurance, that stamp on it that I can play with anybody in the country. I feel like that solidified it.” 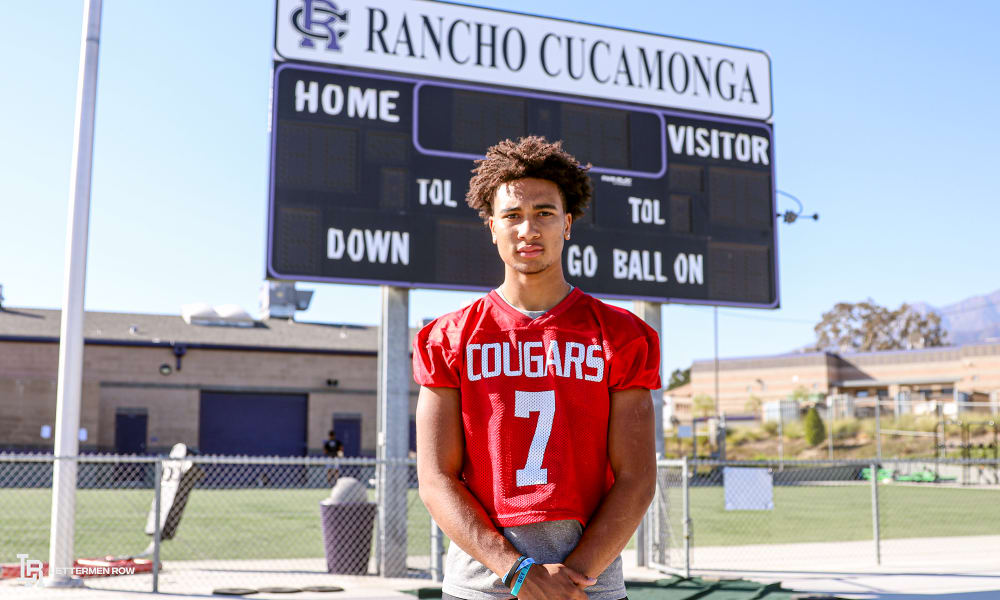 Stroud arrived at The Opening Finals in Texas over the summer brimming with confidence, but he was only considered a three-star prospect and was primarily drawing recruiting interest close to home. But he left as the event’s MVP at quarterback after opening eyes with his ability to make any throw, a knack for reading defenses and rave reviews from five-star receivers like Ohio State commits Julian Fleming and Gee Scott.

By the time Stroud was back in the Golden State, his life had completely changed — even if the way he played the position had been the same for years. Finally, the rest of the nation was catching on to what he had always believed about himself, including when he was sitting on the bench as a freshman and sophomore for Rancho Cucamonga.

“Football wise, I don’t feel like anything has really changed,” Stroud said, “Of course, there’s more ‘fame’ and all that stuff. But on the football field, I’ve been doing the same thing since I was a freshman. Social-wise, it’s been ridiculous. There’s people messaging me and telling me they look up to me, and that’s definitely a blessing. But there’s been a whole transition in my life, like a 360-degree turn — which is what I’ve been hoping for my whole life. It finally just cracked.

“There was just this higher stage that I was preparing for that I didn’t even know about. I kind of always knew that I was going to ball out, but I didn’t know that I would be throwing to Gee Scott and Julian Fleming — like, that was just crazy to me. These dudes are five stars who seemed like seven stars to me, and they were treating me like a five star even though I was only a three. I was like: This is cool, I can live this life.”

Now the big question for Stroud is where exactly he wants to live it in college, because his coast-to-coast options include basically every powerhouse program in the country. The Buckeyes are squarely in that mix, which then begs another question: Does he want to compete with another passer in the recruiting class?

Stroud isn’t revealing all that much about his favorites at this point, though Jack Miller having already committed to Ohio State doesn’t appear to be a deal-breaker for a guy who openly embraces competition and just proved himself over the summer as one of the best prospects in the Class of 2020. He’s already visited Ohio State unofficially this season, and Ryan Day is expected to welcome him back for an official that will most likely be in December to allow Stroud a better opportunity to sit with the staff and evaluate the program outside of the game-day circus.

But he’s also got big-time schools like Georgia, Oregon, USC and Michigan vying for his final trips before making his decision as he works to graduate in December and potentially enroll early to get his career started at the next level. And that’s been a bit of a juggling act as he keeps trying to win games with the Cougars while dealing with the onslaught of attention over the last couple months. 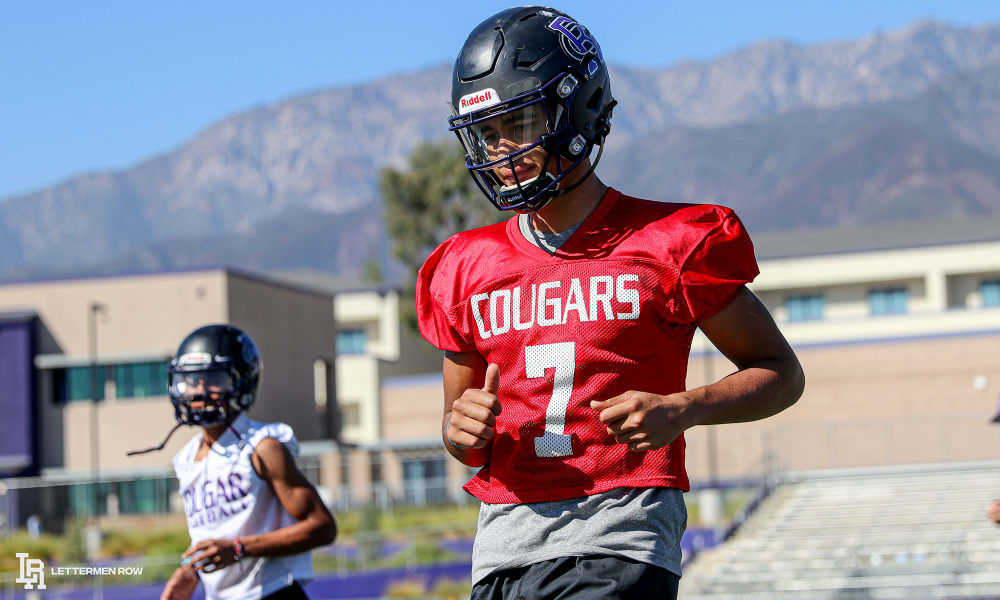 “He’s not much different now, he just didn’t have that national exposure before,” Rancho Cucamonga coach Mark Verti said. “He just had a wider audience. The schools that offered before the Elite 11 were probably unhappy with how he did over there, because now there’s a lot more schools interested.

“I think sometimes he seems overwhelmed or maybe drained from all the stuff, and I think that’s why he’s tried to put a lot of recruiting off until the end of the season. He’s taking a lot of classes right now to be able to graduate in December, and then keeping his normal load up. With a league championship coming up and then the playoffs and then recruiting, he just has a lot going on.”

Figuring out how to balance it all required an adjustment period, and Stroud really had no choice but to do it on the fly.

But even with everything swirling around him and a huge decision creeping up on him, Stroud’s mindset remains as unchanged as his playing style. All he wants to do is be prepared for the next opportunity to prove himself, which is exactly how the spotlight found him in the first place.

“What if The Opening didn’t happen? That’s a great question, and honestly I don’t have a certain answer,” Stroud said. “I’d probably be staying close to home, maybe somewhere in the Pac-12. But I feel like my senior season would have been the same no matter what. I would have been proving myself. I feel like schools would have reached out, but I don’t know if it would have been to this extent. I think my senior year, though, is showing people that I can actually really play football.

“When I was going [to compete] this summer as a three star, I was happy with that. I was like: I’m going to show people why I’m this good, because the rest isn’t up to me to decide. All I can do is control what I can control. I can’t control what a reporter thinks about me unless I’ve talked to them in person. But I can control what happens on the field, so I wanted to show everybody that I’m the best quarterback in the country.”

C.J. Stroud strengthened that case over the summer. And he’s got the T-shirt to prove it.