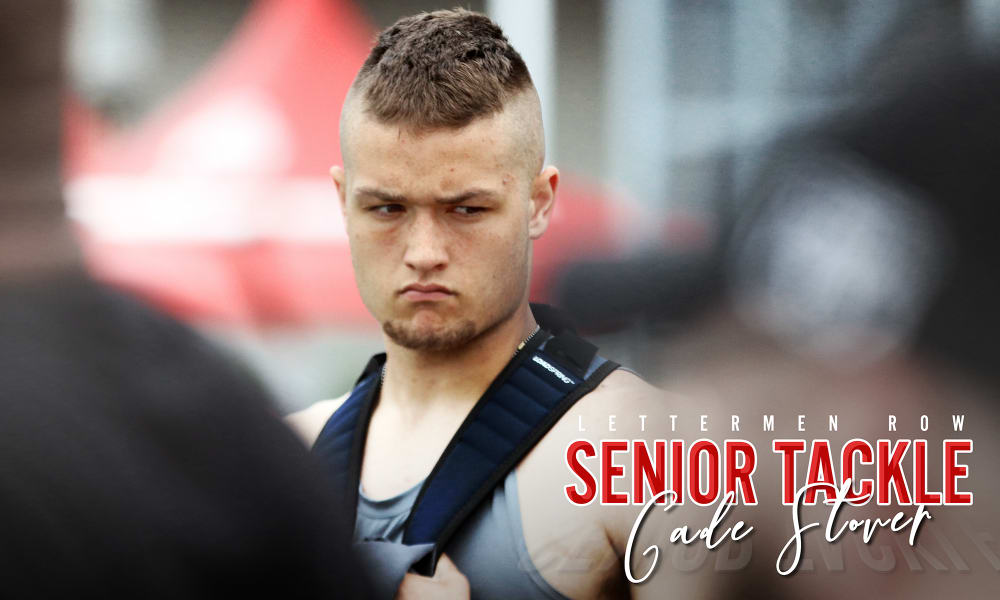 Ohio State commitment Cade Stover is set to embark on his final season of high school football and basketball at Lexington (Ohio) High School. Lexington, a small town of just about 4,700 people near Mansfield, is a farm community that’s played an instrumental role in raising Stover, the country’s eighth-ranked outside linebacker. He committed to the Buckeyes in late April this year, picking Ohio State over Penn State, Notre Dame and 20 other schools. The 6-foot-4, 230-pound athlete is on the verge of becoming his school’s all-time leading scorer in basketball, and he will share all of the ups and downs of his senior year with Lettermen Row in this weekly journal.

The football season continues to fly by.

I can’t believe we are already to Week Five of my senior year. It seems like just yesterday I was a freshman, nervous as ever, waiting to start my first game. This week we got our first win of the year and did it in convincing fashion, beating Mount Vernon 38-0.

Throughout the last week of practice, you could feel the energy. You saw the results Friday night. It’s great when the hard work results in a win, because after all of us feeling that and knowing what it takes, this week has been filled with the same energy and effort. That’s a positive sign for our team and the future of our program. I think that only winning the lottery could feel better than getting that first win out of the way.

Still, there is a lot of work to be done to get where we want to be approaching the halfway point in the season. We are looking to make a run at the second half of our schedule, and that starts with Wooster this week.

The Ohio State game against TCU, in my opinion, was one of the most entertaining games of football I have watched in a long time. Both teams played so fast and so hard, you couldn’t move away from the TV. I actually watched the game at one of my teammate’s house with the whole Lexington football team and what seemed to be most of Richland County.

It’s wild to be around all these adults and little kids decked out in Ohio State gear, cheering so loud at the television. It was fun being in that atmosphere and realizing how much Buckeyes football means to all these people and the rest of the state. It makes me that much more excited and proud to come from the little town of Lexington knowing that in the near future I’ll be on TV showing out for my hometown and all the great Buckeyes fans around the country. I’ve said it before, but man, it’s a dream.

Despite the big party for the game, we didn’t do anything too crazy the rest of the weekend.

We finished picking and canning the last of the tomatoes for making spaghetti sauce, a Stover family tradition for many years now. For all of the people out there reading this, homemade spaghetti sauce will forever change your outlook on any dish of spaghetti you have ever eaten. I promise.

Aside from that, on Sunday my dad and I spent half the day hauling manure. You guessed it, that’s not really glamorous. He loads the spreader with the skid loader, while I am in the tractor spreading it on the fields, so at least my job is a bit easier than his.

My favorite part of the weekend was after we finished hauling, we decided to go cut and split some wood. This is something my dad and I absolutely love doing. Even though he doesn’t let me run the chainsaw much, I make up for it splitting the wood. We pull our old flatbed truck down by the tree. Dad cuts, I pick up and throw the logs on the back of the truck. Once the truck is full we drive it back up to the barn. That’s where then we get the maul out and where the fun begins.

We don’t have an automatic-log splitter. Dad and I set up all the wood and start swinging, making fun of whoever doesn’t cut clean through on the first swing. Only downfall to the process is the horrible blood blister you get in your hands after you are done, but it’s worth it just to spend that time getting work done with my dad.

I don’t know yet if I’m coming to Ohio State on Saturday, I’m still trying to get things straight with my schedule. If I do, I’ll see you there.

Thanks for reading Buckeyes fans. O-H!