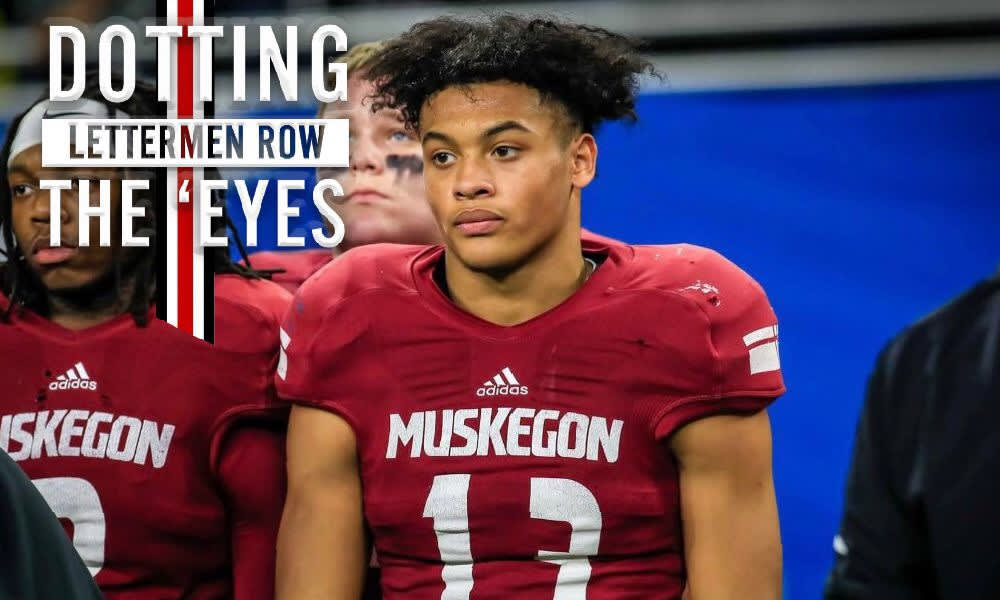 Stay in touch or be left out because Ohio State recruiting is a 24-hour, seven-day-per-week obsession. What’s the latest news as the Buckeyes build for the future? Get that and more Sunday through Thursday on Lettermen Row. Today we talk about the Buckeyes pursuit of Cameron Martinez, Darrion Henry’s top schools list and reaction from Rylie Mills about his official visit to Ohio State.

Ohio State co-defensive coordinator Jeff Hafley was in Western Michigan on Monday in the small town of Muskegon, where he saw 3-star athlete Cameron Martinez. Hafley spent a couple of hours at Muskegon High School, time spent with a handful of folks close to the talented multisport star.

“He was there for a while,” Martinez told Lettermen Row. “Everybody that met him today loved him. He talked to all my coaches and caught up with my stepdad again. He watched me lift and run track at practice as well.”

Hafley wants Martinez to play in the secondary for the Buckeyes. But his visit came just a day after Martinez had an extended conversation with receivers coach Brian Hartline about Ohio State’s NFL Draft weekend, highlighting program’s success putting receivers in the league. Hartline wants Martinez, who plays more on the offensive side of the ball in high school, catching passes as part of Zone 6 if he picks the Buckeyes over an expanding list of school choices.

That conversation with Hartline followed a series of talks with Ryan Day last week that were centered on continuing to grow his overall comfort with the Buckeyes and setting up his official visit, which is likely to be set for the weekend of June 21.

The point? Ohio State is all in on Cameron Martinez. Clearly it wants the 5-foot-11, 175-pound prospect to know it. Martinez is a priority target for the Buckeyes, and it doesn’t matter what position he suits up for in Columbus — the desire to add him to the Class of 2020 is high.

Though his official visit isn’t yet set in stone, Martinez knows he will visit a couple of schools in May before what’s likely to be a busy June on the official visit front.

“Penn State is the last weekend of May,” Martinez said. “And Kentucky may be in the middle of May. I’ll probably visit Louisville when I go to Kentucky as well.”

It shouldn’t be a surprise that Ohio State is on the list. The Buckeyes have recruited Henry harder than any other program and have recruited him as aggressively as any other player in the Class of 2020 for quite some time now. Henry visited the Buckeyes twice this spring, including for the spring game — but also spending the final weekend of March in Columbus as well.

“At Ohio State, the atmosphere there is always great,” Henry told Lettermen Row. “Also the connection with the coaches stays consistent. Ohio State is in a good spot with my recruitment.”

There was some belief that Henry’s recruitment would be finished by now. But a busy spring that saw visits to every school on the remaining list has left things up in the air with the 6-foot-5, 260-pound Henry and his ultimate timeline.

What is known is that five schools on his list could get official visits, and a couple of them are likely to happen in June. Ohio State, if it were to get an official visit, may not have that happen until the 2019 season is underway. As it stands today, the Buckeyes remain the prohibitive favorite. But it would be unwise to discount any of the SEC programs involved here, especially LSU, who is hoping to pull Henry and his Cincinnati Princeton teammate Jaheim Thomas as a means to help flip Buckeyes commit Paris Johnson.

Final two for Mekhail Sherman and no real intrigue

Last week we wrote about how important the official visit for 5-star linebacker Mekhail Sherman could be for Ohio State as it looked to fill out the defensive side of its 2020 recruiting class.

“Now with a visit coming to Ohio State,” last Tuesday’s Dotting the ‘Eyes said. “One has to wonder if there’s been an adjustment to his plans of a December announcement and if his original timeline of a summer commitment is coming back into play.”

It may be sooner than the summer. Sherman, the country’s second-ranked outside linebacker, announced today he’d be making a college decision between two schools and forgoing other planned official visits.

It’s between Ohio State & Georgia fr. No interviews, & I appreciate the coaches for presenting me opportunities & the fan bases which came with them. Appreciate you all💞

Before you get too caught up in what had the potential to be an epic battle between two of college football’s best programs, let me point you to this past Sunday’s edition of Dotting the ‘Eyes.

“Sometimes things change in recruiting and despite how close Sherman was to being a Buckeye months ago, it really doesn’t seem that’s going to happen from here. Expect the Ohio State staff to ramp up the recruiting efforts on other prospects from here.”

This one is going to end with Sherman committing to Georgia.

“I got there Friday night,” Mills told Lettermen Row. “I knew it was going to be impressive going in [to the visit]. I thought the coaches did a really good job presenting the football and academic sides of the school.”

Since he’d made a pair of trips to Columbus already, Mills was familiar with much of what Ohio State is about, so this visit was more about how he’d fit into the program from a peer-to-peer standpoint.

“The biggest piece was being with the players,” he said. “Also, seeing what life after football was like and what opportunities there were for players.

“They answered those questions really well. I thought they showed me a lot of what their Real Life Wednesday [program] has to offer and what their players do after college.”

What happens from here is that Mills, 6-foot-5 and 275-pounds, likely goes into decision mode. The Buckeyes appear to be fighting solely against Notre Dame for his commitment, and at this point, there’s not a lot of confidence he’ll end up anywhere other than South Bend whenever a decision is made.