Paris Johnson and Darrion Henry will both be back at Ohio State for the spring game. (Birm/Lettermen Row)

The Ohio State spring-game weekend is here, and that means another major recruiting opportunity for Ryan Day and his freshly assembled coaching staff.

Day’s recruiting efforts to this point have been centered on bringing in smaller groups of players and families in an effort to maximize relationship-building opportunities. And though there will be a dozens of players making their way to Ohio Stadium on Saturday morning, the goal remains the same: Find quality time with the top prospects and continue growing bonds between those players and the newly minted Ohio State coaches.

When it comes to a weekend like this, there are sure to be a handful of key storylines developing on the recruiting front. Here are the biggest ones that the Lettermen Row crew will be watching.

Pair of kings from the Queen City

There’s no real way to know every single player coming to town this weekend, but we do know that 5-star Ohio State commitment Paris Johnson and 4-star defensive lineman Darrion Henry will return to Columbus for the second time in two weeks and spend the day at Ohio Stadium.

For the Buckeyes, it’s another chance to reinforce to Johnson why he chose Ohio State 10 months ago and for his family to understand why being committed to Day’s program will always draw the real love that recruits are looking for.

Getting this pair on campus and potentially in the Class of 2020 is going to be one of Ryan Day’s defining moments in his rookie year. Any opportunity to connect with them is huge.

For what it’s worth, Jaheim Thomas will not be with Johnson and Henry. He’ll be taking the ACT. 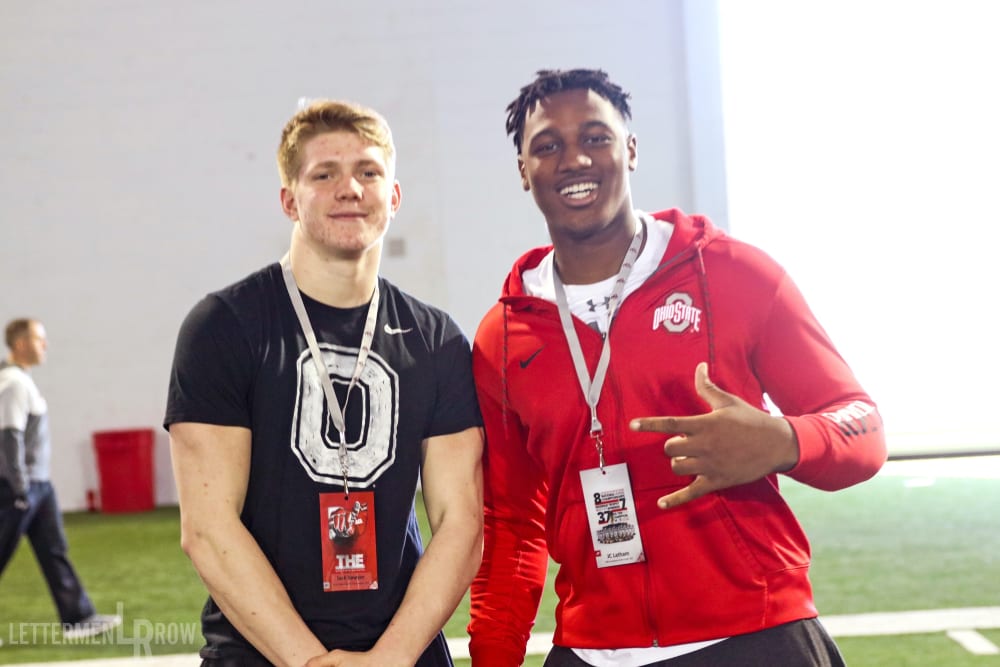 Ohio State commit Jack Sawyer (left) is trying to lead the way for others in 2021. (Birm/Lettermen Row)

The lone 2021 commitment for the Buckeyes will no doubt be paired up with a host of big-time prospects on Saturday, including Solon defensive end Najee Story, Philadelphia stars Kyle McCord and Marvin Harrison, Jr. and Texas standout offensive lineman Donovan Jackson. Maryland 5-star offensive lineman Landon Tengwall is also expected to visit for the first time.

Each of those players holds an Ohio State offer already, and each will be in town getting to know the coaching staff and getting to know Sawyer. One of the many reasons Sawyer’s decision coming so early was vital for Ohio State was the opportunity for him to be in town every time he needs to be for weekend’s just like this one.

The biggest names want to play alongside the biggest names, and they don’t get much bigger than the country’s No. 2-ranked player. Sawyer will be a draw at Ohio State this weekend.

Major Buckeyes targets Ben Christman and Lorenzo Styles are not expected at the spring game because of track and field obligations.

Will Jack Miller emerge as vocal leader of 2020 Class?

There are an awful lot of things to like about Ohio State 2020 commitment Jack Miller, but forced to choose one thing to dislike, it’d have to be the fact that he lives 2,000 miles away from campus — which understandably keeps him away from Columbus for most of the year.

When Miller has been on campus over the course of the last two years, he’s made a number of real connections with his peers and proven to be a force on the recruiting trail for the Buckeyes. This weekend when he returns to Ohio State, he’ll have a chance to play that role once again.

Outside of the aforementioned Johnson and Henry, Miller — along with fellow commits Jaxon Smith-Njigba, Jakob James and Trey Leroux — will get his first chance to work on a top running back target. Lawrance Toafili arrived in town on Thursday. Toafili has never visited a program outside of Florida and if there’s a guy who could illustrate why heading to Ohio for college could be the move, it’d be Miller.

The Arizona 4-star quarterback connects well with other players, and there’s nothing more important to a recruiting class than a vocal, talented quarterback leading the way. He’s done as much as he can from across the country, but this weekend gives him a chance to take the bull by the proverbial horns and provides Miller and the three offensive line commits in attendance to push for Pennsylvania 4-star Michael Carmody. 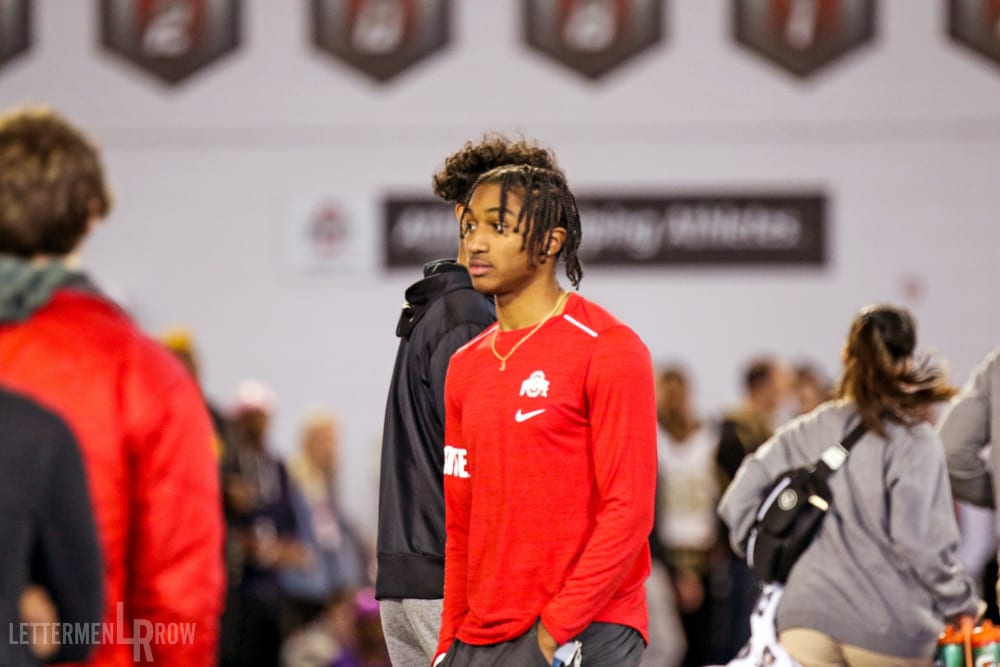 Lejond Cavazos could be the newest commit for Ohio State this weekend. (Birm/Lettermen Row)

Which Ohio State targets could be on Commit Watch?

I never like to go too far onto the edge when trying to predict what could happen on a weekend like this one, because each player in town has their own timeline, agenda and schedule. But I know it’s part of the job to try to give readers my opinion on who could realistically pop for the Buckeyes this weekend.

First up is the Friday commitment of Lejond Cavazos. We know he’s making an announcement on Friday night, and my belief is that he will choose Ohio State. He will instantly pick up the role of class recruiter for the Buckeyes, and he will be good at it.

Beyond that 4-star cornerback, there are no planned announcements by any Ohio State target — but that doesn’t mean there’s no chance for fireworks.

Dublin Coffman 4-star athlete Mike Drennen will be at the spring game, and though he told Lettermen Row that Ohio State leads in his recruitment just about two weeks ago, he’s also stated that he wants to push his recruitment through the summer. The Buckeyes aren’t going to have spots open forever, and I wonder if that message will be conveyed to Drennen this weekend in an attempt to impress upon him the need for more urgency toward a decision.

If Ohio State’s coaching staff has come to an agreement, Kyle McCord’s situation could become interesting quickly. He and Marvin Harrison, Jr. arrived in Columbus on Thursday, and these three-day trips aren’t being made without some intention. It’s early to accept a 2021 quarterback, but the 6-foot-3, 195-pound McCord is just beginning to scratch the surface on his abilities. If there’s the chance his commitment brings one from Harrison, I think Ohio State would have a tough time saying no.

Najee Story is going to commit to Ohio State at some point if the program continues to recruit him the way it has, and that decision could come at any time. Why not this weekend?