Connect with us
Brenan Vernon has 11 early offers but a lot more are coming whenever he gets back onto the field full-time. (Brenan Vernon/Hudl)

Ohio State football recruiting can be a wild ride full of twists and turns as recruits from all over the country maneuver their way to signing day. Lettermen Row is here to help navigate the tumultuous roads by getting to the heart of the matter with the young football players and Ohio State coaches and staff members themselves. Today’s guest is 2023 defensive end Brenan Vernon, the only sophomore in Ohio with an Ohio State offer at this point.

The lone Ohio prospect with a Buckeyes offer in 2023, Vernon is an early favorite to be a 5-star prospect in the 2023 class. His first run of scholarship offers, which includes Notre Dame, Michigan, Tennessee, Michigan State, Indiana and others, is a pretty good sign that right now, likely because his injury slowed down his sophomore year, he’s more of a regional name than a national name but that’s going to change when football returns in all its various forms throughout the spring and summer.

Assuming it does of course. 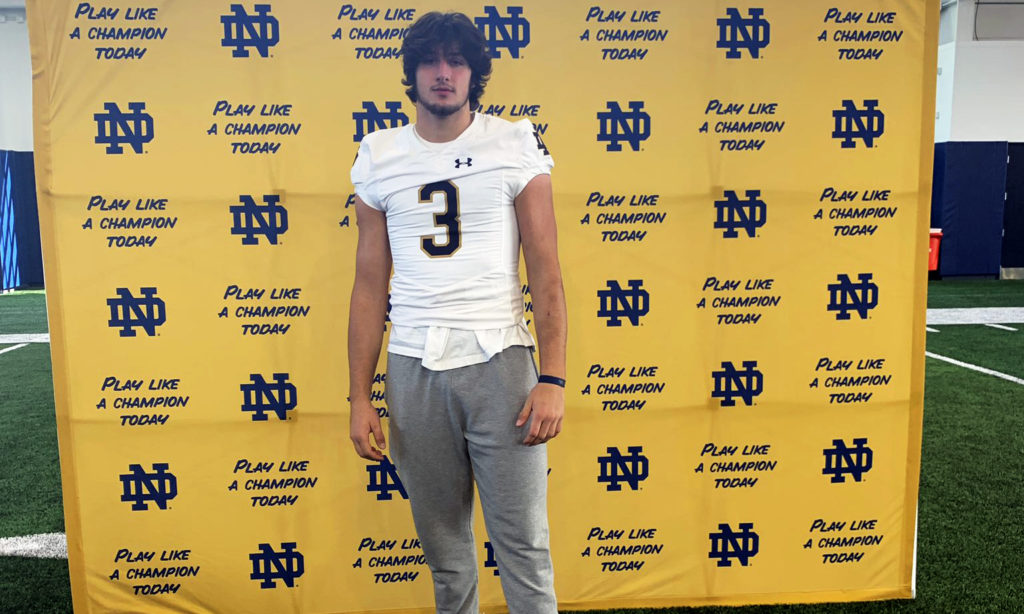 Brenan Vernon is going to be a top-ranked prospect in the Class of 2023 and is excited to get back to college visits. (Brenan Vernon/Twitter)

One such assumption? That Brenan Vernon is going to be following the lead of recent top-ranked Ohio prospects like Paris Johnson and Jack Sawyer, 5-star players who picked the Buckeyes early with the idea of growing a recruiting class around him. Yes, Vernon likes Ohio State and grew up watching the Buckeyes, but he’s intending to take all the time he needs before making a college decision.

The Buckeyes have limited contact opportunities with Vernon and anyone else in the Class of 2023 at this point but are no doubt hoping that things do return to normal so that Larry Johnson and Ryan Day get in-person meetings with him to know him better. Tim Hinton is the Ohio State staff member who spends the most time talking to Vernon now.

What schools is Brenan Vernon hoping to hear from the most moving forward? What is the first place he’ll visit when the recruiting dead period opens? How does he hope his recruiting process unfolds from here? Ohio’s top-ranked sophomore joined Birminology to talk recruiting, football and more with Lettermen Row.

Continue Reading
You may also like...
Related Topics:Featured, brenan vernon