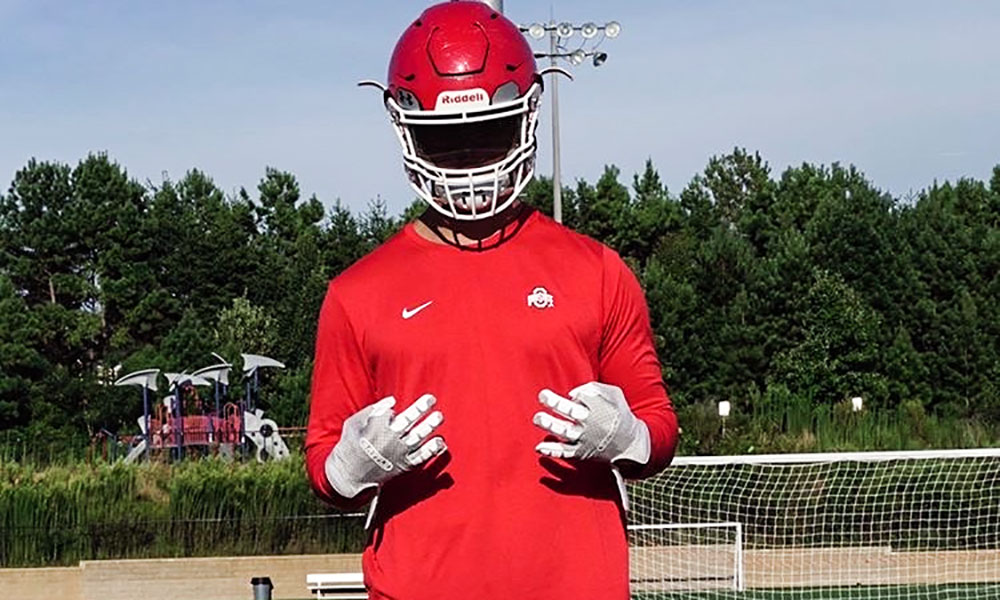 COLUMBUS — On Tuesday night, Ohio State picked up commitment No. 6 in the Class of 2022 when Bennett Christian ended his recruitment and selected the Buckeyes.

A Tennessee legacy, Christian visited Columbus in mid-August, hoping to get a better glimpse of the city and the Ohio State campus, despite being unable to spend any time with coaching staff while in town. That visit was enough to give the Allatoona (Acworth, Ga.) High School prospect the all-important “at-home” feeling he was looking for and ultimately led to the decision to pick the Buckeyes.

Lettermen Row is analyzing the decision by Bennett Christian, what his commitment means to the Buckeyes, the Big Ten conference and the national recruiting board in the Class of 2022.

If there’s an Ohio State comparison to be made for Christian, it’s probably Jake Hausmann, whose big-body made him a matchup nightmare in high school. That’s a similar problem for defenses trying to defend Bennett Christian.

At 6-foot-6 and almost 235-pounds, Christian isn’t afraid to mix it up in the run game as an aggressive blocker — something that Ohio State always requires of its tight ends. But he’s more than capable of stretching the field in the passing game when his offense requires it of him.

“On the field Bennett brings the uncommon mix of skill, an ability to get open and natural ability to catch along with his desire to play very physical at the line of scrimmage.” Gary Varner, the coach at Allatoona told Lettermen Row this week. “Combine all of that with his size and you get a big-time recruit.”

That’s why Ohio State went all in on recruiting Bennett Christian. And it’s why he’s now a Buckeyes commitment despite playing just 15 games of varsity football. Getting back on the field this fall should allow him to take the next steps in his development according to Varner.

“I think that his game awareness will be his next area of improvement,” Varner said. “It will be much different this year  compared to a [being a] sophomore starter with no varsity game experience. The game should be much slower for him this year.”

The country’s No. 19-ranked tight end, Christian has offers from 12 schools at this point and has flown a bit under the radar because his high school doesn’t employ a high-octane passing offense. Penn State and Tennessee were the other two programs that made his final three schools. But his ultimate choice came down to the Buckeyes and Volunteers, the program his father played for in college. He also held scholarship opportunities from Michigan State, Nebraska, Pitt, Georgia Tech and Kentucky, among others.

Ohio State is hoping to land a pair of tight ends in the Class of 2022, so adding a commitment from Christian this early allows Kevin Wilson and the Buckeyes to turn the focus toward his complement. That list appears to start with North Carolina star Benji Gosnell, but it has a number of potential options that could make their way into the fold as the fall season unfurls and recruiting makes an expected return to normal.

Bennett Christian is the sixth commitment in 2022 for Ohio State and first player who isn’t from Ohio to join the program in this cycle. Dasan McCullough lives in Kansas but was born and raised in Cincinnati. Christian joins Lakota West (West Chester) 4-star offensive tackle Tegra Tshabola on the offensive side of the ball for 2022.

Ohio State remains firmly entrenched as the country’s No. 2-ranked 2022 recruiting class, trailing only defending national champion LSU, which has one more recruit committed than the Buckeyes in this cycle. Christian is the lowest-ranked member of Ohio State’s class, but his national ranking doesn’t reflect the way he’s valued by the coaching staff in Columbus. He’s likely to make a move up the rankings as a result of his early verbal to one of the country’s premier programs.

With the addition of Bennett Christian, Ohio State has a near 60-point advantage over Penn State in the race for the Big Ten’s recruiting title in the 2022 cycle.

Bennett Christian, 2022 tight end from Georgia and a Tennessee legacy, commits to Ohio State
Watch this video on YouTube.