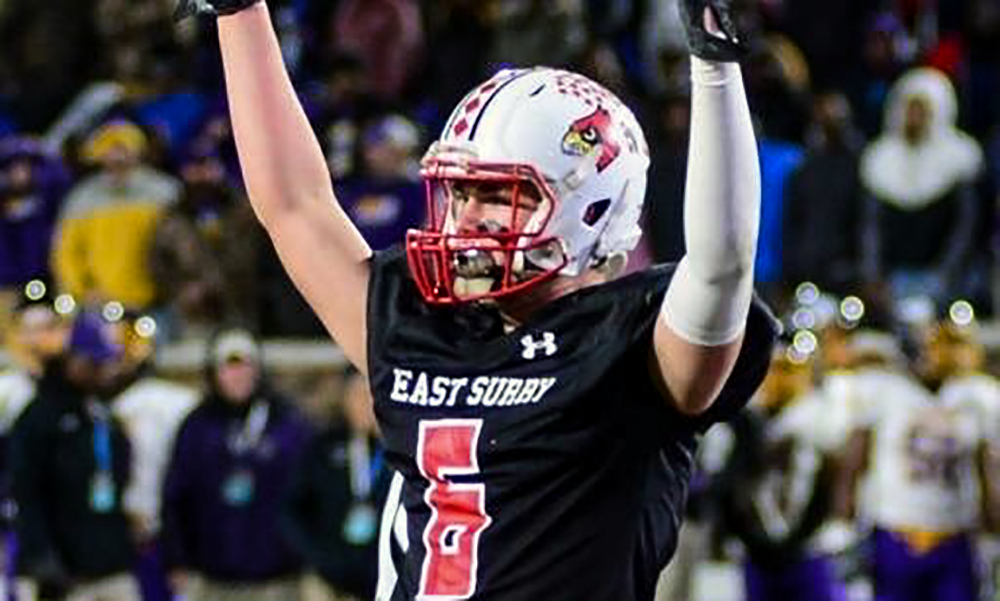 Benji Gosnell is the second tight end to commit to Ohio State in the Class of 2022. (Benji Gosnell/Courtesy)

COLUMBUS — Though he’s not been to Ohio State yet, North Carolina standout tight end Benji Gosnell decided he couldn’t wait any longer to commit to the Buckeyes.

Gosnell, who was targeted early in the recruiting cycle by Ohio State tight ends coach and offensive coordinator Kevin Wilson, chose Ohio State over North Carolina — where his brother Stephen is a freshman receiver — and Florida.

Lettermen Row is analyzing the decision by Benji Gosnell and what his commitment means to the Buckeyes, the Big Ten conference and the national recruiting board in the Class of 2022.

Gosnell is a 6-foot-4, 225-pound prospect who plays tight end and linebacker at East Surry (Pilot Mountain, N.C.) High School. He’s a game changer on both sides of the ball for the Cardinals.

Ohio State is going to line Gosnell up at tight end and whenever North Carolina gets back to playing high school football, the nation’s No. 11-ranked tight end prospect will start to see his role changing at East Surry. That will be good for him down the road.

“The biggest disservice that has happened for Benji is that we were five wide most of the time last year we, and he was one of those five because he’s an extremely good route runner and receiver,” Lowman said. “This year and his senior season he’ll play more with his hand in the dirt and that will play to our strengths. And him being in that role is going to be one strength. The experience of putting his hand down there and having the match down to seven technique or something is just something he’ll have to work on — simply because we haven’t done it a lot — but he is already extremely physical.”

One of 13 children, Gosnell’s personality on and off the field is highlighted by selflessness.

“All the hype around him and the attention that he’s getting. I think he could care less whether he got it or not,” Lowman said. “It doesn’t alter how he works in the weight room or on his own outside sprint work. He’s just so old school, kind of blue collar. You know that attitude and mindset this day and age will take you a long ways. He is completely selfless. I think it goes back to being from a big family. It’s like ‘Let’s go, let’s go together. You know, let’s move on, let’s get it right this time.’

Long, athletic and learning to be a complete tight end, Gosnell is a special talent. That’s why he was so prioritized by the Buckeyes.

For the last three recruiting cycles, there’s been discussion about taking multiple tight ends for Ohio State, and in each instance it held off from doing so. That is not the case in 2022 as Gosnell joins Bennett Christian in the commitment column for the Buckeyes. Locking up two out-of-state players at the position this early is a big win for Ryan Day and Kevin Wilson, but it likely wouldn’t have happened so soon if not for the work put in by Bennett Christian. That friendship helped seal the deal for the Buckeyes.

Ohio State is likely finished at tight end in 2022 with the pair of Bennett Christian and Benji Gosnell, but it’s probably too early to suggest that’s an absolute certainty. Luke Farrell, Jeremy Ruckert and Jake Hausmann will all be out of the program by then, and Cade Stover will be a senior when those two arrive. There are some interesting tight end prospects in Ohio that will continue to be evaluated over the next year should the need for a third tight end arise, though it’s unlikely.

Though the Buckeyes and LSU each have seven commitments, Ohio State has surpassed LSU for the No. 1 spot in the early 2022 national recruiting rankings with the addition of Gosnell. He’s the fifth 4-star commitment in the 2022 cycle, and the Buckeyes now have players from four different states already verballed.