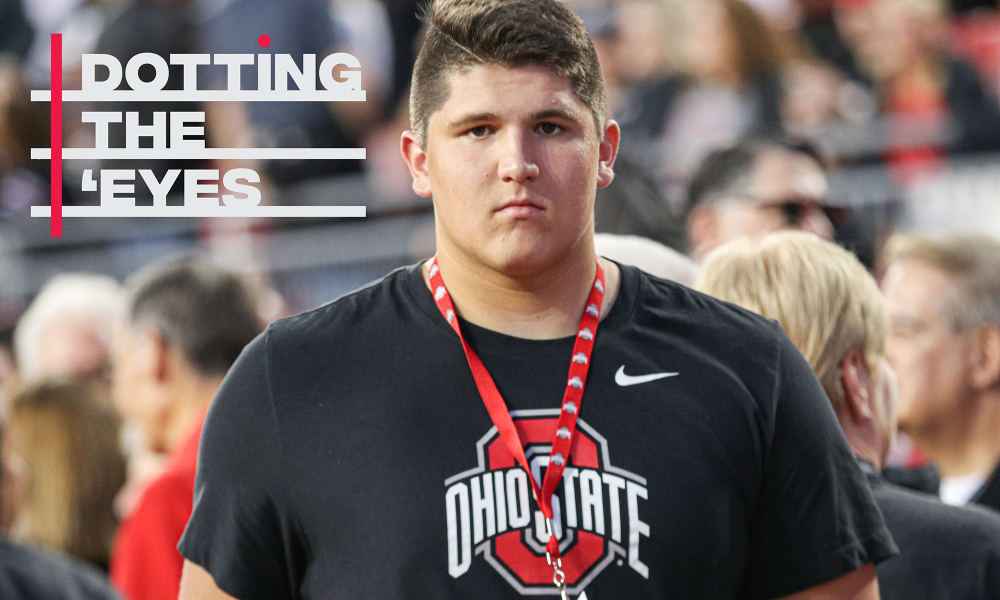 Stay in touch or be left out because Ohio State recruiting is a 24-hour, seven-day-per-week obsession. What’s the latest news as the Buckeyes build for the future? Get that and more Sunday through Thursday on Lettermen Row. On Monday, we discuss Ben Christman’s role as a recruiter and whether or not it could pay dividends in the near future.

Oftentimes, the way a recruiting class gains early success is as a result of aggressive recruiting efforts by the kids who committed early.

Basically, for schools like Ohio State, one of the best things that can happen during a recruiting cycle is for a few of the early pledges to become honest-to-goodness recruiters in their own right.

As we look ahead to the Class of 2021, it seems the Buckeyes have a few of those guys developing into class leaders, especially 5-star defensive end Jack Sawyer and 4-star offensive tackle Ben Christman. Sawyer started things off in a big way for Ohio State in the 2021 class, but in recent weeks it’s been Christman who has ramped up his own efforts — and it seems like that could be close to paying off for the Buckeyes.

The most recent recruiting weekend hosted by Ohio State for the Penn State game had a different feel to it, primarily because Sawyer wasn’t there as he recovers from knee surgery. It was all Christman leading the charge as the Buckeyes welcomed in a number of big-time offensive line targets like Rocco Spindler, J.C. Latham, Donovan Jackson, Jager Burton, Tristan Leigh, Trey Zuhn and more.

“It went really well,” Christman said. “They’re all good guys. Rocco and Donovan really loved it, and I know Tristan and Jager were also impressed. I didn’t get a chance to talk with Latham that much, but I’m sure he enjoyed it.”

Christman was in Columbus at every opportunity this season, pushing hard to try to land future teammates and future linemates. He knows there’s value in being on campus and took full advantage of the weekends that were presented to him this season.

“[Game-day weekends] are huge,” Christman said. “That was a big game, and the whole experience of before, during and even after the game had to have been awesome for everybody to see.”

To make it even better for Christman? The availability of Paris Johnson and the Buckeyes 2020 offensive line commitments, who aside from Luke Wypler were all on hand for the Penn State game as well.

“They’re all cool,” he said. “They talked to the guys I was talking with as well. You come to Ohio State to be a part of an elite group, and that’s the standard for every recruiting class.”

The question from here is when will those efforts pay off? It may not be that much longer.

“The visit went great,” Hansen, the nation’s No. 8-ranked 2021 tight end, told Lettermen Row. “I actually got there on Friday morning so I could spend time with the staff and see everything before it got hectic on game day. They talked about all the extra measures they take to make sure players get lined up with good jobs after football. Those were really unique.

“I’d say the facilities really stood out, but everything was very high end. Ohio State has everything you need to become the best possible player all in one building. Plus, the game-day atmosphere was wild. It was very cool to see.”

The Buckeyes have not offered the 6-foot-4, 222-pound tight end yet, though 17 schools have — including LSU, Penn State Michigan and Georgia. He left Columbus with a great sense of who the Ohio State coaches are, but he isn’t sure where things go from here with the Buckeyes.

“It was definitely a great first meeting,” Hansen said. “All the coaches, players too, were great people. Everyone we walked past said hello and welcomed me which was cool. And obviously the school is great.

“They didn’t give much of a message about a potential offer except for that there is definitely interest from them, so I guess that remains to be seen.”

Ohio State is likely to pursue two tight ends in the Class of 2021 after choosing to take just one in its 2020 class.

Another 2021 tight end that visited for the Penn State game but does have an Ohio State offer is Bowling Green (Ky.) 4-star prospect Jordan Dingle.

Dingle, who earned his offer from the Buckeyes at a one-day camp in June, has been to Columbus two times this season. There continues to be a lot of mutual interest between him and Ohio State.

“Everything was really good,” Dingle told Lettermen Row. “It was nothing too different from before. I see they have a lot of support no matter who they play.”

Dingle has continued to be a primary target for Ohio State tight ends coach Kevin Wilson. That’s where the majority of his conversation with the Buckeyes has been and was during his trip to campus for the Penn State game.

“I mainly talked with Coach Wilson,” Dingle said. “A little before the game and then some more afterward.”

After a trio of trips to Ohio State in the last five months, it would be understandable to think that the 6-foot-4, 230-pound tight end is close to a decision. That’s not the case, but he admits he feels very comfortable with what he’s seen at Ohio State.

“Ohio State has shown me what they have to offer and it’s a school I’m very interested in,” Dingle said. “But I’m still looking at what other schools have to offer as well.”