Connect with us
A.J. Harris continues to grow a relationship with a number of schools as he becomes a national recruit. (Birm/Lettermen Row)

Ohio State football recruiting can be a wild ride full of twists and turns as recruits from all over the country maneuver their way to signing day. Lettermen Row is here to help navigate the tumultuous roads by getting to the heart of the matter with the young football players and Ohio State coaches and staff members themselves. This week’s guest is 2023 cornerback A.J. Harris, a rising junior prospect who has become a priority for the Buckeyes quickly.

Spring is a big time for football recruits around the country and few have capitalized on like A.J. Harris has over the past few weeks.

A 6-foot-2, 175-pound cornerback from the Glenwood School in Phenix City, Ala., Harris has skyrocketed up national recruiting boards. He went from being an unranked prospect just a month ago to now being the nation’s No. 2-ranked 2023 cornerback. A run of college offers from Ohio State, Alabama, LSU, Florida State and others in mid-March came on the heels of a big-time performance at the Under Armour Camp Series in Atlanta and the rankings boost came quickly after.

The offer from the Buckeyes came via Kerry Coombs. Ohio State rarely offers players from Alabama, but Harris helped make it easier. He’s been insistent that living in the heart of SEC country doesn’t guarantee that’s where he will play college football.

“[Coombs] was like: ‘I heard you would, so you have to give me your word you will give us a chance,’” Harris said. “And I am going to call them weekly. That’s a school with so much tradition, I really want them to be a top school for me.” 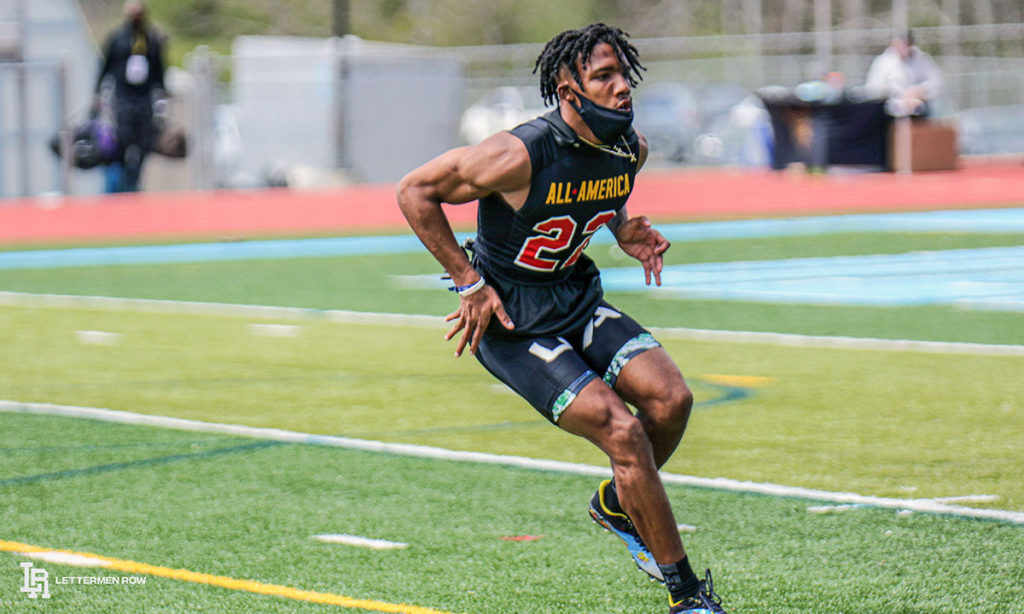 Quick feet, long arms and a desire to be better every day has made A.J. Harris a national recruit in a short period of time. (Birm/Lettermen Row)

The second call has happened, and it introduced A.J. Harris to Ryan Day for the first time. That meeting was a hit.

“He was really cool,” Harris said. “I really liked his style. It was honest, you could tell. A lot of coaches tell me: ‘Oh, this is the place for you.’ But he was different. He was telling me: ‘This place isn’t for everyone, so you have to really want to be here.’ That was different for sure.”

Why is Harris interested in Ohio State? How did growing up in a military household help prepare him for the challenges of the recruiting trail? Why does he think he wants to commit as early as this upcoming summer?

The fast-rising star from the Alabama/Georgia line joined Birminology to talk about those things and more with Lettermen Row.