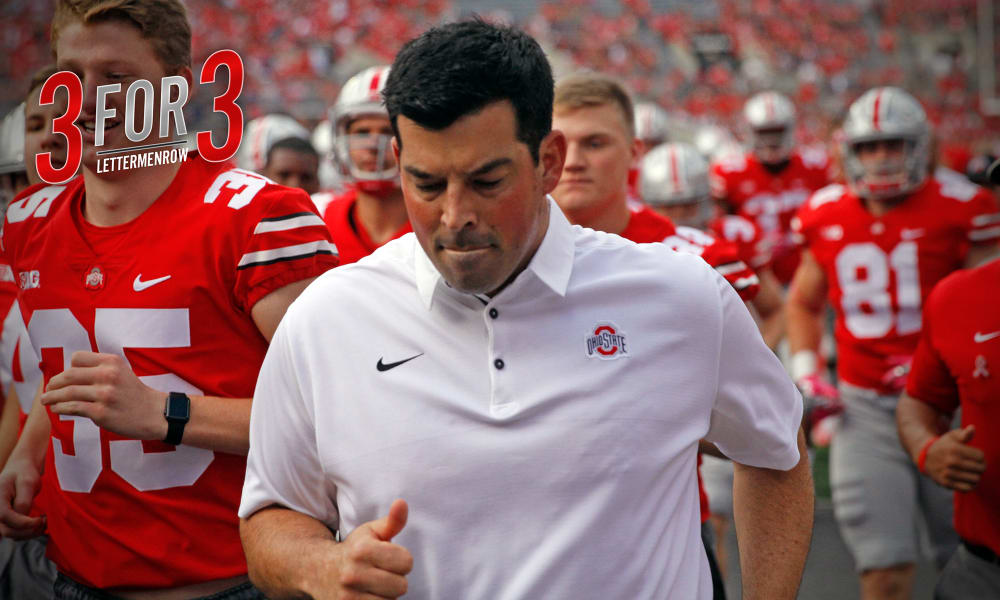 Ryan Day could have some major work ahead of him if Ohio State decides to move on from Urban Meyer.

So, it’s been a pretty interesting week around here, hasn’t it?

There’s a little situation happening around the Ohio State football program right now, as you all no doubt know. Urban Meyer is on paid administrative leave while the school — with the help of some outside investigators — looks into exactly who knew what and when about former wide receivers coach Zach Smith’s alleged history of domestic violence against his ex-wife.

Right now, there’s simply zero way to know what happens when it comes to Urban Meyer’s future at Ohio State. There are more questions right now than answers, and while that certainly fuels the fire for those who want to see a firing at any cost, it doesn’t satisfy the need for truth amid this difficult and disturbing time.

There are much bigger things to consider here than football. There are hundreds of people’s families that could potentially be impacted by whatever the outcome of these investigations are. There are though, of course, football implications and we here at Lettermen Row cover Ohio State football. In a time where there are nothing but “what if” scenarios being thrown around — frivolously in most cases — here we are, forced to do the same thing.

In that vein, I present this week’s 3 for 3 question, which Alex Gleitman and Marc Givler, from 247Sports and Rivals.com respectively, have graciously granted their input on.

Today’s question then is this:

If Urban Meyer never returns to Ohio State’s coaching staff, is Ryan Day the best option for the Buckeyes future on the recruiting front or is another coach, and why?

I think it’s hard to say right now. It probably depends how Day would handle himself through the end of the 2018 season and who the available pool of candidates would be after. It’s hard to measure Day against anyone else without knowing exactly who is a realistic candidate to take the job.

That said, I do think Ryan Day is more than capable of being the next head football coach of Ohio State, on a permanent basis.

He’s learned from some of the best in the business, is highly regarded as an offensive mind by many in the industry, would provide great continuity for the Ohio State program (similar to Lincoln Riley from Bob Stoops at Oklahoma), and has started to show he can more than hold his own on the recruiting trail. He’s going to have to do some catching up to get where Meyer is as a program CEO and recruiter, but he has shown the early signs — he’s only 39 — that you’d want to see from a star head coach in the making.

From a short term recruiting standpoint, Day is the right choice.

His relationships with the headliners of the 2019 class in Garrett Wilson and Harry Miller would be helpful in trying to keep things together in the short term future. He’s also the top guy for both quarterback commits Dwan Mathis in 2019, and Jack Miller in 2020, so there is certainly a case to be made for him from a recruiting stability standpoint.

Ultimately how he would perform as head coach during the 2018 season would tell the tale on how effective that initial recruiting effort would be, however. A season like Luke Fickell had in 2011 would certainly shake confidence, while a 10-win type of season could keep things well on track for the Buckeyes.

Anyone who knows me and has talked to me about him knows  that I’m a huge fan of Ryan Day and think that he’s a great choice for the Buckeyes in the immediate and long-term future. I think he’s a guy that will become a top-tier head coach someday and if Ohio State is where that begins for him, then more power to him. A lack of head coaching experience certainly hasn’t hurt Lincoln Riley, as Alex alluded to.

That being the case, there are definitely a ton of coaches around the country who would jump immediately at the chance to take over the reins in Columbus. I don’t think that list includes Nick Saban, Dabo Swinney, Tom Herman or Jim Harbaugh, but I don’t think there are many other coaches who would be on the “no way in hell” list. While I believe Day is a worthwhile choice — most especially because I think he’s already a force to be reckoned with on the recruiting trail — there’s no reason Ohio State wouldn’t at least consider other, outside options. Heck, there are other internal options that are also real candidates, like Greg Schiano would be.

Day is, as Marc said, the lead recruiter for both of the Buckeyes top commitments in 2019. He’s been a primary voice on the trail for Ohio State since arriving on campus, and has made real connections in the Southeast and Southwest, while also helping Ohio State shore up its quarterback room after years of coaching changes and inconsistent play.

To me, Day would be the best option not just because he’s already on staff and would provide a measure of seamless continuity, but because he’s got all the tools to be a big-time star as a coach for decades to come.