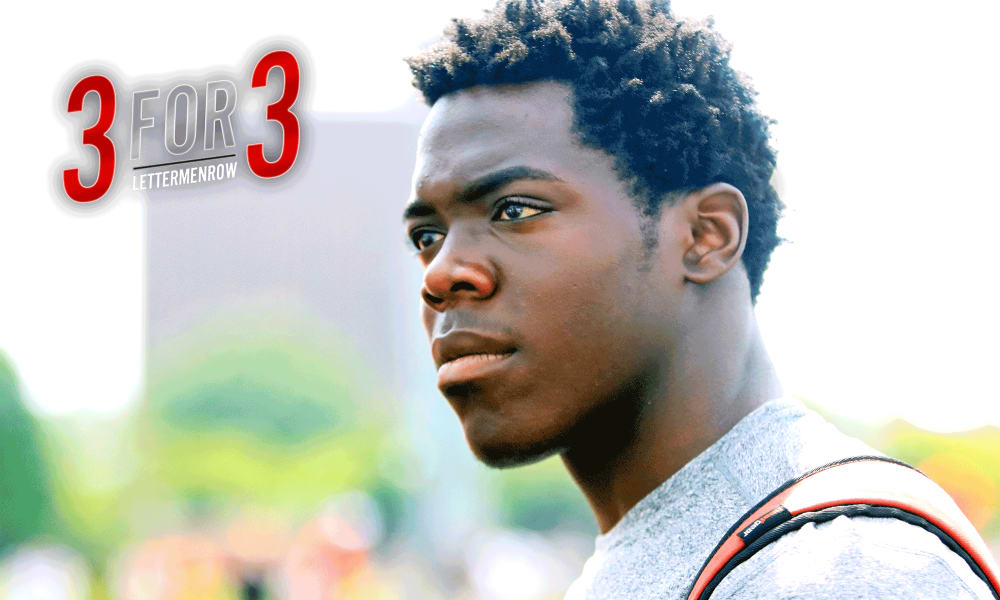 There are a lot of great places to get Ohio State recruiting news. Lettermen Row brings the best Buckeyes analysts to one spot for a pressing question on the Buckeyes every Friday at 3:oo p.m. Check in weekly for thoughts from some of the country’s most respected college football recruiting analysts about all kinds of Ohio State-related questions. This week we’re talking about 5-star defensive end Zach Harrison and what the Buckeyes should do if they fail to land him.

Cue up the worry machine again, Ohio State fans. This weekend, Zach Harrison is visiting Michigan as the Wolverines host Wisconsin in a prime-time game on Saturday night.

The visit is, on the surface, not much different than Harrison’s most recent game-day visit — to Penn State when they hosted the Buckeyes — but it’s another example of Harrison trying to narrow down his choices from three to one. Yes, a return trip to Ohio State for a game is expected at some point, but with the 6-foot-5, 245-pound Harrison it’s impossible to predict exactly what he’ll do, so nothing is set in stone.

It seems that with every day that passes the odds of Harrison picking Ohio State over Penn State and Michigan shrink lower and lower. The Buckeyes have continued to recruit him as diligently and consistently as they can, but it’s absolutely incorrect to suggest that Urban Meyer’s program feels any “confidence” in this pursuit right now. Harrison is a wild card and has been for much of the last year-plus.

On the Buckeyes roster right now, there are five defensive ends in the rotation, though Nick Bosa remains sidelined. In 2019, Ohio State will line up Chase Young and Jonathon Cooper as the starters and will roll out sophomores Tyreke Smith and Tyler Friday behind them.

Do the Buckeyes need to add another defensive end in 2019 if Harrison turns away from Ohio State? That’s today’s Lettermen Row 3 for 3 question. We’re once again assisted by Andrew Ellis of elevenwarriors.com and Marc Givler from the Rivals.com network and BuckeyeGrove.com.

If the Buckeyes lose out on Zach Harrison, do you think they need to take another  2019 DE or should they wait for what could be a major haul in 2020?

If Ohio State misses on Zach Harrison then I do expect that they’d expand the search radius and find someone else to bring in at the position.

The Buckeyes took four players last cycle who projected at defensive end, and it’s looking like all four are sticking on the edge. Tyreke Smith and Alex Williams were the obvious ones, but I think there was some uncertainty surrounding Tyler Friday and Javontae Jean-Baptiste’s eventual roles.

If Harrison goes elsewhere they could hold off until 2020, but I really think they’d try to bring in another pass rusher to complement Noah Potter in 2019.

I don’t think Ohio State is in a situation where taking a defensive end just to take one would be a wise decision.

The numbers will be there next year and it would be reasonable to expect a jump from young guys like Tyreke Smith and Tyler Friday to be made to where it would give the Buckeyes at least four quality defensive ends along with Chase Young and Jonathon Cooper.

Unless it is pulling off a major coup like Nolan Smith, I would wait for a loaded 2020 class and hopefully the lack of defensive ends in 2019 would appeal to some of those guys. It is unlikely that any Plan B type of guy in 2019 is going to be able to help you next fall and if they can’t help you next fall and end up taking up a scholarship for a few years that could be occupied by a better player, well then you’ve just compounded the problem in my opinion.

I know everyone reading this is hoping it becomes a moot point because there are so many reasons that Zach Harrison to Ohio State makes sense, but it feels like this is moving away from the Buckeyes, at least as I sit here today.

So, rather than allowing the handwringing that any Harrison announcement will bring to bog us down, let’s assume the worst and ask what happens next.

As Marc alluded to, there are players out there like Georgia commit Nolan Smith that would change the dynamic of this whole thing, but even when Smith visits Ohio State (and I am confident he will) he’s quite a longshot to join the Buckeyes. If you’re feeling that there’s a comparison to last cycle’s Jackson Carman/Nicholas Petit-Frere situation, I’d temper your optimism.

Other prospects that would warrant signing, like Florida’s Khris Bogle, just haven’t been given the “love” they’d need to really consider the Buckeyes this late while Ohio State has put all of its eggs into the Zach Harrison basket.

Maybe there’s a reason they’ve done that, though? Ohio State is not the type of program to leave itself without a Plan B, even when they feel confident in a player or have a guy committed. A secondary option always exists, but in this case, it doesn’t? I think that’s intentional and I think it’s because the Buckeyes feel only a player like Harrison or Smith are worth adding in the Class of 2019, for a few reasons. The depth and talent of the 2020 class is one of them, but the fact that Ohio State doesn’t reach for players to fill perceived holes.

I don’t see any other 2019 defensive ends worthwhile for Ohio State to chase in 2019 beyond Harrison, Smith and Bogle, and for that reason, I think if Harrison breaks for Michigan or Penn State, the Buckeyes are likely to stick with Potter only at defensive end in this class.