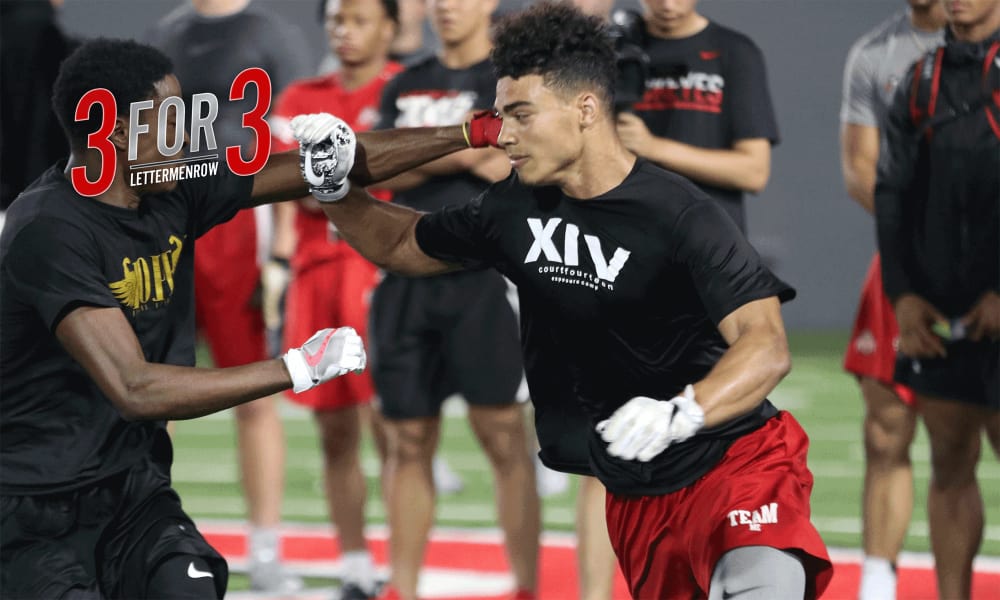 It’s time for 3 for 3 on Lettermen Row, where recruiting analysts from around the Ohio State beat join me to discuss the issues of the day around Buckeyes recruiting.

With this week’s news that Urban Meyer will be reinstated by Ohio State following a three-game suspension, it may be time to see the Buckeyes get back to normal business on the recruiting trail. The timing of Meyer’s administrative leave and now his subsequent suspension wasn’t terrible for Ohio State, since the majority of it has been within a recruiting dead period, but the Buckeyes need a kick-start of momentum to get things working in the right direction as signing day approaches in December.

Someone has to get that ball rolling for Ohio State and its 2019 recruiting class, which is currently ranked as the No. 9 class in the nation. Today, we’re putting ourselves on the spot.

Call your shot: Who will be the next Class of 2019 prospect to commit to Ohio State?

This is really tough right now given all of the recent events, but I’ll still go with Zach Harrison. I know the five-star is focusing on his final high school season and genuinely seems torn, but I do think he’s a bit closer than other top targets like Jameson Williams, Elijah Higgins, etc.

It could be a while before someone pops, and that’s no surprise given the current climate. I just think Harrison could make it back to campus virtually any time and Larry Johnson has been a constant in this one. I’m sticking with the state’s top player for the time being.

Yes, Williams has four official visits still left to take if he chooses to. And yes, Alabama and Oregon are certainly worthy opponents in this battle. But Williams is a big Urban Meyer fan and has recently stated that Ohio state is still right at the top where they were before this whole situation started. He has also said that despite these visits that he is setting up, that he may indeed decide at any point that he feels is the right time. So it is possible that all of those visits aren’t actually made.

2019 is so strange right now as nothing looks completely imminent on the commitment front but if Williams sets up an unofficial visit to Ohio State as he says he is going to for this fall I could see the Buckeyes landing him on that visit.

I don’t want to be a bringer of bad news, but the truth is that right now there’s little momentum toward any 2019 prospect committing to the Buckeyes anytime real soon. Odessa (Texas) defensive back Peyton Powell was close a month ago, but with everyday that passes it seems more and more likely he picks Oklahoma when he makes a decision in late September. The Buckeyes could make a move for Frankfort, Kentucky’s Wandale Robinson if he decides for sure to take an official visit, but that’s up in the air still. He’s a good choice for a surprise pick, I think, again depending on his official visit.

There are other players out there that have an offer from the Buckeyes and no set timetable for a decision. Guys like Maryland defensive tackle D’von Ellies, for example, and West Virginia’s Brenton Strange. Even though the Buckeyes have a tight end now committed for 2019, I think Strange is a player that still bears watching.

However the Buckeyes get back into the commitment column in the Class of 2019, it’s unlikely to be a guy that everyone is expecting. I think it’s also unlikely that they’re stuck in neutral all the way to December, though, so I’m going to walk out on that limb and pick Brenton Strange.