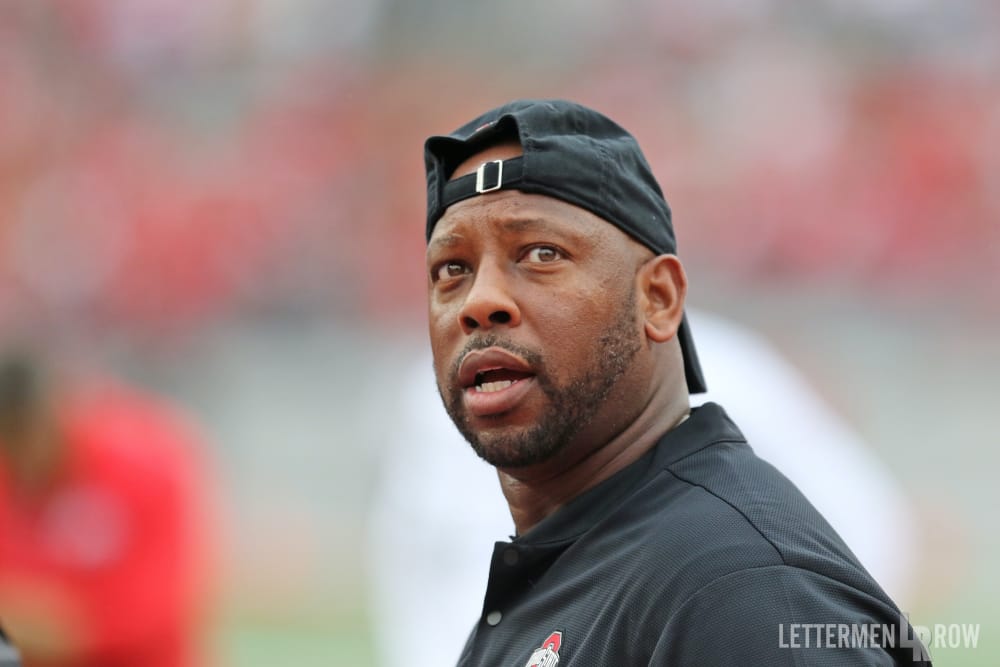 Ohio State assistant Taver Johnson is looking for one more cornerback in the Class of 2019. (Birm/Lettermen Row)

Have a question about Ohio State recruiting? This is the place for you, five days a week. Submit your questions on Twitter or on the Lettermen Row forums. Check in daily to see what’s on the mind of Buckeyes fans all over the country. Today’s question is about Ohio State and its 2019 cornerback recruiting.

What's the plan at corner in 2019…IF…HYPOTHETICALLY…Jordan Battle were to leave the class? Do you think the staff would be content w/ Hickman/Shaw as the only DBs? I imagine it'd be easier if Sheffield/Arnette stick around for another year

I think it’s pretty obvious that Ohio State is going to need to add at least one more cornerback in the 2019 recruiting class, and I’d believe that even if it was a sure bet that Jordan Battle was staying in the class.

It’s not, though, as Alabama keeps coming and Battle keeps listening.

Coming into this season, there was a belief that Jordan Fuller, Damon Arnette and Kendall Sheffield would be the next defensive backs to leave Ohio State early for the NFL. But as the year has unfolded, that has become less likely. It’s still probable for Fuller, but Arnette and Sheffield have had underwhelming seasons and may benefit from another year of seasoning, though a decision to leave wouldn’t be surprising. The same decision will be in front of Jeffrey Okudah and Shaun Wade after the 2019 season, so it’s pretty vital for Ohio State to restock the defensive backfield now — and every recruiting cycle.

I think Ronnie Hickman is a pretty solid bet to start his career at safety, and Bryson Shaw could play either spot. If the Buckeyes can hold on to Battle, he’s a player that will make an impact as a freshman at cornerback, but they’ve still got to add another. That brings us to Apopka (Fla.) Wekiva cornerback Renardo Green, who took an official visit to Ohio State last weekend.

Green is a Florida State commitment. But that verbal has been on shaky ground for months, and he’s visited Ohio State twice since the summer. I think he’s a potential quality addition despite his 3-star status and relatively low recruiting ranking at No. 46 among cornerbacks. Florida State and Ohio State don’t chase scrubs at cornerback, after all. If the Buckeyes can add Green, he could serve as needed depth in the signing class and as potential insurance if Battle bolts.

Ohio State has also maintained contact with Pittsburgh’s MJ Devonshire, and I think if things go awry with Battle, he’s a player that may decide to turn up the heat on in December and beyond. He was rumored to be attending the Michigan game, but his father told Lettermen Row last week that visit was not actually planned as reported.

In my mind, the ideal situation for Ohio State is simple: Keep Jordan Battle and add Renardo Green.