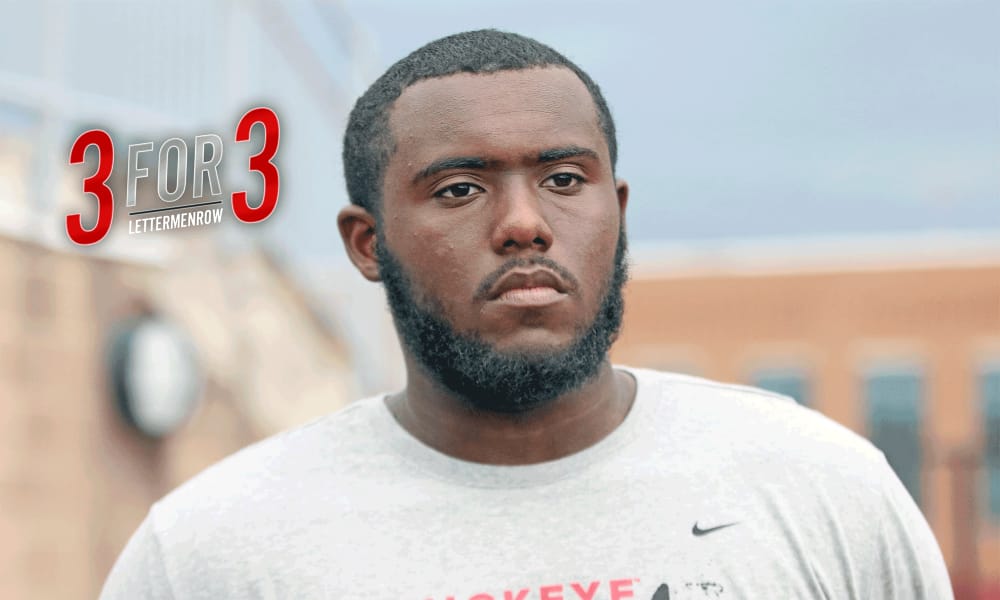 Jonathan Allen remains an interesting prospect -- and project -- but does Ohio State want to take that on? (Birm/Lettermen Row)

There are a lot of great places to get Ohio State recruiting news. Lettermen Row brings the best Buckeyes analysts to one spot for a pressing question on the Buckeyes every Friday at 3:oo p.m. Check in weekly for thoughts from some of the country’s most respected college football recruiting analysts about all kinds of Ohio State-related questions. This week we’ll discuss the Buckeyes recruiting options as they search for an offensive tackle after Walter Rouse eliminated them this week.

Earlier this week Lettermen Row informed you that the Buckeyes were out of the race to land 3-star offensive tackle Walter Rouse.

That’s pretty bad news for those of you think — like I do — that Ohio State absolutely needs to add another pure offensive tackle to its 2019 recruiting class. Yes, both Ryan Jacoby and Doug Nester could play tackle, but I personally see Nester at guard and I don’t think it’d be too surprising if, down the road, that was Jacoby’s place also.

Darnell Wright, the country’s second-ranked offensive tackle is still out there, but there’s been little to no momentum gained by the Buckeyes in this recruitment over the last few months. He’s definitely not an Ohio State “lean” or anything close to it at this time.

Something has to give and that brings us to this week’s 3 for 3 question. Once again, I’m joined by Marc Givler of Rivals.com and Andrew Ellis of elevenwarriors.com.

With Ohio State now out of the race for Walter Rouse and seemingly not at the top of Darnell Wright’s list, do you think the Buckeyes should scrap further OT recruiting for 2020 or take a flyer on Jonathan Allen?

Even with the hot start to 2020 I feel like there’s no way Ohio State scraps or gives up on offensive tackle recruiting for the current class. Ryan Jacoby should be able to play tackle and Doug Nester may be an option as well (guard seems more likely), but Greg Studrawa and company really need to add at least one more true tackle to the class.

I know Jonathan Allen is out there and I feel he’s a guy Ohio State could get any time between now and February; even if that means flipping him from a school like Cincinnati down the road. But the best way to proceed – in my humble opinion – would be to keep chipping away on Darnell Wright and hope they can sway him from the likes of Tennessee and Alabama while also turning things up on Trevor Keegan. The Illinois tackle is someone I feel the Buckeyes could have potentially landed earlier in the process, but he now seems more open with the Buckeyes, Wolverines, and even Georgia all very much in the picture. If we scratch Wright from the equation then I think the best outcome would be getting Keegan and adding/flipping Allen at some point before signing day.

As usual, I’m going to be difficult and sort of split the difference.

Jonathan Allen is very, very raw. Raw to the point that I think it creates some concern about how long it would take to get him ready to play at such a high level and if that’s the case, additional concern that he would just be recruited over in 2020. But there’s no question that Allen is an impressive physical talent and tackle is such a premium position.

I don’t love the numbers right now for the Buckeyes at offensive tackle and I think they do need to make a real effort to bring in another tackle body in this 2019 class. So if I were calling the shots, I’d be scouring the nation watching offensive tackles to rebuild the board a bit, while keeping an eye on Allen’s development and improvement. If Allen makes real gains this year, take him. If he doesn’t, hopefully you’ve been able to dig up a few other potential targets whether it be a late-bloomer or a casualty of the coaching carousel which won’t start spinning for at least another month.

I think you’re both right, I think.

I don’t think that the task of developing Jonathan Allen, with so many other guys around the tackle position lacking experience for Ohio State, will make sense. Maybe that changes, maybe it doesn’t. but for now, I think he heads to Cincinnati or a program of that nature.

The problem is that beyond him, there’s not a single guy that really adds up for the Buckeyes. They were always a long shot for Rouse, who is down to Stanford and Notre Dame, but to consider losing him to the Irish, who already have tackle pledges from Quinn Carroll, John Olmstead and Andrew Kristofic — three players the Buckeyes offered — would be insult to injury.

Where do the Buckeyes turn though, because, again, I think it’s imperative that they find another offensive tackle to join this class. They’ve recruited Missouri well, but at the moment there’s no relationship with a guy like 4-star Danielson Ike who they had reached out to early in the process and is the country’s No. 23 tackle. Way down the list is Luke Griffin from Chatsworth (Ga.) North Murray High School, who has one major college offer (from Florida) as the No. 48-ranked tackle.

Maybe someone local pops on tape in his senior year, and that’s almost what the Buckeyes need to hope for right now. They have Paris Johnson and Jake Wray committed for 2020, and are very much involved with Kansas’ Turner Corcoran, but even if they could land all three of them, there’s an undeniable need for another offensive tackle in 2019.