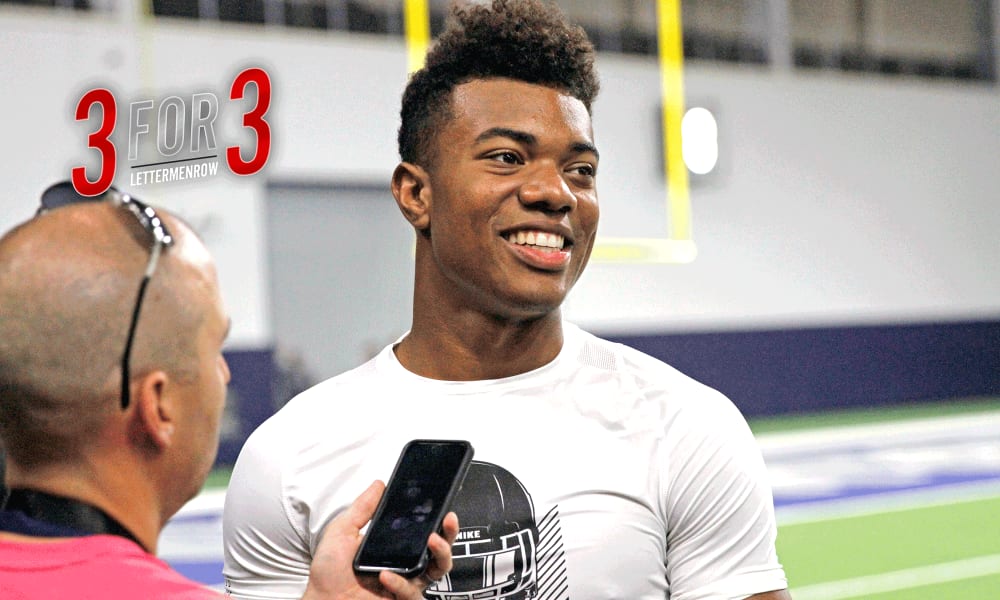 Ohio State has maintained its contact with Elijah Higgins but has it been enough to land him? (Birm/Lettermen Row)

There are a lot of great places to get Ohio State recruiting news. Lettermen Row brings the best Buckeyes analysts to one spot for a pressing question on the Buckeyes every Friday at 3:oo p.m. Check in weekly for thoughts from some of the country’s most respected college football recruiting analysts about all kinds of Ohio State-related questions. This week we’ll discuss the Buckeyes options at wide receiver as they wait for a decision from top target Jameson Williams.

The Buckeyes could be days, or weeks, away from landing their next 2019 commitment.

At least that’s the vibe being given off right now by St. Louis wide receiver Jameson Williams. It appears the 4-star prospect will pick between the Buckeyes and the Alabama Crimson Tide sometime “soon,” whatever that means, and right now, my belief is that Ohio State should be considered the frontrunners to land him.

It’s important for the Buckeyes to bring in a handful of receivers in 2019. Why? They’re going to lose at least four wideouts from the 2018 version of Zone 6 and they’ll need big-time players and vocal leaders to be added into that room for the future.

That brings us to today’s question:

If the Buckeyes land Jameson Williams, who’s the next wide receiver to join them from the group of Wandale Robinson, Elijah Higgins, David Bell? Also, who is your preference and why?

I do think the Buckeyes are going to add Jameson Williams to the class and it’s sounding as though that could happen within the next few weeks. Obviously having Garrett Wilson and then a speedster like Williams in the fold would be an incredible start at wideout, but one has to think Brian Hartline will look to at least one more to the fold for 2019.

I think the most logical addition would be Wandale Robinson. He’s my personal favorite of the group and I feel he should be the choice given the different skill set he would bring to the table. Elijah Higgins and David Bell are both extremely talented, but with Wilson and presumably Williams in the mix, I just think it makes sense to look for a different kind of player.

Yes, he’s very much undersized but Robinson has the look of someone who could be a monster in the slot /H-back role. He reminds me of Rondale Moore from the previous class and we all saw what Moore did in his debut with Purdue. Getting the Kentucky native on campus again last weekend was a big step in the right direction. I think he’s the most likely addition, but the staff needs to get him to town for an official.

I don’t know that I love the odds for any of these three right now, but I’ll say Higgins at this point as the one most likely to end up at Ohio State.

I think the Buckeyes have picked up a little bit of momentum with Robinson, but there is still work to do there as they try and play catch up. The sense I have on Bell right now is that the Buckeyes could be running fourth so he is probably the least likely of the three at this point. Higgins has run very hot and cold over the past six months but the relationship with Garrett Wilson and the new brain trust when it comes to receiver recruiting making him a priority should be helpful. As for which one I would prefer, I’m not sure there’s a wrong answer here.

All three prospects are great football players and bring different elements to the table. But I’ve always been a huge fan of David Bell’s game. He can stretch the field vertically, he has the size and physical prowess to win the 1-on-1 battles, and while he isn’t as explosive as Robinson, he has the ability to make things happen after the catch. He’s also a big-time winner in just about everything he does.

I’ll come out of the gate and get two things out of the way here. First, I think Elijah Higgins is exactly the type of kid you want on your football team and in your locker room. Secondly, no matter who Ohio State adds to Garrett Wilson and (presumably) Jameson Williams, they’re going to find themselves with a really good football player.

I agree with Marc on David Bell, who I think has the highest upside and NFL potential of these main three we’re discussing today, the kid is a freak athlete who always seems to win. That being said, I don’t get, and have really never gotten, the vibe that he was that into Ohio State for some reason. Was that because he wasn’t a priority for Zach Smith? Maybe, maybe not. Either way, he’s the least likely of this group to end up in Columbus. Elijah Higgins is another guy that wasn’t always on the top of the list for Smith it seems, so Ryan Day’s involvement has kept Ohio State in the conversation, but I bet they wish they hadn’t had him for an official visit in June at this point because waiting until November may have yielded better results as far as knowing where everything stood between the two sides.

Wandale Robinson, I don’t know, I just feel like something is building there with him and the Buckeyes. He took last weekend’s unofficial visit in a quiet, under-the-radar manner and there’s no doubt it was an explorative visit for him, making sure the recent push from Ohio State over the phones, via text, etc. were sincere and not just lip-service. I think he realizes now that Brian Hartline wants him badly in the mix and there’s a lot of good reasons a young receiver would pick the Buckeyes at this point. I’m going with Ellis and saying yes, Wandale Robinson, come on down.