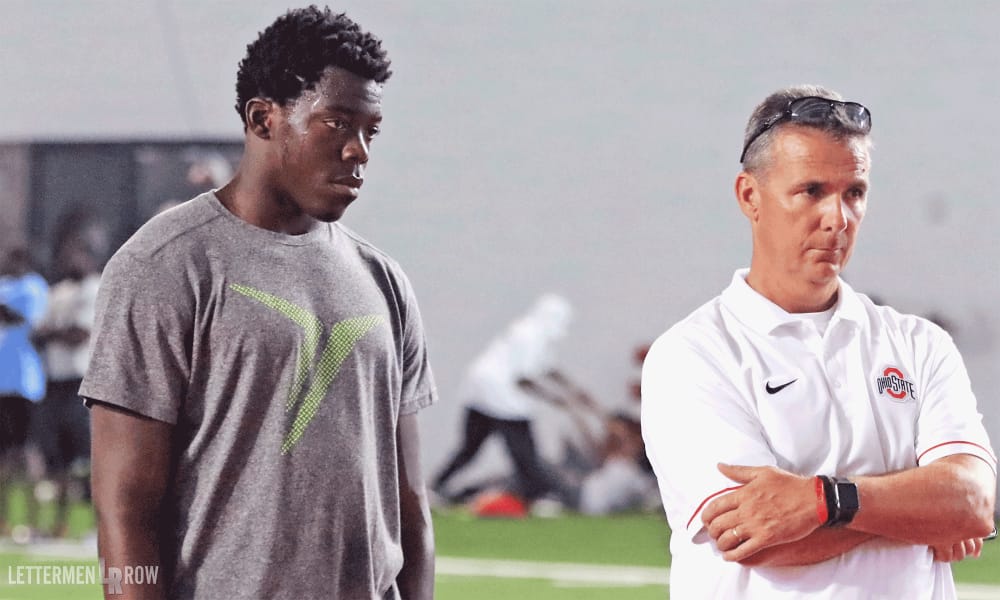 Ohio State continues to recruit Zach Harrison, but it appears the two sides are no closer than before. (Birm/Lettermen Row)

Have a question about Ohio State recruiting? This is the place for you, five days a week. Submit your questions on Twitter or on the Lettermen Row forums. Check in daily to see what’s on the mind of Buckeyes fans all over the country. Today’s question asks about Zach Harrison and what’s the latest in his recruitment.

I’m breaking my vow of silence today and I’m doing it for two different, yet legitimate, reasons.

Back in August, I wrote here that I was going to stop writing about 5-star defensive end prospect Zach Harrison until some actual news occurred or some change in his recruiting status went down. The fact is that everyone wants to hear about the 6-foot-5, 245-pound athlete every single day, but he isn’t the type of the kid who wants to be the center of attention. So, in an attempt to respect the privacy of Harrison and his family, I’ve tried to stop writing about him.

However, it’s been almost two months and I do have a job to do. Part of that job is writing about the players Ohio State is targeting — and of course, Harrison fits that bill.

It’s quite a conundrum!

Either way, I’ve decided to reopen the floodgates, update Harrison’s recruitment and give my opinion on things. Officially, here’s the Recruiting Question of the Day:

Wheres Zach Harrison going to go? And how do you know when hes seemingly playing his cards so close to the vest?

If I may, I want to try to officially answer this by first harkening back to the August post I referenced earlier. It still gets to the general heart of the matter.

Let me be very clear as I try and answer this: No one knows at this point about what Zach Harrison feels and thinks outside of him and the people who live in his house.

I know that’s not the answer people want, but that’s where we are. In no particular order, it’s Ohio State, Penn State and Michigan fighting for Harrison’s commitment. Yes, he’s been close to Meyer, so it’s natural to assume that any kind of dent to the reputation of the coach will require some repair. But I would caution against assuming anything when it comes to Harrison’s recruitment.

However, there have been a few things that have changed. Harrison has visited both Penn State and Michigan unofficially, stopping at both campuses for game-day visits in primetime, high-stakes atmospheres. Harrison also visited Ohio State a week ago, but there was no contact with the football staff and it was just your standard college visit, which can be viewed in a couple of ways, I suppose.

First, yes, clearly Harrison is still considering those three schools. Ohio State has the unique advantage of being so close to home that he can stop by whenever he wants, but it can also be reasonably assumed that if he was in Ann Arbor or State College for a school visit he’d likely mix in some time with the coaches.

There are a lot of assumptions people can make when following recruiting closely, though, and it’s almost always a bad idea to do so. Instead, we’re going to focus on the facts: When Zach Harrison is ready to make a college choice, he will. Ohio State is working hard to be the choice, but right now it’s impossible to suggest that the Buckeyes are any kind of leader or that they are the favorite. In fact, if I was making an assumption, it’d be that Harrison will end up at Michigan, but there’s still time for things to flip around. Ohio State had all but lost Tyreke Smith to Penn State in 2018 but managed to pull off the Hail Mary and sign him. They may need to do that again.

I do not know if Harrison is going to return to Ohio State for a game-day visit as he has Penn State and Michigan. I assume he will, and whether that’s for the Nebraska game, or more likely the Michigan game, it’s going to be just one more data point he uses to put everything together.

Zach Harrison is the most important recruit on the board for Ohio State in 2019 and the Buckeyes know that. They’ve never taken his commitment for granted and have given him ample reason to feel confident in his future if it involved the Buckeyes. So have Penn State and Michigan.

Whatever he decides, just remember: It’s his decision, and he’s obviously not making it lightly.