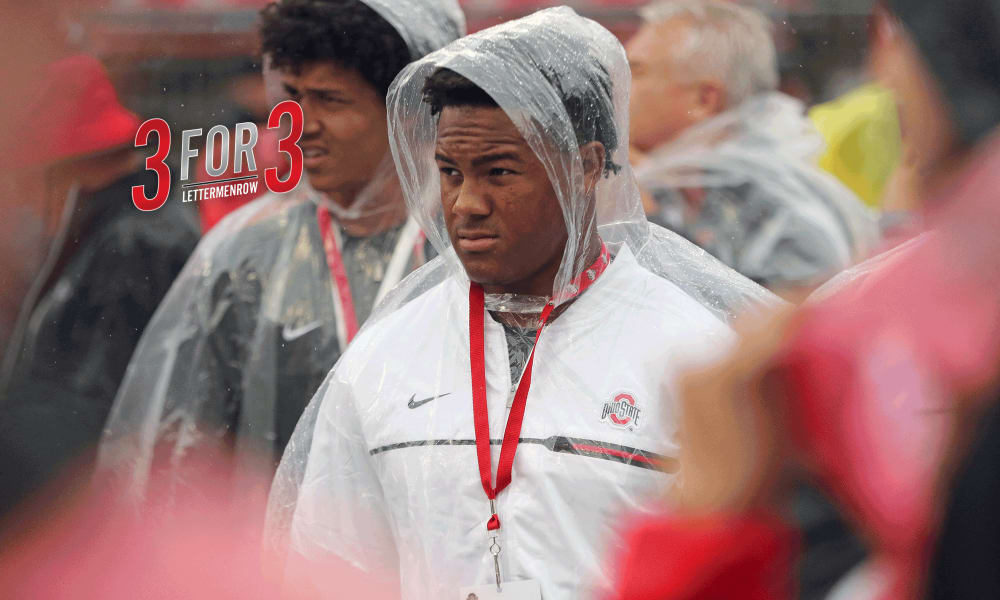 Wandale Robinson is less than a week away from making his college decision. (Birm/Lettermen Row)

There are a lot of great places to get Ohio State recruiting news. Lettermen Row brings the best Buckeyes analysts to one spot for a pressing question on the Buckeyes every Friday at 3:oo p.m. Check in weekly for thoughts from some of the country’s most respected college football recruiting analysts about all kinds of Ohio State-related questions. This week we’re discussing the pending decision from Wandale Robinson and what the Buckeyes should do if he picks another school.

Ohio State is just about five days away from learning if it has done enough for Frankfort (Ky.) Western Hills 4-star wide receiver Wandale Robinson to commit to the Buckeyes.

If you knew where this recruitment was three, four months ago, you’d marvel at the fact that Ohio State is even in the discussion here, let alone being a finalist — a legit finalist — for one of the country’s most explosive offensive weapons.

Robinson was offered by the Buckeyes over the summer but was never really made a priority for former receivers coach Zach Smith. Ohio State was looking at him as a return specialist/slot receiver and low numbers, combined with other targets prioritized by Smith, seemed to push Robinson to the backburner.

That has not been the case since the arrival of Brian Hartline as the Buckeyes wide receivers coach. Outside of recent commit Jameson Williams, Hartline has focused almost exclusively on Robinson in the Class of 2019 and it’s paid off for Ohio State. The country’s fourth-ranked all-purpose running back, a player shockingly similar to Purdue’s Rondale Moore in size and style, visited the Buckeyes on Sept. 8 and then made an official visit to Ohio State a month later.

He’s announcing his college decision on Nov. 1 and right now, this race is down to three schools: Ohio State, Kentucky and Nebraska. The Buckeyes are the big national power, Kentucky is the rising hometown school, and Nebraska is the one-time powerhouse looking for a superstar to deploy like Purdue has done with Moore to try and respark the program.

Ohio State will likely lose four of its top five receivers following the 2018 season and lack experience at the position heading into 2019 and beyond. Still, with numbers being tight, if Robinson says no, what do the Buckeyes do?

That’s the question asked today of our 3 for 3 guests, but today, we’re going all the way and turning it into a ful round table with three analysts from around the region joining me.

Let’s get to the answers.

If Ohio State misses on Wandale Robinson, do they stand pat at wide receiver or chase another in 2019?

There’s bound to be plenty of attrition following the season, especially when you consider the season K.J. Hill is putting together and the likelihood that he leaves early. Ohio State brought in a talented group for the 2018 class, but Kamryn Babb’s injury history is a bit of a concern at this point. I’d say that if things don’t go as planned for Wandale Robinson, Brian Hartline would at least try to find another wideout for the current class.

As far as who would be the most likely addition, that’s really anyone’s guess and honestly I could see a scenario where none of the other prospects bite and 2019 closes with Garrett Wilson and Jameson Williams. There are guys like Trey Knox, David Bell, and Milton Wright, but I don’t think things ever really took off there. The staff never loved Knox and he’s now committed to Arkansas, Bell seems destined for Penn State or Purdue, and I’m not even sure if there’s been any contact with Wright. They also could wait and see if a new hot name emerges, but my guess is they’d do a bit of searching before ending up with the solid pair that’s already in the fold.

I think they go after another receiver.

That unit is losing Parris Campbell, Terry McLaurin, and Johnnie Dixon. They very well could lose K.J. Hill, and both Austin Mack and Binjimen Victor (along with CJ Saunders) only have one year remaining. While the Buckeyes have recruited well behind them, adding a third receiver to this class would definitely make things a bit more comfortable when it comes to future depth, and growing the pool of talent that could contribute.

It is hard to look at the current wide receiver situation beyond Wandale Robinson and find a player that Ohio State leads for.

So in that sense, I think the safe bet would be that should the Buckeyes miss on Robinson, it could very well be the end of receiver recruiting in this cycle. Ohio State was never going to match one for one with incoming receivers in 2019 and out-going receivers this year to the NFL so I don’t think they will reach just to have a warm body fill some type of quota.

That said, this is Urban Meyer we’re talking about and he loves him some wide receivers so I suspect Ohio State would continue to look around the nation and see if anything pops up, particularly as the coaching carousel begins to spin here in the next few weeks.

I think Ohio State is going to sit tight and focus on 2020 if Wandale Robinson chooses Kentucky or, more likely, Nebraska.

I know the Buckeyes are going to be thin at wide receiver in 2019, but they’ll return Austin Mack, Binjimen Victor, Jaylen Harris, Chris Olave, Kamryn Babb, Jaelen Gill and others and I think that will be enough to win next season. While I certainly think the Buckeyes would like to add another big name in 2019, I don’t believe that there’s been enough time for Hartline and the coaching staff to develop a relationship with anyone other than Robinson that’s worth chasing, though I know there remains some discussion about Massillon (Ohio) Washington star Tre’Von Morgan still, but he’s a completely different style of player than Robinson.

In my mind, the prudent move is to hold off until 2020 and then really attack the best of the best like Julian Fleming, Rakim Jarrett, Marcus Rosemy, A.J. Henning, Gee Scott and others.