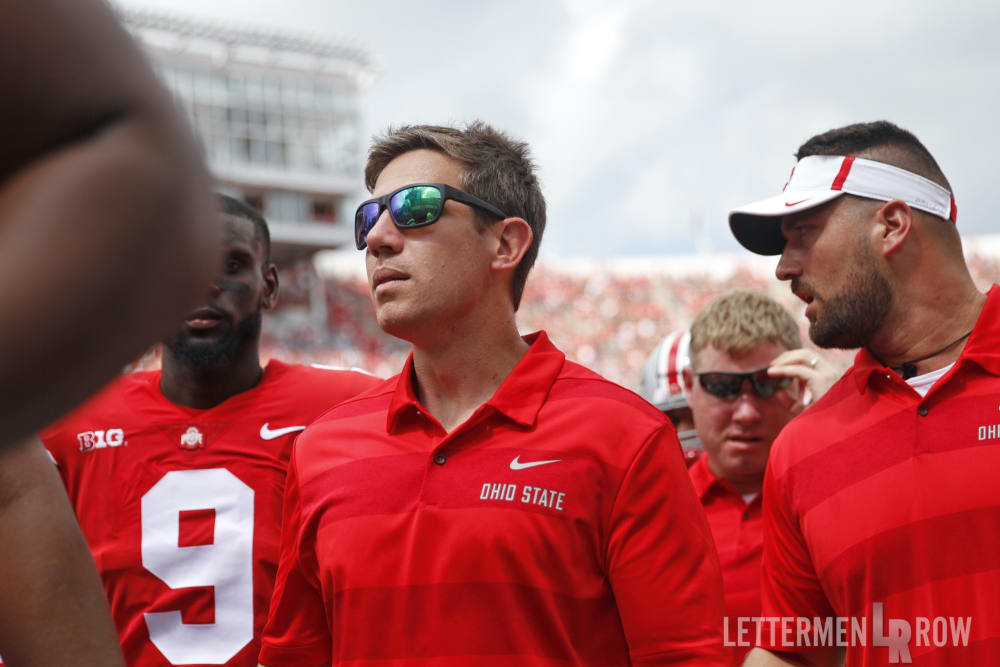 Have a question about Ohio State recruiting? This is the place for you, five days a week. Submit your questions on Twitter or on the Lettermen Row forums. Check in daily to see what’s on the mind of Buckeyes fans all over the country, like today as the discussion looks at the collective effort to keep Ohio State rolling without Urban Meyer.

In case you missed it: Urban Meyer is back at Ohio State and working once again toward the betterment of the football program.

Whether or not Meyer can coach on the sideline in the next two weeks, his presence inside of the Woody Hayes Athletic Center is a game-changer in a lot of ways for the program he’s built, especially on the recruiting trail.

No matter how you look at it, a month without Meyer is a hard pill to swallow for the Buckeyes. And that’s almost exactly what they’ve endured to this point. The fact that his administrative leave/suspension began on the same day as the most recent recruiting dead period was somewhat serendipitous, but the opportunities for real recruiting disaster during his absence were real and abundant.

Somehow, Ohio State made it through a month of swirling fog of rumor, innuendo and speculation by losing just one commitment. More than that, it somehow found a way to strengthen recruiting bonds among the 2019 and 2020 commitments. How does that happen? How did that happen? That’s the focus of today’s #RecruitingQuestionoftheDay.

Which assistant coaches have stepped up the most to keep the recruiting classes in 2019 and 2020 intact during Meyer’s absence?

To start answering this question, you’ve got to understand something important about Ohio State as a whole: It’s a player-driven program. It’s one of the few in the country that would’ve been capable of handling the last month as it did, because as a team, there are leaders at every turn. Guys within every position group have grown into leadership roles and as Greg Schiano said, “Kept the main thing, the main thing.”

That’s similar to the game of recruiting and was a key part of the last month for the Buckeyes. Of course there was a major role played by coaches like Ryan Day, Greg Schiano, Larry Johnson, Tony Alford, Bill Davis and Kevin Wilson. Of course new coaches Alex Grinch, Brian Hartline and Taver Johnson provided answers and insight for players and their families.

That is their job, and from all reports, the coaching staff went above and beyond at a difficult time not only to prepare the football team for the 2018 season without their leader, but carried that intensity and focus to the recruiting trail, talking to their commitments and top targets nearly every single day.

However, as a player-driven program, what Ohio State needed the most over the last month was for the recruits themselves to lead. Players like Garrett Wilson, Harry Miller, Jack Miller, Paris Johnson and Jake Wray all stepped up for their teammates and took the challenge of representing the Buckeyes in a tough time head on. In doing so, they helped calm the waters for the rest of their peers. That’s not to say the other commitments didn’t play a key role, because their level-headedness and maturity kept them from making any rash decisions when everyone would’ve accepted that, but that group of five played a major role.

Beyond that, there’s their leader: Mark Pantoni. In a player-driven program, the Director of Player Personnel is obviously pretty important. Pantoni’s ability to help identify not just the football players that Ohio State needs, but the people who fit the culture Meyer, strength guru Mickey Marotti and himself have built together has been paramount to riding out this storm.

I’ve written a number of times about how private, almost reclusive, a lot of the 2019 class is. But the 2020 group is the exact opposite. The ability to find and mesh both types of people/families has been key for Ohio State. Without the level-headed Pantoni setting the plan and seeing it executed, things may have gone entirely different. He’s a proven MVP for Meyer, and perhaps more than anyone, earned his stripes during a wild month.

There are no reactionaries among this crowd, whether it’s the shy class of 2019 or the outspoken and boisterous 2020 group. That’s because of Pantoni’s ability to bring not just the talented kids, but the right kids into the mix for the Buckeyes.