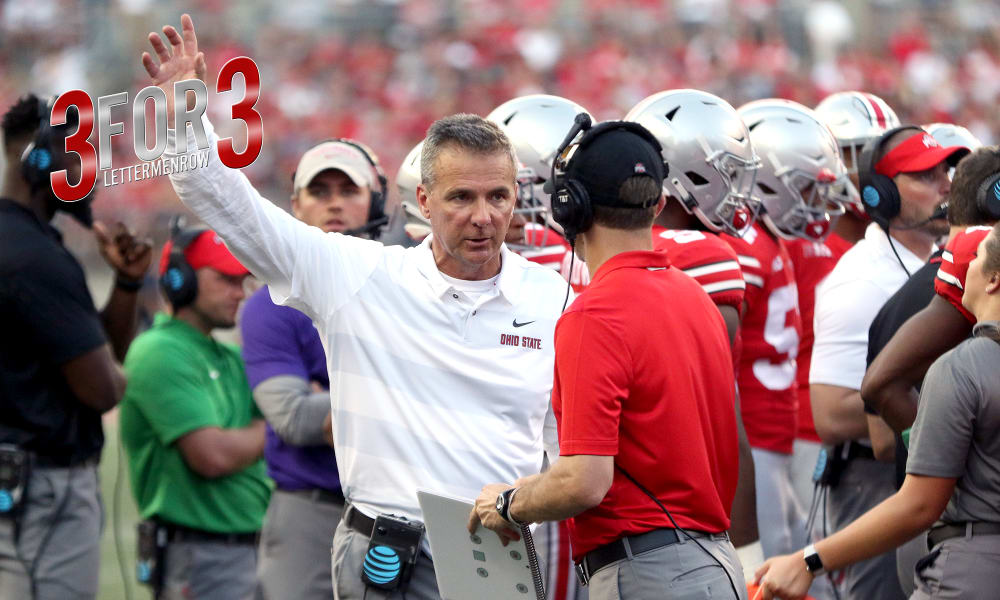 Urban Meyer's health has been a major topic of concern since September. (Birm/Lettermen Row)

There are a lot of great places to get Ohio State recruiting news. Lettermen Row brings the best Buckeyes analysts to one spot for a pressing question on the Buckeyes every Friday at 3:oo p.m. Check in weekly for thoughts from some of the country’s most respected college football recruiting analysts about all kinds of Ohio State-related questions. This week we’re focusing in on the uncomfortable discussion around Urban Meyer’s health and what it means for Ohio State recruiting.

The additions of Marcus Crowley and Jaxon Smith-Njigba provided, at least superficially, a much-needed win for the Buckeyes on the recruiting trail after a slow, often painful August, September and October.

Those months were hampered by rumors and innuendo around Urban Meyer’s future thanks to a three-game suspension levied by administrators at the school as a result of his inaction in regard to former wide receivers coach Zach Smith’s disciplinary issues.

Fast-forward two months, and it’s now a whole different set of issues plaguing Meyer and Ohio State on the recruiting trail. The focus has turned away from the idea that Meyer could be removed at Ohio State for disciplinary reasons and instead has turned to whether or not he steps away at season’s end as a result of his on-going medical concerns.

Meyer brought the issue into the spotlight at the end of October when he sat down with Lettermen Row, Cleveland.com and The Columbus Dispatch, feeling a need to address the rumors and shed a light on the severity of what he’s facing.

That brings us to the week’s 3 for 3, once again with the assistance of Andrew Ellis of elevenwarriors.com and Marc Givler of BuckeyeGrove.com, a part of the Rivals.com network.

I found it a bit baffling when Meyer came out and addressed his future with the team, and I certainly don’t think it’s helping on the recruiting front. We live in a world where opposing coaching staffs will do anything in their power to sway a kid from going elsewhere if necessary, so it’s never a good idea to give them any sort of ammunition. (And, yes, Ohio State does this as well.)

I realize he was asked about it, and perhaps the question truly caught him off guard at his presser, but I think he would have been better off just answering the question right then and there and then moving forward.

The follow-up interviews just brought even more unnecessary attention to the situation. We’ve seen teams (Penn State) do this before with Larry Johnson’s recruiting efforts (Tyreke Smith, Jayson Oweh) and it’s just one more thing to overcome. This isn’t the sole reason for the struggles, but it’s not helping things either.

The answer to this one is simple. Is your coach coming out to state emphatically that he is feeling great and can’t even imagine a world where he is not coaching at School X?

If the answer to that question is “no,” then you absolutely do not come forward and start fanning flames about your perceived health concerns.

You certainly don’t double down on the confusion by authorizing your doctor to chime in with a statement that didn’t exactly smooth things over with recruits. To be clear, I don’t believe Meyer’s intent was to cause confusion. I think, in his mind, he was probably being transparent and trying to clear things up about why there are rumors about his health and why he dropped to the ground on the sidelines earlier this season due to a headache.

But football recruiting is a cutthroat business and recruiting rivals will undoubtedly use this stuff to cast doubt in the minds of prospects and their parents on Meyer’s longevity. There is really never a good time to go down this road as a head football coach at a major program as there is really nothing to be gained from it. In fact, there’s a chance that the message doesn’t come across as intended, which appears to have happened here.

There is no doubt in my mind why Urban Meyer went on record talking about his health. This decision was one that couldn’t have come easy. But, I assume, Meyer felt it necessary to try and answer because the rumblings about his future were becoming an uproar and he had to say something.

But we’re talking about an intensely private guy, and I can’t think of a single thing he’d want to talk about less. Urban Meyer isn’t a guy that wants to stand in front of the media and admit to feeling sick, weak or whatever. He, better than anyone, understands how even the slightest crack in a program’s foundation can and will be exploited over and over again on the recruiting trail. I assume he just felt he had to try and quell that talk.

Unfortunately, I think the opposite happened, with Meyer validating the scuttlebutt being thrown in the direction of Ohio State commits and recruiting targets, giving opposing coaches and fans fodder to use against him and the Buckeyes.

The path to Hell, as they say, is often paved with good intentions. And I believe Meyer’s hope was to calm the concerns of recruits and their families by being forthright with his issues and saying he’s not going anywhere. But the inability to make that claim that without asterisks has only exacerbated Ohio State’s recruiting issues, especially when it comes to recruits like Jordan Battle and Zach Harrison. If there’s any chance that Meyer won’t be there for their careers, the chances of players like that pair coming to Ohio State shrink considerably.