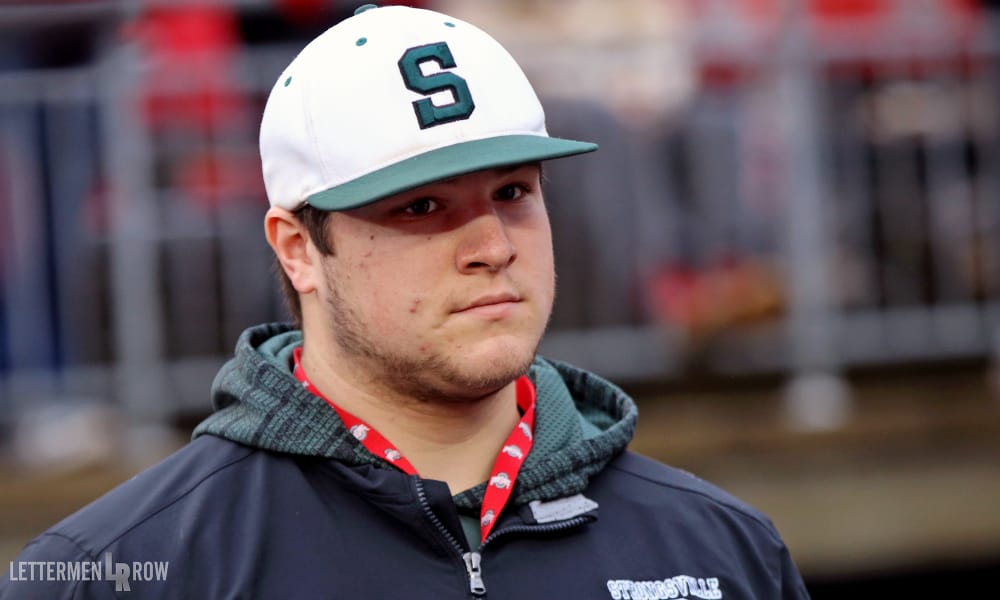 Ohio State has been working hard to flip Strongsville's J.D. Duplain, but has it done enough? (Birm/Lettermen Row)

Have a question about Ohio State recruiting? This is the place for you, five days a week. Submit your questions on Twitter or on the Lettermen Row forums. Check in daily to see what’s on the mind of Buckeyes fans all over the country. Today’s question asks about Ohio State and its chances to land four in-state targets committed that at one point were all committed elsewhere.

How’d the visits go for Jestin Jacobs, Tommy Eichenberg, JD Duplain and Cavon Butler what do you think our chances are for all four of these ohio products?

On Sunday night I tried to put forward what was best described as an immediate reaction to the weekend for the guys mentioned here. But now three days later, I think it’s justifiable to return to each of them and see if anything has shifted.

It’s been written here a bunch, but just because a player is from Ohio and Ohio State has offered doesn’t mean it’s a sure thing he’ll end up committing to the program — especially if it’s a late offer after a player has committed elsewhere. Yes, in most cases I think it ultimately turns out that way, but there are no guarantees in recruiting because as always the biggest factor is always comfort and relationships.

Three of the four players in question remain committed to other schools, and that’s definitely throwing a wrench into how these recruitments are playing out. If kids immediately decommitted after receiving an offer, I think the overall vibe around their recruitments would feel much more positive for Ohio State. But it’s 2018, and these kids have seen how the game is played.

They’re smart. They’re savvy. They know at this point, they have the leverage in the relationship with the Buckeyes, so there is absolutely no need to do public victory laps when getting an offer.

Jestin Jacobs made an unofficial visit to Ohio State but hasn’t yet planned a return for an official. (Birm/Lettermen Row)

Cavon Butler has to consider how to deal with the Kentucky coaching staff, which has recruited him longer and harder than Ohio State. The same thing can be said for Jestin Jacobs with Iowa and J.D. Duplain with Michigan State. The situations with Jacobs and Duplain are substantially different, though, because the Hawkeyes and Spartans are two programs notorious for not allowing their commitments to take other visits. And yet, each staff acquiesced this past weekend, knowing that drawing a hard line against would likely push their long-time commit in Ohio State’s direction.

I don’t like to do percentages when it comes to talking about recruiting because it’s an impossible science when dealing with the emotional vacillations of a high school senior. A player either is or isn’t going to pick Ohio State, but there’s no foolproof way to predict what happens or why. Instead, we focus on the indicators and how previous situations of similar circumstance played out. Usually that results in a player flipping to the Buckeyes if he’s from Ohio.

Every one of these players has been committed to another school, and only Cleveland St. Ignatius product Tommy Eichenberg has completely reopened his recruitment since landing an Ohio State offer. He’s going to decide between the Buckeyes and Michigan, and it’s very likely he’ll take an official visit to both schools. I tend to think, if all things remain equal, he will choose Ohio State. He’s been recruited the hardest out of this group of players and has had advocates inside the program pushing for him to receive an offer for months before he actually got it.

Cavon Butler has already visited Ohio State officially, and he took an unofficial visit in October as well. I am confident that if he handles his academic issues, he’s going to flip to the Buckeyes when he’s able.

Jestin Jacobs told Lettermen Row on Tuesday he’s not planned an official visit to Ohio State yet, but he’s likely to take one if asked.

There’s uncertainty around J.D. Duplain, who hosted Michigan State for in-home visits this week and hasn’t made a decision yet about an official visit.

This isn’t a matter of Ohio State not doing enough since they have offered these kids. It’s more about kids wondering if their previously established comfort and relationships are worth sacrificing for a chance to chase the dreams they’ve had most of their lives: Putting on a Buckeyes uniform and running out of the tunnel at the Horseshoe. The Buckeyes can’t be pushy here, because they don’t have the leverage.

It seems like that should be an easy decision, but it’s not.

Anytime Ohio State doesn’t land an in-state prospect that it has offered, it’s an upset. Because of that, the natural inclination is to think that each of these guys will Ohio State in the end. There are speed bumps along the way for each, though. Ohio State still has to navigate around the speculation that Urban Meyer is considering retirement, and if that happens, there’s sure to be uncertainty around Greg Studrawa and Billy Davis, who are recruiting Duplain and Eichenberg/Jacobs respectively.

Those questions make it difficult to confidently predict an outcome in what would usually be an open and shut case for four of Ohio’s best players.