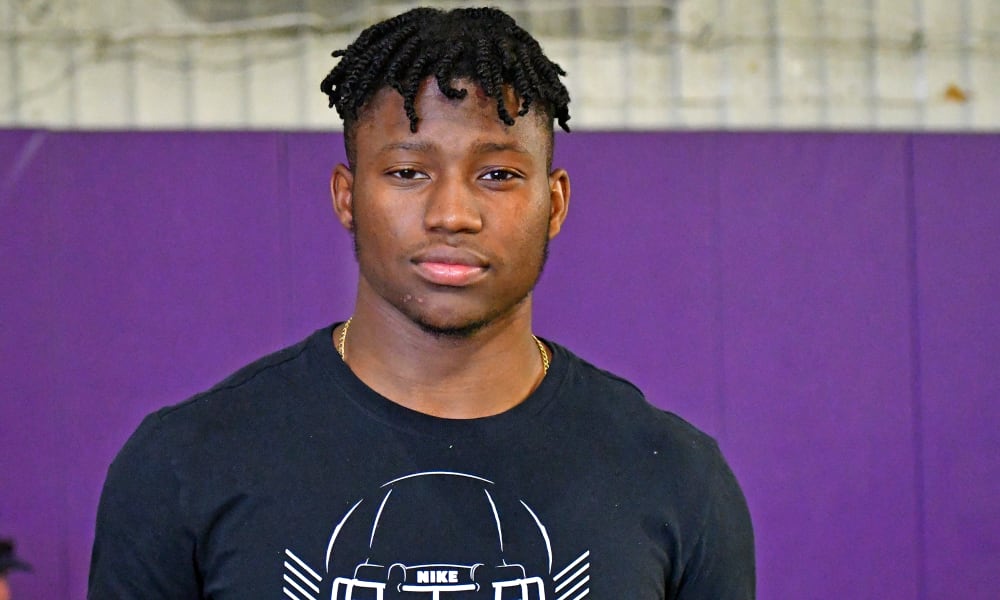 Noah Cain has been a Buckeyes target for a long time, but is he the best fit for Ohio State? (Sam Spiegelman/Courtesy)

Have a question about Ohio State recruiting? This is the place for you, five days a week. Submit your questions on Twitter or on the Lettermen Row forums. Check in daily to see what’s on the mind of Buckeyes fans all over the country. Today we’re examining two of the Buckeyes top running back targets in 2019.

Who fits our scheme better Cain or Crowley?

Let’s dive into it, but I’m going to take a slight liberty and include another running back making an official visit to Ohio State this weekend as well.

Two of the three targets at running back will be in Columbus this weekend, and I believe that Ohio State would love to have the position wrapped up soon, even before Noah Cain, the 4-star tailback from the IMG Academy in Bradenton, Fla., visits on Nov. 24.

The first one we’ll look at is Jacksonville (Fla.) Trinity Christian Academy’s Marcus Crowley. The list starters there because Crowley is visiting this weekend, and I feel confident saying he’s the running back of this group that Ohio State prefers the most. So my opinion aside, it seems he is the guy the Buckeyes think fits their scheme the best.

Frame-wise, Crowley is the tallest of this group, similar to the body-type of 2018 signees Master Teague and Brian Snead. He’s committed to Miami, and that means the Buckeyes will have to hit an absolute home run this weekend when he’s in town for his official visit.

Next up is Deondrick Glass from Katy, Texas, and the 4-star has been kind of an enigma for most of the recruiting year. Glass is the country’s 13th-ranked tailback and has a lot of offers from big-time programs, yet there’s been some talk around the recruiting world that he’s not been considered a take for most places. Why? That’s unclear and up to the schools.

With Glass, a powerfully built, 5-foot-11, 200-pound running back, a team is getting a kid from a major Texas powerhouse school, which means he’s battle-tested. He was the Offensive Player of the Year in his district as a junior and MVP of the district as a sophomore, so he’s been extremely productive, running for more than 4,000 yards in his first three seasons of high school. As a senior, he’s maintained that pace, already rushing for more than 1,500 yards and almost 200 yards per game.

I see a tough runner with big-time potential here, and the Buckeyes have been interested for a while now. The question is how high do they turn up the heat? Glass visited Oklahoma State for its big win over Texas last weekend, and the Cowboys are the front-runner for his services right now according to a number of people in that region. Ohio State and Alabama are both on deck for official visits, so we’ll know soon where he fits on the recruiting board of those two programs.

Finally, and perhaps more interestingly, is Noah Cain. In the early parts of this recruiting cycle, Cain was a player many people considered a real possibility for the Buckeyes. Then, Sampson James committed to Ohio State and Steele Chambers followed suit and it looked like there was no need for another running back.

But position coach Tony Alford and Cain remained in close contact, and the country’s sixth-ranked running back continued to play his recruitment out, knowing he’d like to make a decision in late December. That kept the door open for Ohio State even at this point. He’s expecting to make an official visit with the Buckeyes in late November, but there’s at least a small chance that won’t happen if Ohio State lands a commitment from either Crowley or Glass before then.

Cain will visit Texas this weekend, and for my money, it’s the Longhorns that have the best odds of landing him right now. I believe LSU — the school most people have slated him for — is comfortable with running back commitment Tyrion Davis and feels confident it will also land 5-star running back John Emery, a recent decommit from Georgia.

I see the 5-foot-11, 215-pound Cain as a Carlos Hyde-type of player, and obviously that’s a good fit for the old Ohio State offense. But the new style may be less focused on that big, power back-type.