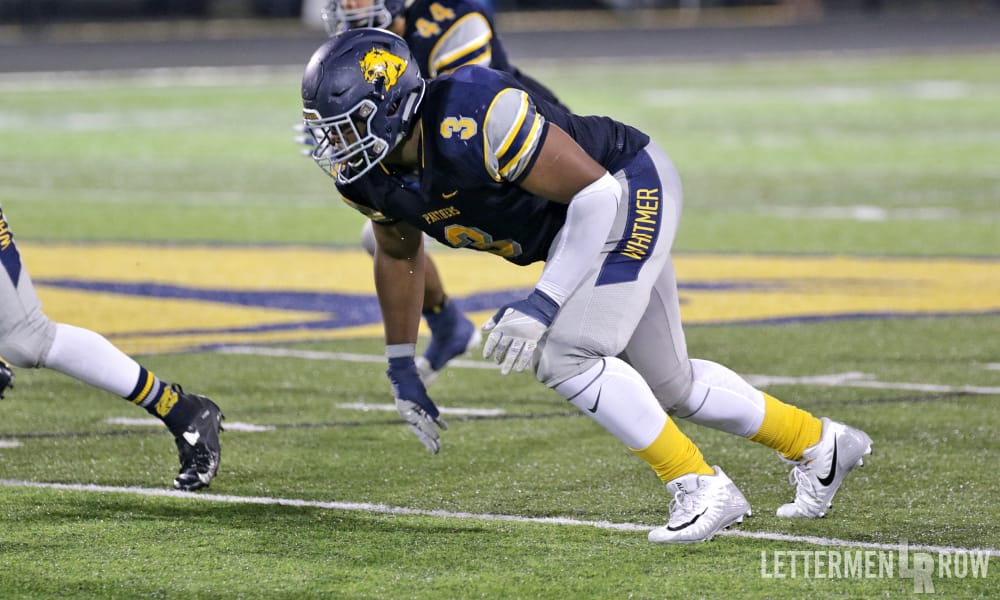 Have a question about Ohio State recruiting? This is the place for you, five days a week. Submit your questions on Twitter or on the Lettermen Row forums. Check in daily to see what’s on the mind of Buckeyes fans all over the country. Today we’re talking about what happens from here in the Buckeyes class of 2019.

Clearly this class appears to pale in comparison to Meyer’s most recent classes (based solely on recruiting rankings). Any chance they can still finish top 7, or at least #1 in B1G, despite losing Harrison to That Team?

First and foremost, even before the Urban Meyer news broke in August and well before the recent speculation about how his health could impact his future at Ohio State, the Class of 2019 wasn’t going to look as great as recent classes have. It’s a down year around the country, and Ohio State doesn’t have the same available numbers they’ve had in recent years because there aren’t as many surefire NFL draft picks leaving early.

But it is impossible to ignore the impact that Meyer’s suspension and the subsequent rumors of retirement because of health issues have played in recent months. To suggest otherwise, even without recruits publicly speaking about it, is intellectually dishonest.

For years, people have come to Ohio State because of Meyer. His track record and successes make him absolutely one of the best college football coaches of all-time. Right now, every school in America has found a crack to try to exploit, and many are doing it successfully. Just planting a seed of doubt about Meyer’s future and suggesting that Ohio State would fall apart without him is enough to cause hesitation and doubt in the minds of teenagers and their families.

The odds to land 5-star defensive end Zach Harrison are getting longer and longer, and a commitment to Michigan is probably coming in the near future.

Buckeyes 4-star defensive back commit Jordan Battle seems close to leaving the Ohio State class as his family appears to have concerns about Meyer’s longevity amid a serious Alabama push. Hell, even Doug Nester, the first commitment in Ohio State’s 2019 class, has visited Virginia Tech and Penn State this season.

But the show has to go on at Ohio State. And that means Meyer and Mark Pantoni, the leaders of the recruiting efforts, need to keep going. They can’t hang their heads and complain, and they’re not.

But this is a program that has been the standard for the Big Ten for the last 20 years and has produced the conference’s best recruiting class every year since Urban Meyer arrived. That’s probably not going to happen in 2019. It would take a major commitment or two to do that as Michigan closes in on Harrison and 5-star athlete Quavarious Couch as well.

So what does Ohio State do? If Battle does decommit, that moves the Buckeyes back to 14 players in the Class of 2019.

I think the Buckeyes will land Cavon Butler, a defensive lineman from Toledo Whitmer.

I still think Ohio State will be the destination for Tommy Eichenberg.

I believe Ohio State will flip Ole Miss commit Nick Broeker, who is expected to take an official visit to the school soon.

I think it’s still reasonable for Ohio State to flip the aforementioned Duplain from Michigan State, though it’s been more of a struggle than anticipated. I also think the Buckeyes may land D’Von Ellies, a 3-star defensive tackle from Maryland alongside Cavon Butler.

How exactly Ohio State finishes up in 2019, I have no idea. There are still a lot of moving parts, and new needs could emerge — like at defensive back if Battle flips. But I think Pantoni and Ohio State have earned their money and respect since 2011, and they’ll bring in the best class of players and people that they can. Maybe that sounds like fluff, but the program should celebrate the dudes that want to be Buckeyes, not lament the ones that don’t.