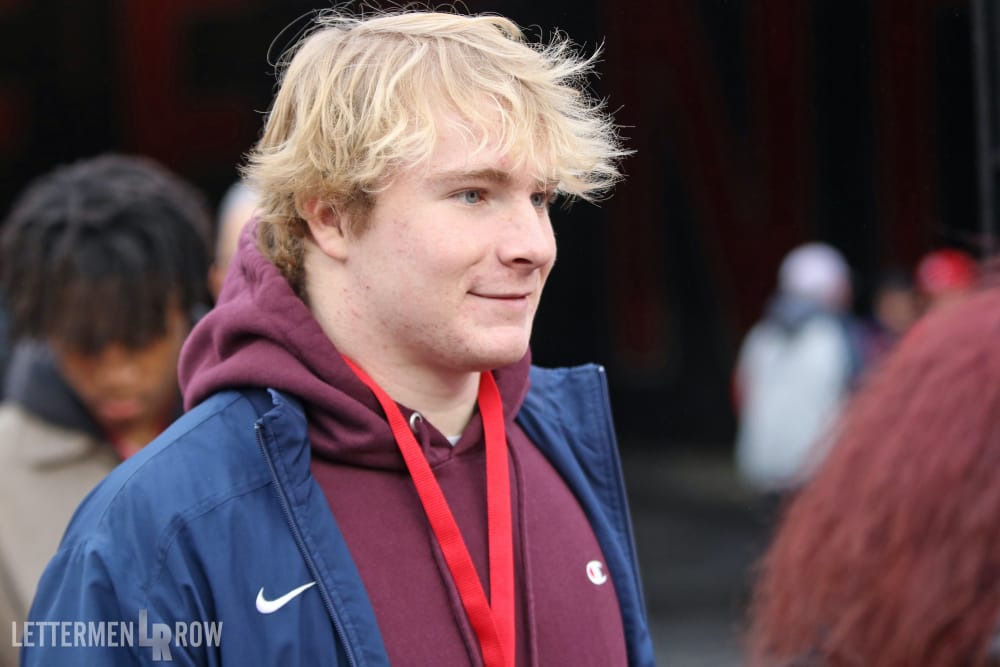 Tommy Eichenberg is one of the most important remaining targets for Ohio State in 2019. (Birm/Lettermen Row)

There are a lot of great places to get Ohio State recruiting news. Lettermen Row brings the best Buckeyes analysts to one spot for a pressing question on the Buckeyes every Friday at 3:oo p.m. Check in weekly for thoughts from some of the country’s most respected college football recruiting analysts about all kinds of Ohio State-related questions. This week we’re wondering how Ohio State will finish inside of the Buckeyes State’s borders.

There are currently 15 commitments in Ohio State’s 2019 recruiting class. Only Ryan Jacoby, Noah Potter and Cade Stover are from Ohio. That is, for the mathematically challenged, 20 percent of the recruiting class from inside of Ohio borders.

That’s not enough, as Urban Meyer has stated repeatedly.

“I think this recruiting calendar has really put us in a tough situation at times where we don’t have spring football in the state of Ohio — and a lot of it at times is projection,” Meyer said. “You see these just fantastic football players that people can say we missed on. And that’s true. But they commit so early.

“Some schools are coming offering 20, 25 Ohio guys right away. I kind of wish we could do that.”

The Buckeyes can’t do that, and they don’t. What they do well, though, is slowly evaluate the best players in the state. And then hope that when they’ve completed those evaluations, they can offer a scholarship and receive a commitment quickly from a player who is often committed to another out-of-state school that offered earlier.

Except for Zach Harrison, the 5-star defensive end from Lewis Center Olentangy Orange, that’s the route the Buckeyes have taken with the top remaining in-state targets in 2019. That group includes linebackers Tommy Eichenberg and Jestin Jacobs, offensive lineman J.D. Duplain and defensive lineman Cavon Butler. Each of those players visited Ohio State last weekend for The Game against Michigan. But Jacobs, Duplain and Butler still remain committed elsewhere — to Iowa, Michigan State and Kentucky, respectively.

If Ohio State hopes to finish off the 2019 recruiting cycle strong, it’s going to need Ohio prospects to do it. How many members of that five-man group will it land? That’s today’s question in the Lettermen Row 3 for 3, where recruiting analysts from around the beat chime in on Ohio State recruiting.

Once again, we’re joined by Andrew Ellis from Eleven Warriors and Marc Givler from Buckeye Grove, an affiliate on the Rivals.com network.

How many Ohio natives on the board will the Buckeyes land?

Like most others, I’ve had Butler and Eichenberg to Ohio State for several weeks now, and there’s nothing telling me to change that at this point. D’Von Ellies is another more-touted tackle who is being targeted, so I suppose if things were to move in a positive direction there then that could be bad news for Butler. For now, though, it looks like Penn State is the frontrunner for Ellies.

I think the Buckeyes are in a good spot for Jestin Jacobs, but they also need to get the official visit scheduled. J.D. Duplain made a surprise visit last weekend, and while that was somewhat telling, I don’t think he’s a slam dunk to Ohio State at this point. However, I do still have Urban Meyer winning out for both Jacobs and Duplain, so that takes us to four.

I’m also doing a 180-degree turn on Zach Harrison. I’m not sure how much of it is a direct result of The Game or how much stems from last week’s trip to campus, but it certainly feels like there’s a bit of a renewed confidence from the Ohio State side. I don’t think the kid has made his mind up yet, and there are still some important in-homes left on the itinerary, but I’m now thinking the good guys win out for the local five-star.

Let’s call it a clean sweep with the Buckeyes landing all five of the Ohioans.

Tough question today as a lot of these situations seem to be pretty tight right now but I will say they end up with three of the five.

I’m not sure I see a lock in the group of a kid who they definitely can’t get but those would be my best guesses today. Something about J.D. Duplain not flipping yet has me thinking he could be sticking with Michigan State and I just haven’t heard enough positive for Ohio State coming out of last Saturday’s visit to think they have totally turned things around on Jestin Jacobs. Ultimately I think Harrison’s relationship with Larry Johnson wins out, Eichenberg’s childhood affinity for Ohio State wins out and Butler gets the green light that I believe he is simply waiting for.

I do believe Ohio State ends up with Tommy Eichenberg, Jestin Jacobs, and Cavon Butler, though the races for each of those dudes have a different potential stumbling block.

With Eichenberg, I really think it comes down to the Buckeyes and the Wolverines, and his recruitment will hinge a lot on what happens with Urban Meyer and the rumors around his possible retirement. I suppose that can be said for each of these kids, but it seems like that’s a bigger concern when it comes to Zach Harrison and Eichenberg. I don’t think the other three would be sure bets by any stretch if Meyer were to retire, but I think the allure of playing at Ohio State may be big enough on its own, knowing the school would have an elite coach waiting in the wings if something crazy transpired.

There is a lot of unknown around J.D. Duplain but the more his recruitment drags on — after taking two visits to Ohio State in the last three weeks — the worse it feels for the Buckeyes. Earlier this week I felt fairly good that a flip would happen, but as of Friday, I feel less optimistic and actually believe he’s going to stay with Michigan State.

If Meyer can put to bed any concerns about his future, I think Ohio State is in really good shape with at least three of these guys and there’s some out there who have a renewed sense of optimism with Harrison, but I’m not feeling that myself at present. It’s not over, but an upcoming in-home visit with the Buckeyes will have to answer all the remaining questions if there’s any shot they pull off a five-for-five sweep here.

Right now, in my mind, Ohio State is going to go three for five.