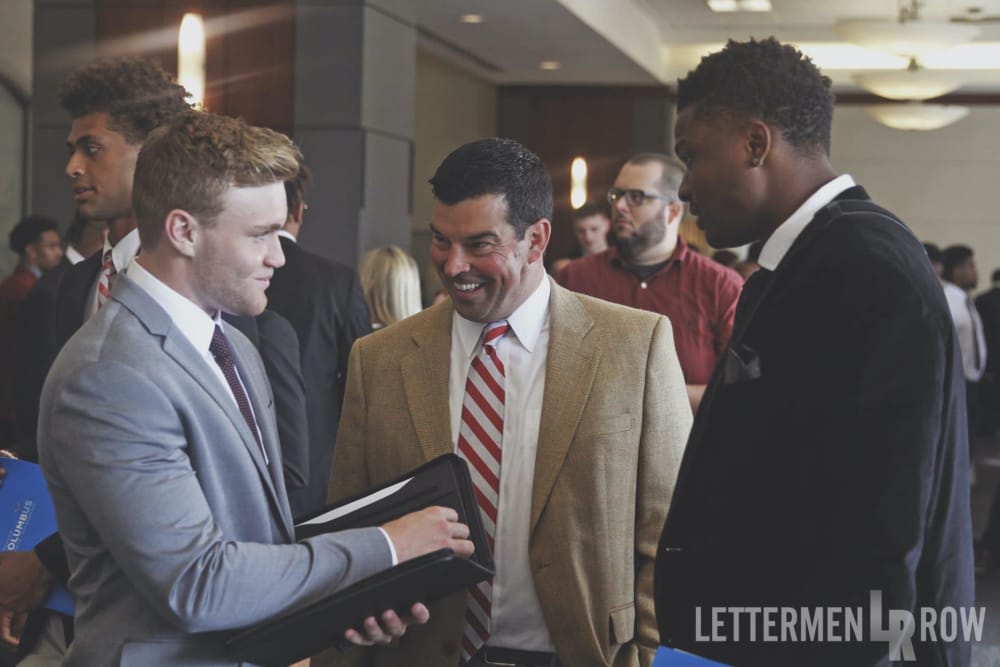 Ryan Day and the Buckeyes seem to have hit some bad luck on the recruiting trail since signing Tate Martell (left) in 2017. (Photo: Birm/Lettermen Row)

Today’s question comes from the Lettermen Row message forums, and is posited by user tphunk77:

So last year we saw debacle of Emory Jones and how that played out. We signed Baldwin who really was a last minute security blanket. This year we are seeing miss after miss. Ohio’s top QB prospect just signed with Missouri. Only 2 of top 25 QB prospects remain unsigned. Why are the Buckeyes struggling on landing a big QB recruit that past 2 cycles. Is it the depth of Haskins and Martell?

The Emory Jones “debacle” certainly put the Buckeyes in an interesting place a year ago, but I don’t know if that’s the adjective I’d use to describe it. Jones committed early and decided, as is his right, that he wanted to live out the recruiting process. He did so thinking that the Buckeyes – in need of a quarterback – wouldn’t find one to replace him or that they liked as much (or more) than him. Jones gambled on himself and lost that bet. Multiple people I’ve spoken with in the last few months have suggested Ohio State is quite comfortable with what they’ve seen out of the aforementioned Matthew Baldwin, despite the Austin, Texas star tearing his ACL in his final high school game last December.

Now why have the Buckeyes failed to attract a big-time quarterback to this point in 2019? I think there are a few reasonable explanations.

Fast forward to mid-June now that Burrow is gone. Ohio State made overtures toward Clemson transfer Hunter Johnson, but he opted for Northwestern because he apparently doesn’t think Haskins leaving for the NFL after the upcoming season is a realistic notion and didn’t want to compete with him for playing time in 2019. The reason they looked at Johnson?

It’s really hard to develop relationships with a quarterback this late in the recruiting process.

That put the Buckeyes way behind the proverbial eight-ball when it came to forging bonds with kids like Graham Mertz and Bo Nix, who in my mind are the only elite-level quarterbacks in the 2019 class.

Now the need for a quarterback is apparent and it will be easier for the Ohio State staff to show that to potential targets, but it also requires going all in on a guy that they may not have really evaluated to this point. It’s sort of a Catch-22 situation.

Do you take a guy who you’re not convinced can play in your program because you need one or do you keep recruiting the guys that you’ve recruited the hardest to this point and hope something breaks in your favor?

I suspect we’re not that far from finding out.