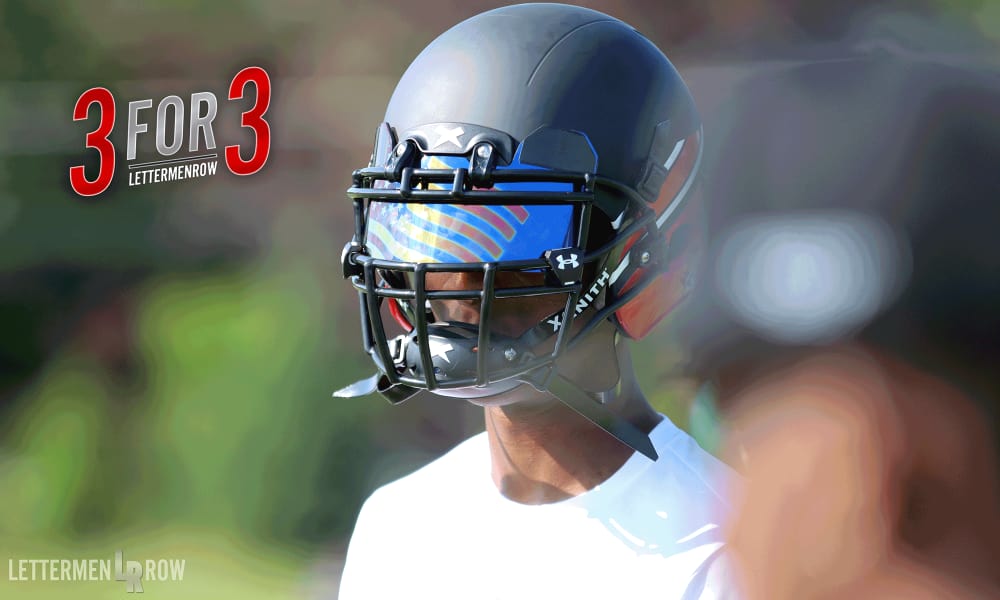 Dwan Mathis is solid to Ohio State, but the Buckeyes quarterback depth is a concern for 2019 and beyond. (Birm/Lettermen Row)

There are a lot of great places to get Ohio State recruiting news. Lettermen Row brings the best Buckeyes analysts to one spot for a pressing question on the Buckeyes every Friday at 3:oo p.m. Check in weekly for thoughts from some of the country’s most respected college football recruiting analysts about all kinds of Ohio State-related questions. This week we’re addressing the quarterback position and whether or not it’d be prudent for Ohio State to add another before 2019.

Let’s just throw it out there so that we’re all on the same page, OK?

It’s pretty darn likely that Ohio State is going to enter the 2019 football season without Dwayne Haskins. Yes, it’s kind of a shame Buckeyes fans only had one year to watch his talent, but his game is going to flourish in the NFL and it’s hard to imagine him as anything but a first-round pick.

You can’t expect him to say no to that, even if a return to Ohio State could bump him into the discussion as a top-5 pick in the 2020 NFL Draft.

So, Ohio State will be tasked with replacing Haskins as the starter next season. That means a full-on competition come spring between Tate Martell and Matthew Baldwin. Behind that pair will be Oak Park, Mich., freshman Dwan Mathis, who is expected to enroll with the Buckeyes in January. West Virginia transfer Chris Chugonov and preferred walk-on Kory Curtis will round out the position.

But as this past spring showed us, anything can happen when a talented quarterback begins to think he may not win the starting job. Joe Burrow’s transfer put the Buckeyes in a short-handed position for 2018, which led to the last-minute addition of Chugonov at the start of fall camp.

What happens if Tate Martell or Matthew Baldwin decide to transfer if the other takes the starting job? Should the Buckeyes hedge their bets and see if there’s another 2019 quarterback available?

That’s today’s Lettermen Row 3 for 3 question. We’re once again assisted by Andrew Ellis of elevenwarriors.com and Marc Givler from the Rivals.com network and BuckeyeGrove.com.

How should Ohio State recruit at quarterback?

Like many others, I am of the belief that Dwayne Haskins will elect to go pro following his redshirt sophomore season. However, I’ve seen plenty of NFL Draft pundits advising that he stick around for one more year to further develop his craft. The next several months will tell the tale, but for now I’ll operate under the assumption that this will be his lone season as Ohio State’s starting quarterback.

I’m pretty high on Matthew Baldwin and Tate Martell, so my decision would be to wait until 2020 and try to find another quarterback to go along with Jack Miller. The Buckeyes looked far and wide before flipping Dwan Mathis and there’s really no other 2019 quarterback (besides Wisconsin commit Graham Mertz) that I’m particularly fond of. Miller is one of the best in the country and they’ll continue to recruit Minneapolis’ dual-threat Jalen Suggs even though he may end up on the hardwood. 2019 isn’t a great quarterback class and there’s plenty of time to find another for 2020, so I think that’s the best bet even if they do find out that Haskins plans on bolting.

I’m just not much of a fan of trying to squeeze an extra body into the class in 2019 at just about any position.

2020 is so much better nationally that you have not only more talented options but a longer time to evaluate and build relationships. I know that could put them in a tight situation next fall if Haskins goes pro, but we just watched them struggle for months to find a quarterback they really liked in 2019 and now we’re going to ask them to try and find a second one?

I just don’t think I can get on board with that.

With Baldwin coming back from a knee injury, you shouldn’t be in any worse shape next year than this year from a depth standpoint and could be better actually, so I would definitely look to 2020 unless by some miracle a player like Graham Mertz is available and all indications are that he is not.

The truth is, finding any quarterback in 2019 has been a difficult task. So the idea of chasing down another isn’t exactly met with optimism. Graham Mertz isn’t flipping from Wisconsin. Ryan Hilinski, if he were to decommit from South Carolina, likely only does so if he can get into Stanford. I don’t think Sam Howell and Ohio State are a match, though the Florida State verbal has been discussed as a guy that could flip to North Carolina, so maybe he’s not entirely happy with what he sees in Tallahassee.

It is hard to convince two top-ranked, high-talent quarterbacks from the same class to go to the same school. That’s just the way it is, and it makes sense, of course. Guys want to be the man in their class.

That’s why, as I sit here today, I think the best play for the Buckeyes to insulate themselves against a potential roster shakeup is to try and find a transfer to add. It’s been recently announced that Utah’s Jack Tuttle will leave the Utes, and I see him as a player that could be a great fit for the Buckeyes offensively.

We’ve entered a new world when it comes to college football’s roster management, and while Ohio State would certainly prefer that the roster is made up of the guys that are currently on it, I think it’s wise to prepare for the future. To me, that means sending out a feeler to Tuttle. And if he’s not interested, aggressively pursuing a second quarterback in 2020 to complement Jack Miller.