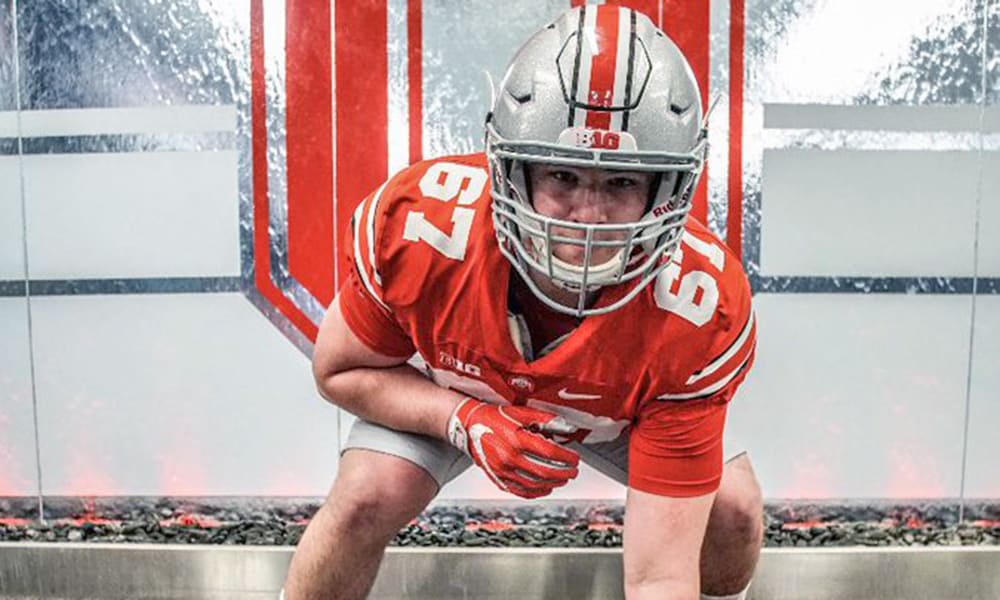 There are a lot of great places to get Ohio State recruiting news. Lettermen Row brings the best Buckeyes analysts to one spot for a pressing question on the Buckeyes every Friday at 3:oo p.m. Check in weekly for thoughts from some of the country’s most respected college football recruiting analysts about all kinds of Ohio State-related questions. This week we’re examining the odds of Ohio State landing another offensive lineman or two in the Class of 2019.

Ohio State’s first two commitments in the Class of 2019 were offensive linemen. Huntington (W.V.) 4-star Doug Nester kick-started the class in July of 2017, and he was joined by Mentor (Ohio) 4-star prospect Ryan Jacoby in March.

The Buckeyes added 5-star center Harry Miller in June, which was a key addition to the program and player that could be the centerpiece of the offensive line for years to come — both literally and figuratively.

But there’s a need for more offensive linemen, clearly, and Ohio State has tried to address it throughout the last few months to no avail. With just about a month until the early signing day, the Buckeyes are in an unenviable position: Their top two most likely candidates to join the class of 2019 are committed elsewhere. Sure, there are guys out there like 5-star offensive tackle Darnell Wright, but it just seems very unlikely that he makes Ohio State his college choice.

So what about the guys that could be a realistic option? What happens from here?

That brings us to the week’s 3 for 3, once again with the assistance of Andrew Ellis of elevenwarriors.com and Marc Givler of BuckeyeGrove.com, a part of the Rivals.com network.

Yes, Ohio State will add to the 2019 offensive line haul, and right now my guess is that there will be two additions by the time signing day rolls around. Offensive tackle remains a pretty big need — though it is slightly alleviated by Paris Johnson Jr. and Jake Wray already being on board for 2020 — and I’ve got Ole Miss commit Nick Broeker penciled in for the time being. The other most likely addition is probably Michigan State commit J.D. Duplain, but neither one of them are anything close to being locks.

I know Broeker’s playoff schedule made visiting Columbus (or anywhere else) a bit tricky for him, so now that things are a bit less chaotic it will be imperative for the Buckeyes to get him on campus. At last check it was sounding like he wanted to sign early in December but wait until the summer to enroll, which means the Ohio State staff will have limited time to pull off the flip. After failing to make much progress with another Ohioan committed to the Spartans (Mentor guard Nick Samac), it does appear that the odds are better for Duplain.

That would be two solid additions to the trio that’s already in the fold, but visit plans still need to be finalized. If the pair is in town for the Michigan game then that would be a major step in the right direction.

Ohio State has to take another offensive lineman in this 2019 class.

Even with slim options at this point, the Buckeyes need to take one for depth purposes and preferably a tackle body. Nick Broeker seems like the best bet right now and if he goes through with a visit during the weekend of the Michigan game I think there is a solid chance the Buckeyes could flip him at that time.

I think ideally they’d find two more offensive linemen that they can get and that they really like but finding more prospects that fit both of those criteria seems to be a challenge at this point. I’m not particularly bullish on the chances of flipping J.D. Duplain at this point, though they are still plugging away there. In short, I think they’ll end up flipping Broeker and that the safe bet would be on just one more offensive lineman to fill this class out. The caveat here, however, is that the coaching carousel is just getting fired up and coaches leaving other programs could certainly bring new targets into play.

I agree on both counts, though I’m certainly a touch skeptical about the odds of landing Duplain, at least when it compares to the odds of flipping Broeker from Ole Miss. To this point, neither player has visited Ohio State, which hurts the ol’ confidence meter. But it seems, at least superficially, that Broeker is much more willing to consider his future publicly.

Maybe that’s a byproduct of his commitment being to an SEC team rather than an Ohio State rival, as Duplain is. The Buckeyes are still working hard to land Duplain, but he’s visited Michigan State twice since his Ohio State offer came his way and hasn’t publicly revealed a decision to visit Columbus.

If he does, it could set his Michigan State commitment on fire, so it makes sense for him to be playing it close to the vest.

I think Urban Meyer and Ohio State will land each of these players, but there’s a battle coming for each.