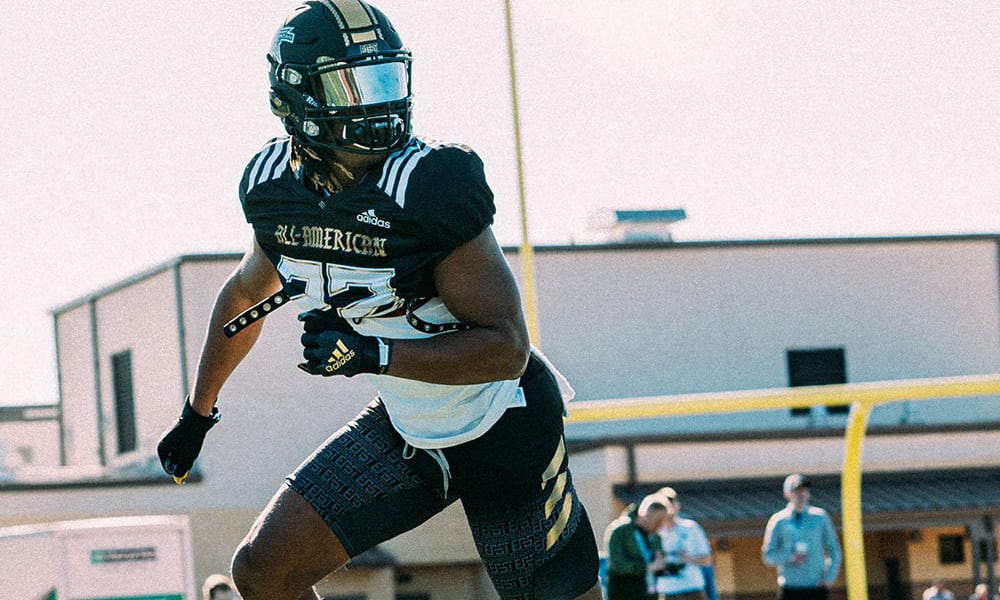 Jahmyr Gibbs put his talent on display at the All-American Game in San Antonio. (Jahmyr Gibbs/Twitter)

Have a question about Ohio State recruiting? This is the place for you, five days a week. Submit your questions on Twitter or on the Lettermen Row forums. Check-in daily to see what’s on the mind of Buckeyes fans all over the country. Thursday, Lettermen Row takes a look at the expected official visit of 4-star running back Jahmyr Gibbs who is scheduled to be in Columbus over the Jan. 17 weekend.

With all the smoke and rumors surrounding Jahmyr Gibbs and OSU, are the chances increasing he will end up in Columbus?

After months of wondering and pondering and worrying and obsessing, the end is almost near.

The end of the Great American Tragedy known as Ohio State running back recruiting in the Class of 2020, though at times the topsy-turvy nature of this cycle has felt more comedy than tragedy.

The Buckeyes are roughly 36 hours or so away from a scheduled visit from Dalton (Ga.) 4-star running back Jahmyr Gibbs. If the official visit occurs it will put a bow on the recruiting efforts at running back in this cycle, no matter what the resulting outcome.

If you watched Ryan Day’s midweek press conference on Wednesday, you may have noticed that the Ohio State head coach didn’t speak too positively about the odds of the Buckeyes adding another running back, or the need to, in the class. He did though leave a little wiggle room in his speech, more evidence that he’s becoming a skilled wordsmith at the podium when he needs to.

“The numbers are pretty tight right now. So probably not,” Day replied when asked if they’d add another running back in 2020. “But we’ll kind of see how things go.”

Don’t be fooled into thinking that Day’s pragmatic approach to the upcoming Gibbs visit is a sign of apathy. It makes sense to believe that Ohio State wants to add another running back or they’d not be open to welcoming the dynamic Georgia Tech commitment into town. If he makes the visit, it matters. The numbers are tight, but numbers at this point are merely a suggestion. If the Buckeyes want to add another back and Gibbs reciprocates that feeling, they’d move on him.

But the wheels are turning in his recruitment and things can change on the drop of a dime. Until he actually arrives on campus, it’s hard to even know for sure that the intensely private Gibbs is actually even going to visit. His plans have changed multiple times in the past, it’s conceivable they could change again.

LSU and Florida are expected to also receive official visits. Georgia Tech may seem like an underdog when it is put into a battle royale with the Buckeyes, Gators and national champions Tigers, but the belief is — and has been — that the most likely outcome in this recruitment is Gibbs sticking with the Yellow Jackets.

The odds are not in Ohio State’s favor at this point but there are few schools in the country with gravitas and momentum on par with the Buckeyes. If Gibbs makes it to town, Ryan Day, Tony Alford and the entire focus of the Ohio State program will be on him and his family this weekend. That is a very similar situation to what occurred when C.J. Stroud took his official visit over the weekend of Dec. 14 and that turned out well for Ohio State.

The Buckeyes have a special opportunity for an incoming running back and if they get to present that to Gibbs this weekend it will be in a manner that no other program he’s planning to visit will be able to measure up to. Will that be enough to convince him that leaving home for three or four years in Ohio is worth the risk? Will they even take the shot?

Continue Reading
You may also like...
Related Topics:Featured, jahmyr gibbs