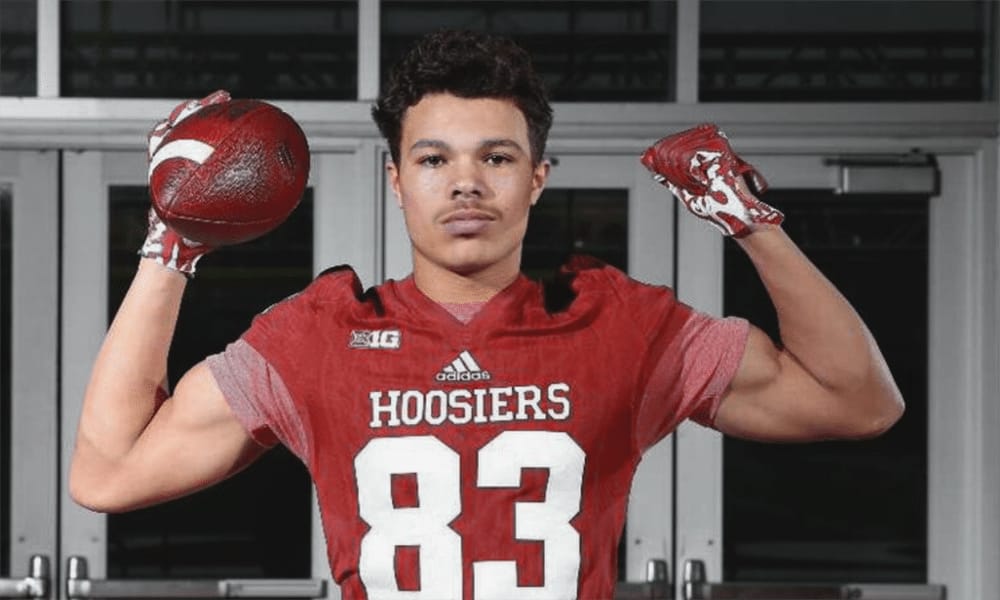 Ohio State 2019 tight end target Erick All during a visit to Indiana. (Photo via Twitter/Erick All)

Do you think Ohio State offers Erick All?

On Tuesday, Ohio State offered Parkersburg (W.V.) 2019 tight end Brenton Strange following his performance at the Buckeyes second one-day camp of the summer. Strange, 6-foot-4 and 210-pounds, has developed into a hot commodity on the recruiting trail in recent weeks with North Carolina, Cincinnati and Wake Forest stepping up alongside Ohio Stat to throw hats into his recruitment.

The Buckeyes will take a tight end – at least one – in the Class of 2019. And the offer to Strange vaults him to the top of the potential list, in my humble opinion. If there is a potential fly in that ointment, I think it would be Fairfield, Ohio tight end Erick All.

The country’s No. 28-ranked tight end, All has some big offers, including Michigan, Notre Dame, Iowa and Michigan State. He’s a talented player with a college-ready, 6-foot-4, 225-pound frame, and he’s a kid that the Buckeyes have been eyeing up for the last year. The evaluation process began while they were recruiting his former teammate and current Clemson Tigers freshman Jackson Carman.

All will camp with the Buckeyes on Saturday and is expected to visit Michigan on Monday for camp in Ann Arbor. For Ohio State to extend an offer to All, it all comes down to one simple question.

“Are you better than Brenton Strange was earlier in the week?”

All will come in with a better frame, but the questions will be about his explosiveness at the line of scrimmage, his abilities as a receiver and his work ethic. Will he be able to outwork Strange in those areas and show that he is the guy the Buckeyes need at tight end? That’s the answer Ohio State will be looking to find.

Continue Reading
You may also like...
Related Topics:Featured, Ohio State, Buckeyes, stay crootin, erick all, recruiting question of the day