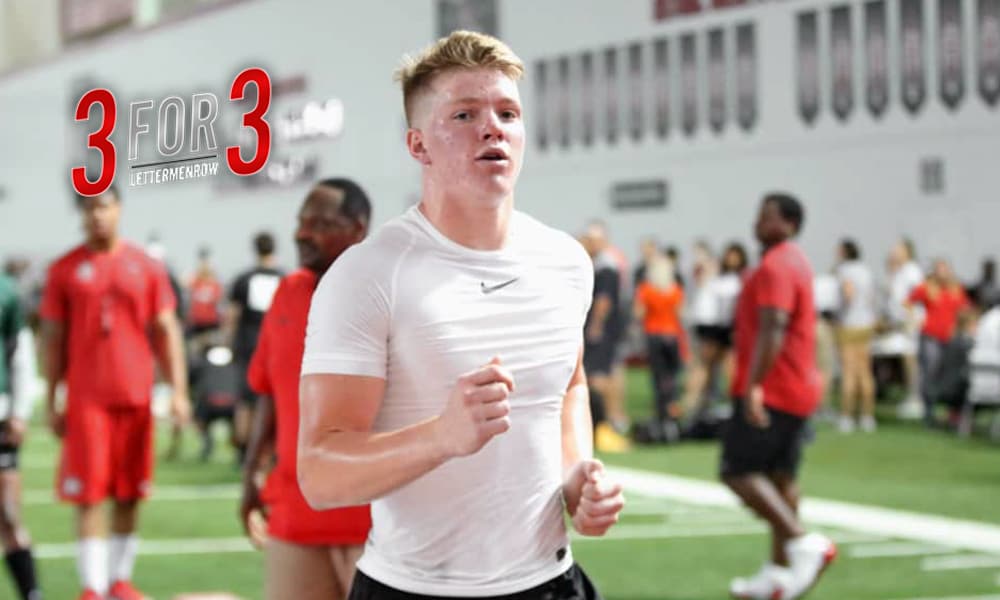 Jack Sawyer is considering Ohio State and Penn State and will be in Happy Valley. (Birm/Lettermen Row)

There are a lot of great places to get Ohio State recruiting news. Lettermen Row brings the best Buckeyes analysts to one spot for a pressing question on the Buckeyes every Friday at 3:oo p.m. Check in weekly for thoughts from some of the country’s most respected college football recruiting analysts about all kinds of Ohio State-related questions. This week we’ll talk about how important the upcoming trip to Penn State is for Ohio State on the recruiting front.

The Buckeyes are playing in one of the season’s biggest games on Saturday night, traveling east to Happy Valley, where they’ll try to knock off No. 9 Penn State.

Whatever the result of Saturday’s game, there is another game being played between these two programs — it’s a much longer one on the recruiting trial.

Ohio State and Penn State have had a number of head-to-head battles in recent years. And if the on-field rivalry continues to blossom, it’s only going to happen more frequently. This weekend, the Nittany Lions are going to host many dozens of the country’s highest-profile recruits, and a number of them have an interest not just in Penn State, but also in the Buckeyes.

Rarely does the outcome of one game carry much weight in a recruitment, but this rivalry seems to be taking on a life of its own. Another Penn State victory could lead many to believe that a turning of the tide in the Big Ten is occurring.

Ohio State and Penn State have become rivals on the field and in the living rooms, how much does this weekend’s game impact the recruitments of guys like Zach Harrison, Bryan Bresee, Jack Sawyer, etc. in your mind?

It’s worth watching any time a school like Penn State or Ohio State gets talented prospects on campus, but I’m of the belief that these things get blown out of proportion. Strengthening the relationship with coaching staffs, players, and fellow prospects is one of the more important aspects of the recruiting game, so in that sense, it’s a pretty big deal whether it’s for Penn State and Ohio State or a contest against a MAC opponent. Comfort and relationships continue to be the keys in recruiting and you have to get kids on campus to really address those areas.

On the other hand, some folks seem to put too much stock into the results of the game, which in my opinion matters very little in the long haul. The Buckeyes and Nittany Lions are both established programs and a head-to-head victory is never going to set one above the other. There’s just so much more that goes into the process for anyone looking into a school regardless of whether they have three stars or five stars next to their names.

Zach Harrison has made it abundantly clear that the recruiting process is rather annoying and tedious for him. It’s just tough to imagine one game is going to make all that much of a difference for him, Bresee, or any other player the two programs are fighting over.

I think it is always interesting when two big-time programs square up with a lot of kids that both teams are recruiting on campus.

Ultimately these kids do not make rash decisions off of one game. However, there is an opportunity for each team to validate positive things that these kids see in these programs. So for these defensive linemen there, it could certainly help Ohio State if the defensive line comes in and dominates in a hostile road environment. These guys already have good thoughts about Larry Johnson and his development, but that can just validate those thoughts and help push things their way.

The narrative of which program is the top dog in the Big Ten East is also at stake on Saturday night as these two programs have played some very big games against each other over the years. These are little things that can add up in the grand scheme of a long-term recruitment.

But it’s impossible to think that a player interested in Ohio State and Penn State wouldn’t be influenced at least a little bit by the outcome. Not necessarily because it’s one game, but because it’s sort of the rubber match in what’s become a very intriguing three-game series.

Zach Harrison is going to be awed by this atmosphere in Happy Valley. He’s obviously very interested in both teams, and potentially getting validation that the Nittany Lions are on the same level as the Buckeyes may make the idea of matriculating there a bit easier. James Franklin is a world-class salesman and will not be shy about promoting that kind of success against Ohio State. There are a number of players in a similar position.

If Ohio State is able to go into Beaver Stadium, shut down the Nittany Lions and shut up the crowd there, it will be an impressive display of strength for a program that wants to prove it is still the only option in the Midwest for a player wanting a shot at a national title.

This game matters, more than most when it comes to recruiting. That’s how I see it.