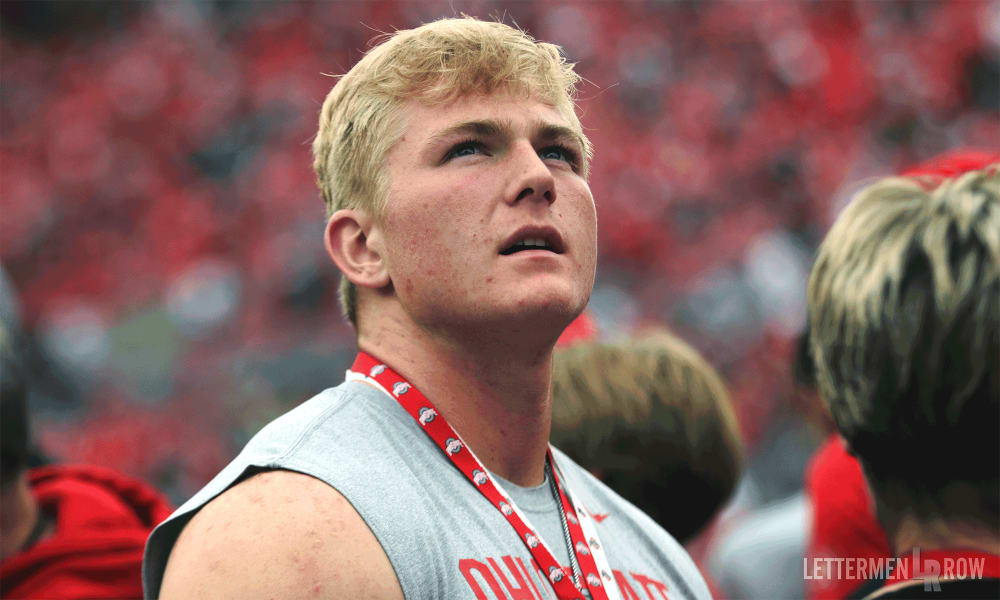 Harry Miller is a 5-star prospect for Ohio State in 2019, but it needs more offensive linemen. (Birm/Lettermen Row)

Have a question about Ohio State recruiting? This is the place for you, five days a week. Submit your questions on Twitter or on the Lettermen Row forums. Check in daily to see what’s on the mind of Buckeyes fans all over the country. Today, that is the offensive line and the recruiting priorities in the Class of 2019 at that position.

In case you were unaware of why I’ve decided to include the date in this introduction, let me bring you up to speed. Today is an important day in the United States of America.

Now you’re probably wondering why am I even spending time writing this Recruiting Question of the Day when I should be out eating tacos — and so should you. Heck, if everyone is eating tacos, will anyone even read this? I don’t know, but that’s a chance I’m willing to take because if there’s one thing I do love more than tacos, it’s you recruiting freaks who are reading this right now.

We’re in this together.

Anyway here’s today’s question, which was asked in a round-about manner by a few folks on Twitter.

How does the Oline recruiting finish out?

The offensive line, the backbone of any good offense, remains a concern when it comes to Ohio State and the 2019 recruiting class.

As it stands today, the Buckeyes have three commitments at the position, with no prototypical tackle among them. Yes, Harry Miller, Doug Nester and Ryan Jacoby are three very good prospects, but there’s absolutely a need for at least two more offensive linemen in this class if you’re asking me.

What’s crazy about this as I see it? Nester and Jacoby were the first two commitments in the entire 2019 class for Ohio State, so the idea that a great offensive line haul was coming began to swirl — and did so with good reason.

But things slowed down and Ohio State fell short on a guy from Florida who visited four times in a four-month stretch when Michael Tarquin committed to Miami. The Buckeyes lost momentum for some reason or another on 5-star offensive tackles Devontae Dobbs and Darnell Wright and never seemed able to gain it back, and they couldn’t gain traction with fast-rising prospects like Xavier Truss and Walter Rouse. They also failed to win the relationship game with tackles like Quinn Carroll, John Olmstead and Andrew Kristofic, each of whom picked Notre Dame over the Buckeyes.

The Buckeyes will host offensive tackle Trevor Keegan for an official visit this weekend against Indiana, but they’ve been somewhat reluctant to go all in for him to this point. Perhaps that changes with a little personal, face-to-face time.

Jacoby could play tackle, but I am not 100-percent sure that’s where he ends up in college, even if it’s where he begins. Nester was at one time listed there, but he’s now regarded by everyone as a guard, which is what I think Ohio State saw him as all along. Harry Miller is the country’s best center prospect in my opinion, so the interior of the line is pretty close to set.

It’s the ability to move Jacoby around that is leading to the Buckeyes offering other guards, including two Ohio prospects in Nick Samac and J.D. Duplain, each of whom are committed to Michigan State. I don’t think Samac will seriously consider Ohio State barring an absolutely epic meltdown in East Lansing. But I do believe Duplain is considering a flip to the Buckeyes and wouldn’t be surprised if it happened within the next few weeks.

Outside of Duplain, there remains a number of questions. If there’s a national-level player out there that still bears watching, it may be Virginia’s Jakai Moore, but I still think he ends up at Penn State. Recently-offered Ole Miss commitment Nick Broeker is a player I expect to visit at some point, and I think Ohio State could take him from the Rebels. But how much of a priority the Buckeyes make him in the next few weeks will determine that I think.

Bottom line? There are questions aplenty and still not a lot of answers.