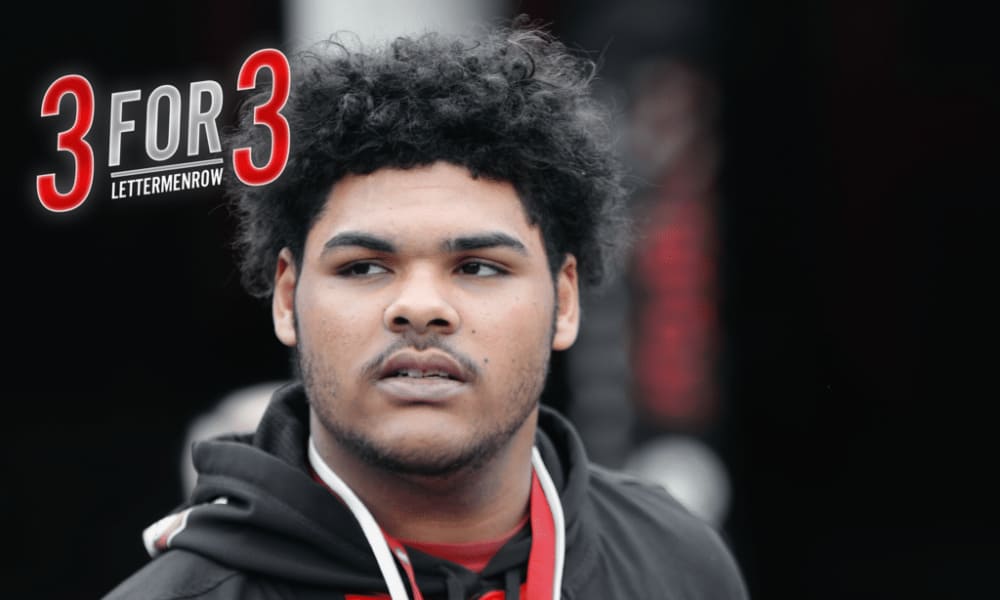 Darnell Wright remains at the top of the list...but is it a wish list?

Good Friday afternoon to you all, and welcome back for this week’s edition of 3 for 3 on Lettermen Row.

After talking about 5-star defensive end Zach Harrison a week ago, I’ve once again entrusted a few of my peers to provide their thoughts on some of Ohio State’s most pressing recruiting needs. Today, we’re focusing on a position that is a serious need for the Buckeyes in their 2019 class: offensive tackle.

Ohio State has three offensive linemen committed in this year’s recruiting class, but there’s absolutely no guarantee right now that any of them are set to play tackle in Columbus. The one that seemed most likely, Huntington (W.V.) Spring Valley’s Doug Nester, has been reclassified by the national recruiting services as a guard following his efforts in Dallas at The Opening, and he also told Lettermen Row that’s where he’d prefer to play.

I think Ryan Jacoby could play tackle, but he doesn’t have the natural tackle frame that Nester does, though he may have a better feel for the position right now. The third line commit, Georgia’s Harry Miller, is a future center for the Buckeyes.

There are a lot of potential options at tackle for Ohio State, but the truth is that right now it’s hard to know if there are any good options, and by that I mean players who are leaning toward the Buckeyes or likely to end up in Columbus.

Today’s question then is this:

What’s Ohio State’s best real option for adding another offensive tackle in the Class of 2019?

Let’s see what my friends Andrew Ellis of elevenwarriors.com and Marc Givler, from Rivals.com and BuckeyeGrove.com, have to say.

Even though 2020 is off to a roaring start, Ohio State needs to add at least one more pure tackle to the 2019 class. Right now it’s looking like the primary options are Darnell Wright, Trevor Keegan, Jonathan Allen, and Walter Rouse. The Buckeyes are in the running for all four, but I don’t think anyone would say they are in the lead for any of them except for Allen. The Dayton Dunbar product still needs a whole lot of development before he’ll be ready for the next level – and at this point in time I’m not even sure if he’s a take – but I do think he has some of the traits necessary to become a player at the position.

Getting Darnell Wright on campus last month was huge, but I still feel like the five-star will end up at Alabama or Tennessee. The Buckeyes can still get Trevor Keegan, though I’d give Michigan the edge right now. It’s probably too early to get excited about Rouse, but we will see how his upcoming visit goes. Jonathan Allen isn’t the best of the bunch but he is looking like the most realistic option at this point in time.

The upcoming visit of Walter Rouse is definitely something to keep an eye on.

Rouse really took off this spring and now has some of the top programs in the country after him. There is no question that Rouse lit up when he got his Ohio State offer and holds the Buckeyes in high regard even without making a visit at this point. Ohio State has to decide what it wants to do at this position but I think you can do a lot worse than Rouse who is an ideal tackle body with long arms and good feet and is not as raw as a guy like

Dayton Dunbar’s Jonathan Allen (who could also work his way into the class). They will no doubt chase Darnell Wright all the way, but Rouse is a guy who I think is a bit more realistic at this point.

I am of the mind that right now Ohio State actually needs two more offensive tackles in the Class of 2019. That means, likely, taking a dude that’s a project like Jonathan Allen. That said, I think it’s clear that a player like Darnell Wright, Walter Rouse or Trevor Keegan — and both Rouse/Keegan are developmental guys too — is extremely important to land alongside of him.

The preference, certainly, is Wright. He’s a 5-star prospect, the country’s No. 1-ranked tackle and the most ready to contribute in college. As Andrew said, though, there are concerns like Bama and Tennessee (his coach apparently is a Vols guy), to contend with. There is also the bizarre matter of his “rivalry” with Doug Nester. Whether or not that is ongoing, it’s been enough of a “thing” to cause the Buckeyes to fall behind other schools when they were, at one time, the perceived leader in this recruitment.

Rouse to me is very interesting. I think he’s a player that fits what Ohio State is looking for on and off the field. He’s considering schools like Duke, Virginia, Notre Dame, Stanford, etc. all of which are better academic schools than Ohio State is, but the Buckeyes football program combined with their enhanced academic pursuits make them a realistic option. Rouse isn’t a guy that’s enamored with the recruiting process, but is a relative newcomer to the national scene which helps Ohio State as they really begin to make a push for him next weekend when he makes his first visit to Columbus.

I’m with Marc here. I’ll take Rouse as the most realistic option to end up in Columbus with Allen.