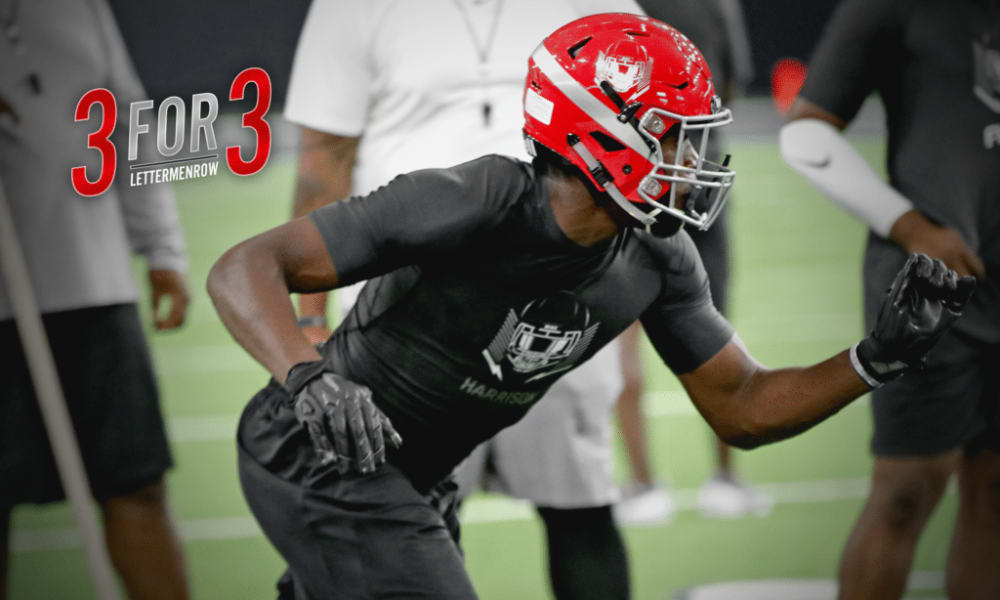 There are a lot of great places to get Ohio State recruiting news. Lettermen Row brings the best Buckeyes analysts to one spot for a pressing question on the Buckeyes every Friday at 3:oo p.m. What do your favorite recruitniks have to say about Ohio State and its pursuit of 5-star defensive end Zach Harrison?

Good Friday afternoon to you all, and welcome to the first edition of 3 for 3 on Lettermen Row.

If you followed me whilst I was at Land of 10, you’ll no doubt recognize this feature. It’s something I worked on over yonder and really enioyed doing for a number of reasons, first of which being that I truly think the best experience for the reader is to have multiple voices giving opinions occasionally as opposed to just me.

Yes folks, even I get sick of me.

Today’s initial foray into the minds of my peers in the recruiting business will focus on none other than Olentangy (Ohio) Orange 5-star defensive end Zach Harrison. Harrison is the country’s No. 3-overall prospect in the Class of 2019 and an absolute must-get prospect for the Buckeyes.

But as frustrating as it would be for Ohio State fans, today’s question is what if Harrison ends up choosing Penn State? Or Michigan? Where, oh where, will the Buckeyes turn? Ohio State has clearly been focused on adding only two defensive ends in its 2019 class, and it’s had one locked up for a while now in Mentor’s Noah Potter. The other is supposed to be Harrison, but again — what if?

I asked my good friend Andrew Ellis from elevenwarriors.com and Alex Gleitman of Bucknuts.com for their opinions on this very topic.

If Zach Harrison picks someone other than Ohio State, where do the Buckeyes turn at defensive end?

I actually thought this class would end up with three at the position, but it does seem as though the staff is aiming for just a pair of defensive ends — plus a versatile guy like Cade Stover. Losing Zach Harrison would be a fairly catastrophic occurrence for Ohio State’s 2019 recruiting class. It would be Jackson Carman times about 1000. There’s really no other way to put it.

All of that being said, if that were to happen then there are a few different directions the Buckeyes could go. I think the best bet would be trying to flip Mississippi State commit Ani Izuchukwu. The Buckeyes have done quite well in the state of Tennessee, and the Nashville defender is a player we discussed early on in the process. Interest seemed to fade a bit, but he’s a guy I feel Ohio State could have landed if a stronger push had been made. Westerville defensive end Dontay Hunter would be another option. He committed to Purdue last month, but I think the three-star could get a strong look through his senior season.

Of course there are a few other more highly-touted players like Georgia commit Nolan Smith and Michigan pledge Stephen Herron, but those would probably be pipe dreams at this point. For me, Izuchukwu would be the top realistic priority if the staff’s No. 1 overall target elects to side with Michigan or Penn State.

While he absolutely could play inside at the next level, many feel he has the ability to play outside at strong-side end given his rare combination of size and athleticism at around 275-pounds. If Reuben does move inside, you could see Ohio State try to push harder to get into things for guys like Khris Bogle or Lloyd Summerall or fall back to an option like Terrell Dawkins.

First, to comment on Andrew’s notion that guys like Nolan Smith and Stephen Herron are probably pipe dreams, I’d say that removing the “probably” is a necessary step. Those two aren’t happening, period. I do like the thought of Ani Izuchukwu. He was really impressive at camps in Columbus and was a kid that really liked the Buckeyes when it looked like the number at defensive end may be more than two.

I agree with Alex that Etinosa Reuben is a good choice to find his way into the Ohio State recruiting class. But at this point, I think he’s much more of an inside guy than an edge rusher, and that’s what the need would be if you lose Harrison since Potter fits more of the strong-side role. I am also a big fan of Florida’s Khris Bogle, but I think it’s too late for Ohio State to really make a push past the likes of Miami and Florida State there.

So, I’m going to throw a couple of names out there that have caught me eye. The first is Beau Robbins, an Indiana commitment from Carmel, Indiana. Robbins is 6-foot-4 and 240-pounds and a Top-300 player overall.

For the second name? I’m going really far from Ohio all the way to Belgium and talented athlete Sylvain Yondjouen. Yondjouen camped in Columbus in June and worked out at defensive end and tight end with the Buckeyes. He’s really raw but it’s clear to see the athleticism of the 6-foot-4, 232-pound European.