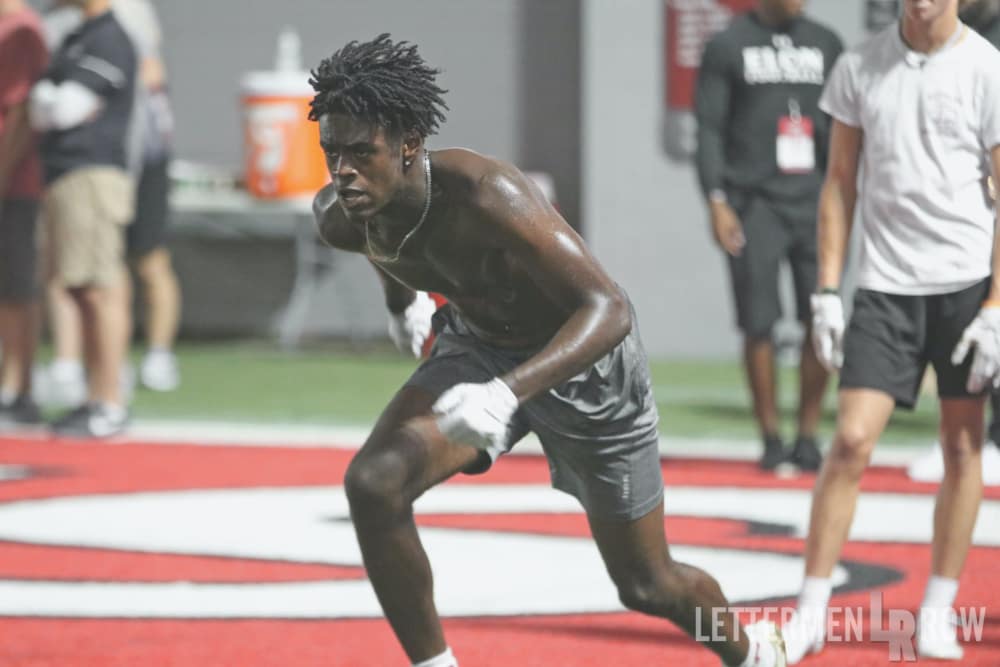 Lance Wilhoite impressed at Ohio State on June 8, but is there room with the Buckeyes? (Photo: Birm/Lettermen Row)

Lots of WR options out there, with many visiting this weekend.  I won’t ask you to put a percentage on them, but based on most likely to be a Buckeye to least likely could you rank the following: Marcus Washington, Jameson Williams, David Bell, Elijah Higgins, Lance Wilhoite, Trey Knox and Wandale Robinson (I’m tossing him in here as he may translate to the H)?”

Thank you for not asking me to put percentages on them, because the answer here is a coin flip on each. Either they’ll come to Ohio State eventually or they won’t, amirite?

Sarcasm aside, I think you’ve got a pretty good handle on the list of targets at wide receiver, though I’d add California’s Kyle Ford. Even if he’s not visited yet, he’s a guy Ohio State staff would love to have on campus and build a real relationship with moving forward. I don’t know that they’ll have the chance to do that, or if they will have the need when its all said and done. But he’s a player on the list anyway.

Beyond Ford, I think this coming weekend at Ohio State is going to go a long way toward de-cluttering a crowded mess of a recruiting picture at wide receiver.

The Buckeyes will host Marcus Washington, Jameson Williams and Elijah Higgins for official visits. They will see Indianapolis Warren Central wideout David Bell for an unofficial visit on Saturday. Wandale Robinson visited Columbus last week, and as you said, he’s more of a slot-receiver and return guy — not a pure wideout. Lance Wilhoite camped at Ohio State on June 8 and was really good, but I think right now he’s a rung below the main group, which includes Washington, Williams and Bell.

That leaves Higgins, who has recently tripped to Florida and Auburn. He’s close to Buckeyes commit Garrett Wilson, but I’m not entirely convinced that Higgins – like Trey Knox – doesn’t end up at tight end in college, and it’s impossible to know how he views that kind of possible transition.

Heading into the weekend – and to answer the question without any more rambling – here’s how I see the wide receiver totem pole (excluding Wandale Robinson).

That’s just my list and certainly not gospel, but we’ll have a much better idea of exactly where things stand in the next few weeks. I believe right now the Buckeyes would like four wide receivers in the Class of 2019, but they’re not going to reach for guys that don’t fit the system.