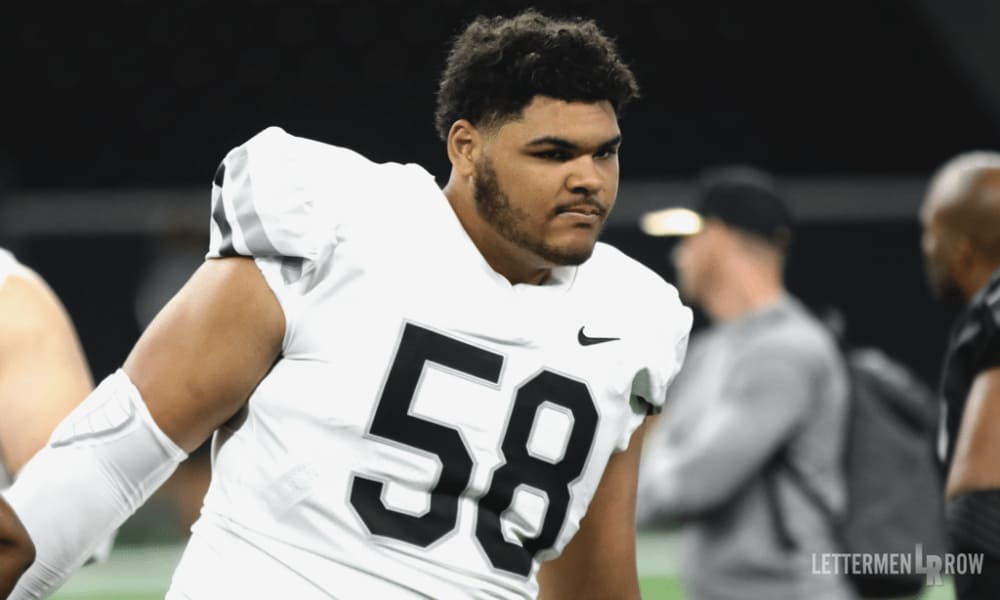 The Buckeyes still have work to do if they want to land 5-star OL Darnell Wright. (Birm/Lettermen Row)

Happy Thursday folks, welcome back to the daily recruiting question portion of our program here at Lettermen Row.

Options in 2019 for OL seem to be dwindling (Wright, Allen, Rouse) whereas 2020 could be a banner year. Are we okay striking out other than Allen and focusing on next year?

It does feel like there aren’t a whole lot of options remaining for Ohio State, doesn’t it?

As you know, right now, there are three commitments on the offensive line: Harry Miller, Doug Nester and Ryan Jacoby. This is a pretty good group which includes two Top 100 prospects in Miller and Nester.

That being the case, it’s pretty clear that Ohio State wants — and in my opinion needs — one, or more likely two, additional commits at this position.

Last Friday, Andrew Ellis of elevenwarriors.com and Marc Givler of BuckeyeGrove.com shared opinions on who could still be a real option at tackle. We all agreed that right now Ohio State is trailing a couple of schools, including Alabama and Tennessee, for 5-star offensive tackle Darnell Wright. Does that mean Wright is a lost cause? Hardly. Ohio State has been involved in his recruitment as long as anyone and has a geographical advantage over each of those two schools. Yes, there’s the bizarre “rivalry” with Nester but it appears that has been mostly squashed.

The Buckeyes chances are definitely not dwindling with Washington (D.C.) 3-star Walter Rouse, who made his first visit to the school on Wednesday (update coming in tonight’s Dotting the ‘Eyes), and in fact, I’d say their odds are going up in this recruitment. He’s a really good young player and a prospect that isn’t as likely to be concerned about immediate playing time (that may not be available in 2019) as a guy like Wright. He’s a perfect fit for what the Buckeyes want to do on and off the field.

Ohio State is the team to beat for Dayton’s Jonathan Allen, but he’s still waiting on the green light to commit it could be a while until that happens.

Those are the primary options right now at tackle, but I think you still could see an additional interior lineman join the fold for Ohio State in the 2019 cycle as well and there are three names I think bear watching in the future.

The first is Baltimore Darrion Dalcourt. He’s been on record saying that Ohio State and Alabama are recruiting him harder than any other programs and the Buckeyes aren’t doing that just for fun. if they’re still pursuing him at this point with three guys already committed that could play on the inside of the line, it’s for a reason.

The same can be sad for Mentor (Ohio) lineman Nick Samac, who is a Michigan State commitment. He’s a teammate of Jacoby’s (and Noah Potter) and a guy that the Ohio State coaching staff has been keeping close tabs on.

The final offensive line option — and another guard — that is still worth paying attention to is Nokesville (Va.) 4-star Jakai Moore. He visited the Buckeyes in the spring and has been high on Ohio State since, despite not yet returning to campus. If he makes it through expected visits to Penn State and Clemson over the next week without issuing a commitment, things could really heat up with the Buckeyes as the 2018 season rolls around.

There aren’t a lot of slam dunks out there for Ohio State right now, but the well isn’t dry yet for Urban Meyer and offensive line coach Greg Studrawa.