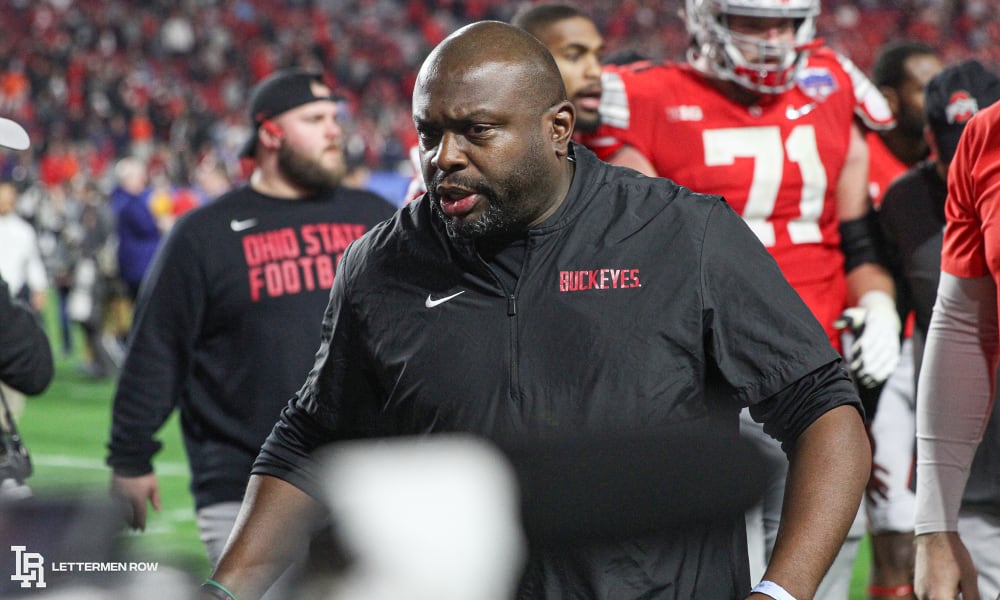 Tony Alford and Ohio State are content at running back, but Jahmyr Gibbs may have too much talent to ignore. (Birm/Lettermen Row)

Have a question about Ohio State recruiting? This is the place for you, five days a week. Submit your questions on Twitter or on the Lettermen Row forums. Check-in daily to see what’s on the mind of Buckeyes fans all over the country. Today’s question asks about Dalton (Ga.) 4-star running back Jahmyr Gibbs and whether or not the Buckeyes have a realistic chance at landing him.

We have a shot with Jahmyr Gibbs?

It’s just not a good shot.

The good news for the Buckeyes is that there’s going to be an opportunity to change that.

During the season, Ohio State hosted the Georgia Tech commit for an unofficial visit, and following that trip he immediately began to plan a return for an official visit. That trip has been set for the weekend of Jan. 17, despite a recent mixup where Gibbs had thought he could move it up a week in order to squeeze in a weekend jaunt to LSU. Of course, moving it up a week would’ve meant putting the visit on Jan. 10, but that weekend is in the recruiting dead period and therefore can’t happen.

So Jan. 17 it is. And from the Buckeyes perspective, that weekend will be focused on Gibbs entirely. With the decision of J.K. Dobbins to leave for the NFL, Ohio State finds itself looking for the next big thing at tailback from a solid roster group that will include Master Teague, Marcus Crowley, Steele Chambers and Miyan Williams. That’s a redshirt sophomore, two redshirt freshmen and a true freshman for those keeping track at home.

Yet, Gibbs remains clearly in the plans for the Buckeyes if he were interested.

Why go after a player and a position that isn’t really a need for Ohio State at this point? Because the upside and talent of the 5-foot-11, 200-pound Gibbs is different than anyone on the roster. Gibbs, a finalist for the All-American Game Player of the Year, has maintained a low-profile in his recruitment, and that kept a number of schools around the country from catching onto him earlier in the process. That’s not the case anymore.

Between now and the February signing day, Gibbs will have a number of tough choices to make. LSU and Alabama are the likely losers in the Zach Evans sweepstakes, and that means each program will crank up the heat on Gibbs — especially LSU. The Tigers do not have a running back in their 2020 class and obviously want one, and that rush by Gibbs to set up a trip to Baton Rouge on the weekend he’d already arranged for one to Ohio State can’t be viewed as a positive.

Following the unofficial visit to Columbus in November, the buzz around Gibbs was clear: It didn’t matter how much he liked his trip because the likelihood is that he would stay close to home for college. That is still the belief with two weeks left before the official visit is supposed to happen.

Can a great official visit to Ohio State change that? Tony Alford, Ryan Day and the Buckeyes have been involved in this recruitment much longer than LSU, Florida and other top-ranked programs. Ohio State has not been involved as long as Georgia Tech, and the Yellow Jackets shouldn’t be dismissed in this recruitment just because other, more successful football teams are involved.

The first step for the Buckeyes is the first step: Make sure that official visit happens. At that point, anything is possible. The odds may not be in Ohio State’s favor, but Jahmyr Gibbs isn’t visiting Ohio in mid-January just for fun.

Continue Reading
You may also like...
Related Topics:Featured, jahmyr gibbs