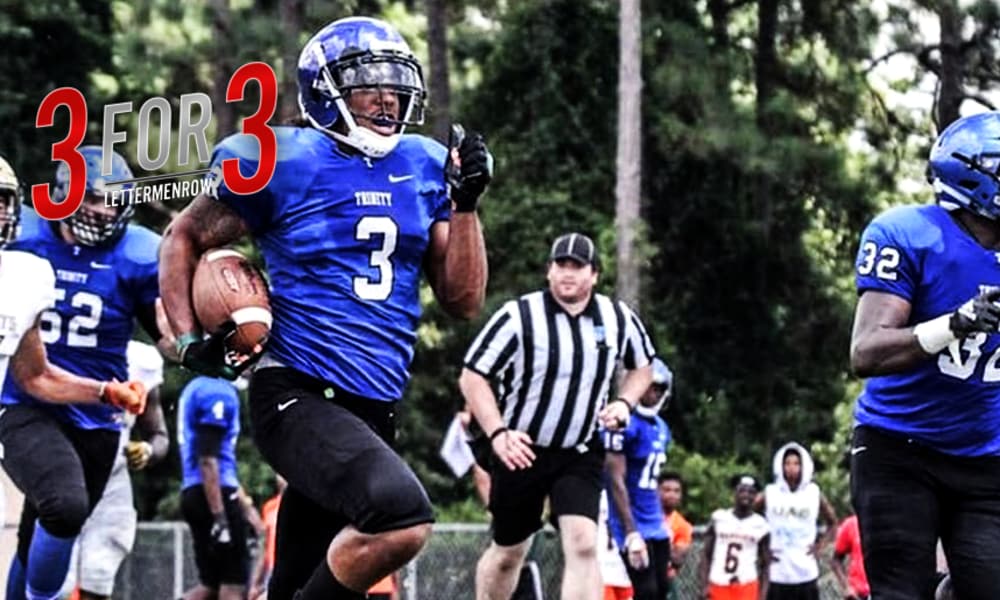 A flip from Miami commitment Marcus Crowley would give Ohio State some much needed recruiting momentum. (247Sports/Courtesy)

There are a lot of great places to get Ohio State recruiting news. Lettermen Row brings the best Buckeyes analysts to one spot for a pressing question on the Buckeyes every Friday at 3:oo p.m. Check in weekly for thoughts from some of the country’s most respected college football recruiting analysts about all kinds of Ohio State-related questions. This week we’re discussing the Buckeyes lack of recruiting momentum and who could be the next player to pick Ohio State in 2019.

Since the drama around Zach Smith and Urban Meyer broke at the end of July, Ohio State has landed two commitments in its 2019 recruiting class and has also lost two.

To put it bluntly, there’s been a whole lot of nothing going right for the Buckeyes on the recruiting trail since the summer. Why that is, exactly, is up for debate. But speculation about Meyer’s future with the Ohio State program is definitely a leading contender among the reasons.

This weekend, the Buckeyes will welcome in a handful of big-time prospects from the Class of 2020 and two of the programs most important remaining prospects in the Class of 2019, 5-star defensive end Zach Harrison and 3-star running back Marcus Crowley, who is committed to Miami. It’s a pivotal weekend for Ohio State as it looks to kickstart its recruiting class with the first signing day period now just about seven weeks away.

Who is going to be the player that jumpstarts the Buckeyes recruiting momentum? When will they do it? That’s the focus of this week’s 3 for 3, once again with the assistance of Andrew Ellis of elevenwarriors.com and Marc Givler of BuckeyeGrove.com, a part of the Rivals.com network.

Who will be Ohio State’s next 2019 commit and when?

This has been a strange recruiting cycle for a number of reasons, and I feel like we’re in one of those stages where it’s increasingly difficult to pinpoint who’s going to be next for Urban Meyer and the Buckeyes. This weekend is a big one for Tony Alford as both Marcus Crowley and Deondrick Glass head to Columbus for official visits. Then later on in the month, we’ll have plenty of visitors for the Michigan game and a player like Kentucky commit Cavon Butler could be on flip watch at the time.

My guess right now would be on one of the running backs being the next commitment. I know the staff is enamored with Marcus Crowley and he certainly doesn’t seem 100 percent sold on Miami, so my vote goes to the Jacksonville tailback being the next 2019 pledge. As far as when that happens? I’ll go out on a limb and say he visits this weekend, opens his recruitment back up, and then is a part of Ohio State’s class by the middle of November. That’s a total guess on my behalf, but honestly there just isn’t anything imminent right now; at least not from what I can see.

This is a tough one because so many of the guys that Ohio State is pursuing right now are kind of holding off on worrying about a decision until the after their season. You almost have to factor in high school playoff success chances into the equation here.

I tend to think the next commit is going to come from within the state of Ohio and from the group of three recent offers in Cavon Butler, Tommy Eichenberg, and J.D. Duplain.

I’ll go with Eichenberg here because I think Ohio State stands in a better spot with Tommy than it does with Duplain and I think Butler might be a situation that goes a little further into the winter as some other things are sorted out there. I would expect Eichenberg to make a visit to Ohio State for the Michigan game at this point so we could be at least a few weeks off from seeing any movement.

So much of this answer comes down to timing, because right now, there isn’t any one player in the Class of 2019 that I would say I feel entirely optimistic about a commitment coming from in the immediate future. If Ohio State hits a home run with Crowley this weekend, I do think that could change, but that’s a hard sell when you’re talking about flipping a kid from Florida that’s been committed to a home-state school for more than a year after just one visit to Columbus.

There is a better shot to land Deondrick Glass, the 4-star running back from Katy, Texas. I believe the odds are better if the Buckeyes decide to make a more serious push to land Glass because he’s not committed anywhere else. Glass is taking his official visit to Ohio State this weekend alongside of Crowley, so there’s an interesting side-game there, potentially.

I think the more likely outcome is one of the Ohio prospects committed elsewhere right now ends up flipping his verbal to Ohio State. That said, I don’t think that happens until the Michigan game at least, because that’s the weekend that Toledo’s Cavon Butler and Cleveland’s Tommy Eichenberg will visit the Buckeyes next. When, or if, Strongsville offensive lineman J.D. Duplain visits is up in the air, but Clemson is also getting in the mix for him. Because of that, a later final decision is possible.

The most important Ohioan not named Zach Harrison, and honestly maybe equally important at this point, is Eichenberg. Ohio State will have to fight off Michigan and Boston College to land him, and there’s no guarantee it works. Still, I believe Eichenberg is the most likely to be the next commit.