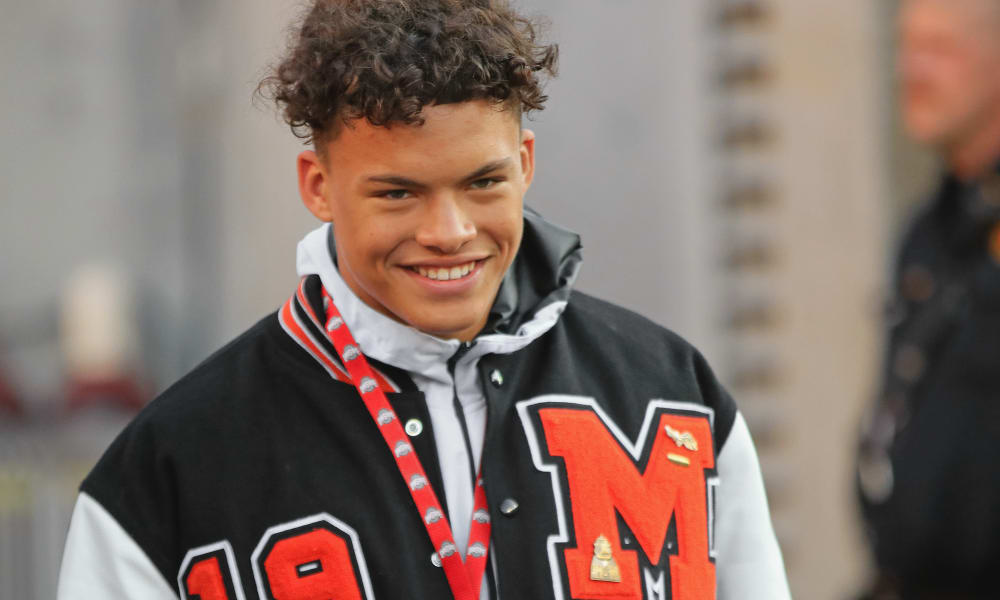 Massillon's Jamir Thomas is one player that has been a regular at Ohio State camps for the last three years. (Jamir Thomas/Courtesy)

Have a question about Ohio State recruiting? This is the place for you, five days a week. Submit your questions on Twitter or on the Lettermen Row forums. Check in daily to see what’s on the mind of Buckeyes fans all over the country, like today as the discussion looks at under-the-radar recruits.

Hi again. It’s me, the guy who writes these columns every day. Hope you’re all doing swell. Today we’re going to try and work a little bit away from the Urban Meyer-related drama at Ohio State and instead focus on the actual state of Ohio and the Buckeyes recruiting efforts therein.

Any "under the radar" kids from Ohio that you would like to see get an offer?

First of all, congrats to Jerm, this is your second #RecruitingQuestionoftheDay this week. I hope your parents are proud of you, as I know I am.

Ohio State has, right now, 15 commitments in the Class of 2019. Of that group, only Ryan Jacoby, Noah Potter and Cade Stover are from Ohio. That’s not good if you’re somebody that wants to see your favorite team represented by home-state kids.

There are a couple of reasons for the steady decline in Buckeye State prospects ending up at Ohio State. But for this year specifically, we’ll start the most obvious: The national recruiting class isn’t nearly as good as it’s been in recent years and Ohio’s class is affected similarly.

Using the 247Sports.com recruiting database, you’ll see that Ohio State has only “offered” nine prospects from Ohio in the Class of 2019. Three are committed. Zach Harrison and Jonathan Allen remain on the market. Nick Samac (Michigan State), Jowon Briggs (Virginia), Nolan Rumler (Michigan) and Zeke Correll (Notre Dame) all decided to matriculate elsewhere, though Samac was offered after he committed to the Spartans and Rumler was never considering any school but Michigan. Briggs wasn’t aggressively recruited and Correll, while the Buckeyes wanted him, became much more of a bonus than a need when Georgia’s Harry Miller picked Ohio State.

As of today, there are no players in Ohio outside of Samac, Allen and Harrison that I think the Buckeyes would say yes to bringing into the fold. That does not mean things can’t or won’t change. Change likely becomes a necessity if Urban Meyer is for some reason not retained by the school.

What rising-seniors in Ohio could get a look? Here are a few names that I think would be considered.

At running back, I really liked Warren G. Harding (Warren, Ohio) tailback KayRon Adams when I saw him at an Ohio State camp this summer. I also am a fan of Archbishop Alter’s John Bivins, who at 6-foot-1 and 205-pounds, really looks the part of a Big Ten running back. He suffered a torn ACL as a junior that has kept his recruiting profile lower than it would be otherwise.

Solon wide receiver Trevon Raphael has a ton of potential but is as raw as it gets, especially catching the football. Purdue commit Mershawn Rice is another player I think could get a longer look by the Buckeyes if things don’t work with top targets like Jameson Williams, Wandale Robinson and Elijah Higgins.

I think Ohio State could definitely find itself circling back on a couple of defensive tackles later in the process, similar to what happened in 2015 with Davon Hamilton and Robert Landers. Columbus’ Rodas Johnson (uncommitted), DeWayne Carter (committed to Duke) and Springfield’s Isaiah Gibson (uncommitted) could all get a look. Gibson has picked up offers recently from Georgia and Florida but hasn’t earned one from Ohio State yet despite multiple camp appearances over the years. Kentucky commit Cavon Butler from Toledo Whitmer also falls in with these guys.

The Buckeyes have at least three linebackers committed at the moment, and unless one changes their mind in the near future, they’re probably done at the position. If that does happen though, there are a couple of players in state that can play ball at a high level. There’s St. Ignatius Tommy Eichenberg (committed to Boston College), and I’m a major fan of Jestin Jacobs from Northmont High School in Clayton. He’s committed to Iowa and I see him as the type of prospect that people will be asking “How’d he get out of Ohio” about in a few years. Massillon’s Jamir Thomas is the state’s 10th-ranked prospect according to 247Sports.com but he’s another player the Buckeyes have  to this point not offered.

Michigan State commit Luke Fulton from Youngstown Cardinal Mooney is the prototypical Northeast Ohio-born linebacker too, he’s going to be a leader for the Spartans down the road. Dezman Cooper, a 3-star prospect from Reysnoldburg, is a Buckeyes legacy that has intriguing talent as well.

As you can see, there’s a lot of talent in Ohio. But Ohio State has chosen over the years to focus more nationally. That’s played out pretty well for the Buckeyes under Urban Meyer, hasn’t it?